251: CONNECTION TO THE BREATH OF LIFE or Hā:

This past weekend, the members of the LDS Church gathered for their semi-annual General Conference. The Sunday session was on April 6th, an important date for many reasons.  In 1830, The Church of Jesus Christ of Latter-day Saints was organized on this date.  The Church has come along way since then.
The purpose of the restoration was to once again connected man with God, and not necessarily to connect man to a Church. The main purpose in establishing a church is to gather and to teach others to connect with God. The church should be the means to the end, and not the end itself.
I watched all five sessions of General Conference. I find it fascinating to see what is spoken by those sustained as prophets, seers and revelators. I always pray that they will  magnify their callings. I take notes on what is said, and also what is not said. Here are a few thoughts:
The first speaker after President Monson's opening remarks was Elder Jeffrey R Holland. At the end of his talk he bore his testimony by saying “I bear witness of the Church, with a particular witness of restored priesthood keys.” I found the wording to be interesting. I compared that with the testimony given by Elder Boyd K Packer. Even though his testimony was pre-recorded, I appreciated Packer's testimony of our Savior, Jesus Christ. I think this might be one of the last time we hear him speak, if not the last.
One of my favorite quotes from conference was given by Jean A Stevens, the First Counselor of the Primary General Presidency:

“Gospel is not weight, it is wings. It carries us. The Gospel is not a checklist of things to do, but rather it lives in our hearts. “

It is interesting to compare this quote that "the Gospel is not weight" to a talk given by Elder Bednar. He used the analogy of if you get "stuck in the snow", the solution is to pile on more weight (like a full load of wood in the back of 4x4 truck). The weight of this full load of wood would then help me free myself.


Also, I found it interesting that almost every talk mentioned how blessed we are to be led by our living prophet Thomas S Monson. He was prayed for, thanked, quoted, honored, and sustained and called beloved.  When he was introduced we were told that it would be our privilege to hear him speak.

anyway.. I digress. I feel to share something else.

Early Sunday morning while everyone was still asleep, I headed up into the mountains before Conference. For me, this is where I can connect with God.. I am grateful for the connection I have with Him. I am also very grateful for friendships with those who I share this journey with. It is a blessing to me to have friends to teach me.  Here is one thing that I was taught on April 6th.

The Breath of Life:

When the Lord puts His spirit upon you, like the Lord breathing into Adam the breath of life, it doesn’t mean that he is making Adam's lungs work. It has nothing to do with that. It means that He is putting part of His essence into Adam. This essence of God enabled Adam to be able to progress, identify and connect with God.

In ancient times Hawaiians greeted each other by the “honi”.  The "honi" is when two people greet each other by pressing noses  and foreheads together and inhaling at the same time, essentially sharing each other's breaths. This is very symbolic since it represents the exchange of “ha”--the breath of life, and “mana” - spiritual power between two people.

When the foreigners ( or white man) came to the island of Hawaii, they were referred to as “Haoles”. This is because the white man wanted to greet the Hawaiians with a hand shake instead of with the sacred “honi”. The term "Haole" is derived from "ha-ole", literally meaning "no breath". The Hawaiians called the foreigners Haoles because the foreigners backed away and were uncomfortable with the "honi" greeting, and so the foreigners were described as "breathless." The implication is not only that foreigners are aloof and ignorant of local ways, but also literally have no spirit or life within.

The word  "Aloha" is also connected to the word "ha". Aloha is a very serious word and if you don't mean it, don't say it. You see, "alo" is of deity. It's like a forward call to deity. "ha" is the breath of life.  The direct translation is 'may you have ever-lasting breath.' The word has real deep meaning for the Hawaiians. It is common for the Hawaiians to say aloha and then greet each other with the honi so they could connect as they breathe in each other's breaths.

I love Hawaii. I love the people of Hawaii, and I am grateful to be taught by my Polynesian brothers.

In further study since my experience on Sunday morning. I learned the following.

Yahweh is written in Hebrew letter as YHWH. or יהוה. The most prominent letter is H. To make the sound of the “H” you have a give a breath.  The sound/letter of H in Hebrew means wind, breath, spirit, or honor.   When you make a covenant with someone you share their name. So when the Lord said to Abram. I am going to make a covenant with you. The Lord takes that letter H from His name and puts it into his name Abram and and it becomes Abraham… Sara become Sarah. We can even see in the name Matt can become Matthew.

Visually the letter H in cursive even looks like wind, or breath. 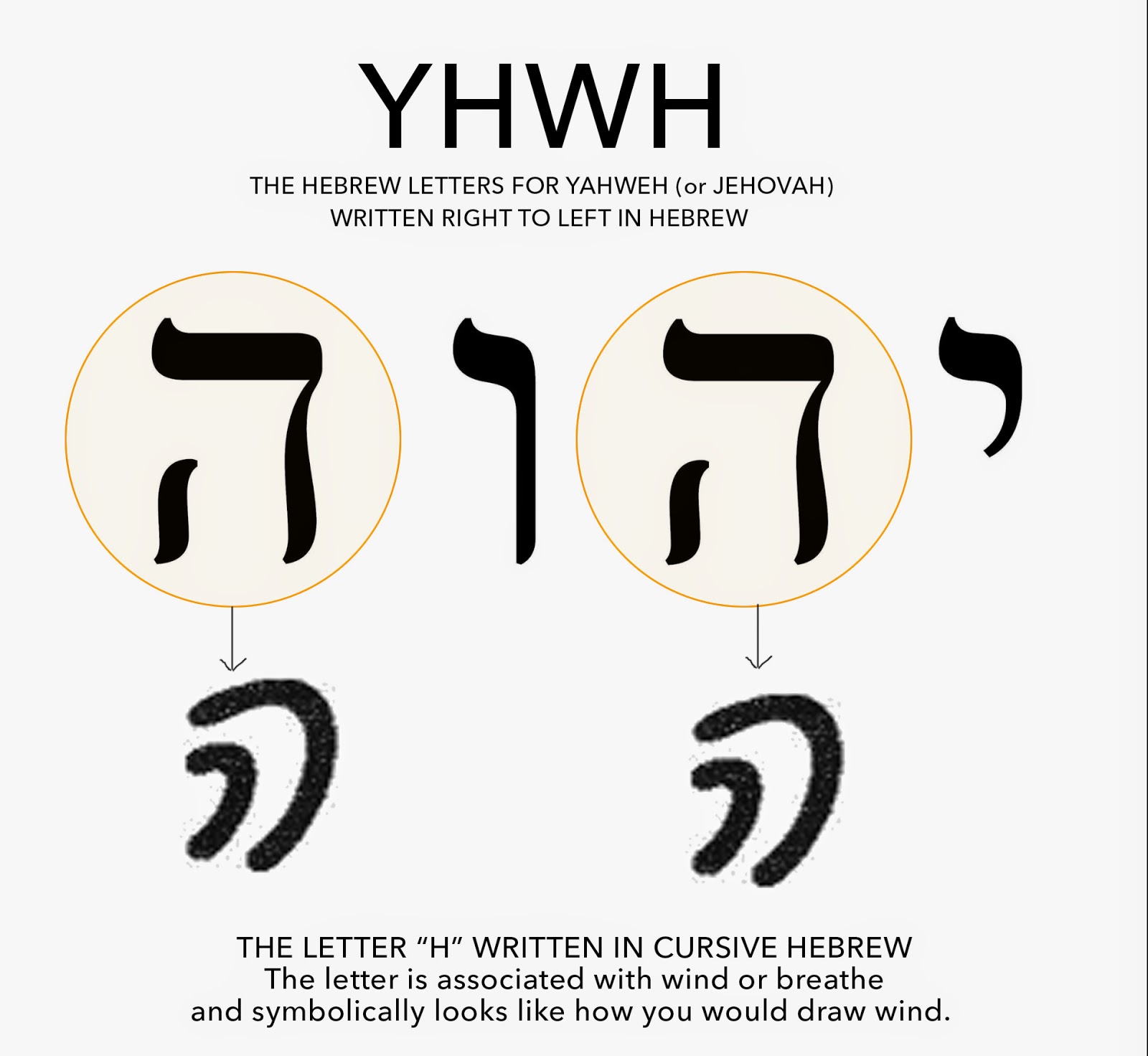 Just a thought.. an ember can ignite again with a gently blow of  breathe. And the only way a fire can remain burning strong is to have the "breath or wind" constantly "blowing" upon it. If there is no air/wind, the ember will not ignite and it will eventually go out.