190: ASCENDING BEFORE THE STORM

After posting the last blog, a friend sent me some additional information about Homer's 'The Iliad and the Odyssey'. For those who have not read the epic tales, the Iliad is tragic tale, while the Odyssey is more hopeful. The Odyssey describes a man who journeys far, and even though he suffers much while trying to return home,  it ends in harmony and acceptance.

The Iliad and the Odyssey do have a few things in common. They both deal with the struggles and hardship of mortal life. They both deal with the gods interceding in human affairs. The mortals in both stories have to struggle against fear, anger, and other ego-based emotions of human existence. Both stories give us insight into the minds of the inhabitants of the earth during this time period and their perception of reality. The reality of the “gods”, angels and heavenly messengers, was common knowledge for most people during that time. Today, the existence of the gods is dismissed by most, questioned by many, and known by few.  I wonder if it is our choice.. whether our journey will be more like the Iliad or more like the Odyssey. I wonder if one of the factors depends on if we truly know God.

The following is a brief account of a personal experience of hiking what is called the "Stairway to Heaven". It is also known as the Haiku Stairs which entails climbing approximately 4000 vertical stairs that ascends skyward over the towering ridge lines of a volcanic mountain range. These stairs were constructed during World War II and were originally wooden ladders spiked into the steep Hawaiian cliffs in order to build a radio transmission tower at the summit. The radio antenna on the tower was capable of transmitting very low frequency radio signals which could actually reach US Navy submarines across enemy lines, as far away as Tokyo Bay even while submerged.

After the war, these "stairs" became a popular hike. However, due to safety and other concerns, the station and trail were closed to the public in 1987. Access to the stairs is prohibited, and a guard is stationed at the bottom of the stairs to make sure hikers do not attempt to climb the stairs anymore.

Here is a view of the stairs to give you an idea of what the hike entails. 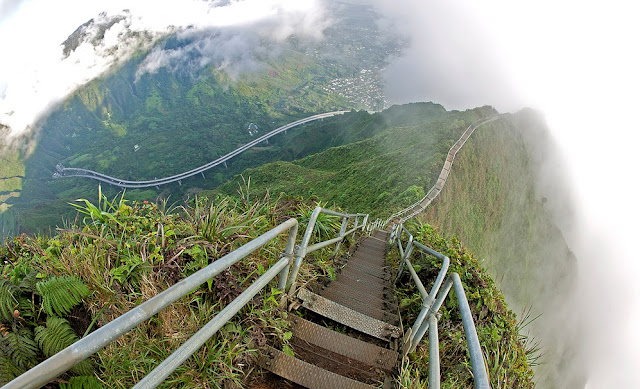 Here is a photo of trailhead before reaching the Stairway to Heaven. The peak of the mountain is not visible because of the clouds. 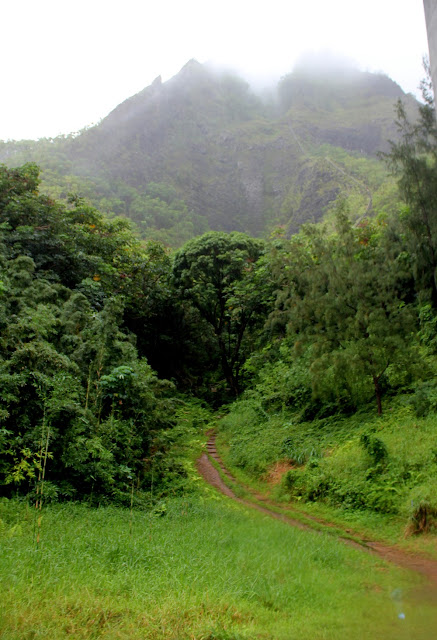 Here is a photo of a portion of the stairs. 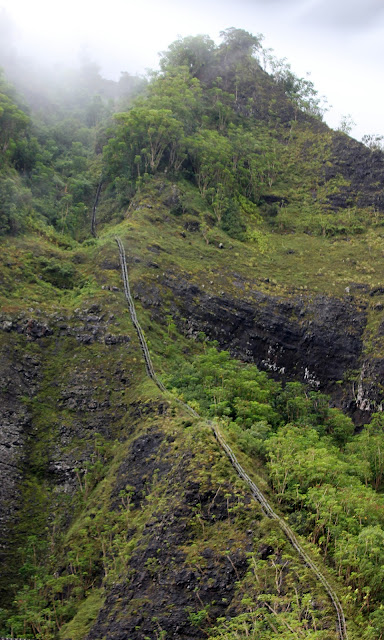 One of the ridges along the hike. There are parts along the way where you descend only to then ascend higher along this very steep and what feel like a razor thin ridge line. 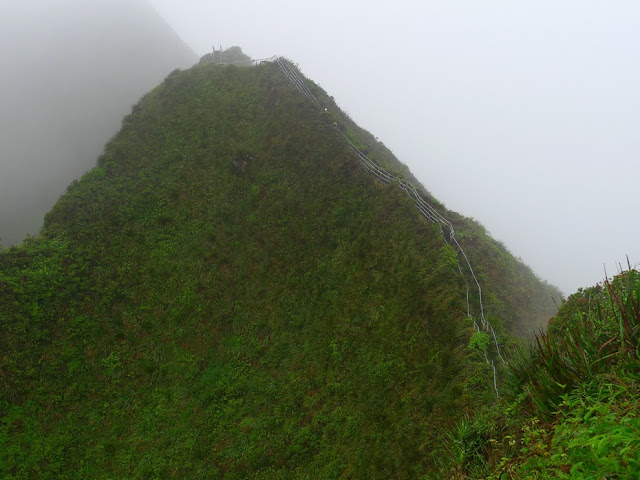 ...
On our recent "odyssey", I hiked the stairway to heaven twice. The first time was with my adventurous and amazingly strong wife. The day we hiked it, we woke up around 2:30 AM, drove as close as we could get to the stairs and began our  hike into the jungle at about 3:30 AM. We were fortunate enough to have arrived at the same time as 5 others who also were attempting to hike it that morning. A member in their group had hiked it before and knew the best path in the jungle to get to the stairs. We were grateful since it was extremely dark and we possibility could have gotten lost. When someone has actually been to a place or experienced something before, they make for a good guide. When someone claims they know the path but has never taken the path.. they are a false guide.

All of us hiking had headlamps fastened to our forehead. It would have been impossible to hike this trail without your own personal light. You could not rely on someone else's light. It would be too dangerous. My wife and I also brought reinforced gloves to help us hold on to the handrails which is your only source of security to avoid falling. We reached the stairs before the guard and  bypassed  the security gates and fences. As we began climbing the stairs, we noticed more hikers above us that had begun the hike earlier than us. It was helpful to see their lights above us to see the direction we would be heading up.

About 30 minutes into the hike, I was sweating profusely, not only because of the humidity, but the intense never ending "Stairmaster" workout. While I knew it would be steep, I was unprepared for how steep it got. Completely vertical. It was more like a ladder than stairs. One slip and there was nothing to stop you below, and if there was another hiker behind you, you would take them out as well.

At literally the steepest part of the climb, the strap to my wife's headlight somehow came unattached. While trying to grip the handrail with one hand and try and fix the strap with the other, my wife tried to fix her lightsource.  I used my headlamp to help give the needed light for my wife to correct the problem with her light source. After several minutes of intense fear, my wife fixed her headlight and we began climbing again. Prayers were answered.

We finally  reached the first of five platforms and enjoyed the needed time to rest our legs and drink some water before we got too dehydrated.

From this first platform, we could see the road and city lights below us and could see car lights of the guard who was now on duty. After our much needed break, we continued on our ascent. By this time, clouds has rolled in and it started to rain heavily. It never stopped. This made the stairs and handrails very slippery. We needed to climb with extra care, with patience, with long-suffering, and with persistence to make it to the top. One step at a time. You could not hurry or try to skip a step, even if you thought you could. The risk was just to great and it was not worth potentially slipping and falling.

We reached each platform and rested at each station until the final push to the top. I never lost the hope that the storm would pass and we would reach the summit in time to see the sunrise. We finally made it to the top before 6:00 AM, after hours of never ending stair/ladder climbing. Tired, wet, and cold, we waited in small enclosed area of the abandoned communication tower. There were others that had made it to the top as well before us... all waiting for the storm to break and for possibly seeing the sunrise. I had brought an extra set of clothes to change into. I was grateful that I had done so,  since I was wet to the bone. Now with dry clothes and no longer cold and wet, my wife and I huddled together. The clouds were still thick at the top and the wind was blowing hard. We made the decision that we needed to get back to our kids and could no longer wait to see if we could get a glimpse of the sunrise. As we descended, I could feel the presence of the sun that it was now visibile. It was no longer dark and we no longer needed our flashlights. However it continued to still rain.

The descent was just as difficult as that ascent. In fact, it some parts it was more frightening. Instead of constantly looking up, we were looking down and could see the peril. It was slippery as well, and one dumb mistake could cost you your life. In fact, some hikers in front of us had lost some of their equipment including their glasses, making it hard for them to see.

After about 2 hours of descending carefully, we made it to the bottom. My wife and I were very glad to had this experience especially without injury.  A few days before our odyssey would come to an end, I climbed the "Stairway to Heaven" once again, but this time I hiked it with "my brother." We hiked it on the morning when the Tropical Storm Flossie was due to hit the island. The prompting to "ascend before the storm" was heeded and I am grateful for the blessing, the inspiration, and personal revelation that I received on that second hike. We were able to summit and descend before the storm came. Here is a photo that I took as I was driving home and I could see that the storm was now approaching.

Here is a view of the top of Stairway to Heaven mountain that you summit. 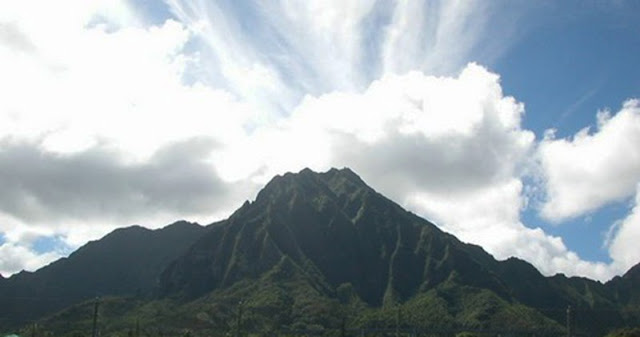