340: CHANGING THE ORDINANCE, REMOVING THE SYMBOLS and MODIFYING THE WORDS


The trick to successfully pulling off an apostasy is to distract people into thinking there hasn't been one and that all is well in Zion. When apostasy is noticed, acknowledged and exposed, then it is possible to repent and return. Until then, we remain blind and most likely will continue to discard and reject the things of the Lord.

Elder Jeffery R Holland declared in February of this year that the Church is immune to error and will not fall into apostasy.

“Ours is that fail-safe, inexorable, indestructible dispensation of the fulness of the gospel… Unlike every other era before us, this dispensation will not experience an institutional apostasy; it will not see a loss of priesthood keys; it will not suffer a cessation of revelation from the voice of Almighty God. Individuals will apostatize, they may turn a deaf ear to heaven, but never again will this dispensation collectively do so. What a secure thought that is! What a day in which to live! What a way to cut through fear or faintheartedness”


However, Christ’s own words in the Book of Mormon predicted that at some point the latter-day gentiles would reject the fullness. (3 Nephi 16:10) We also read that we also fall into apostasy when we change or alter the ordinances that the Lord has given us.

The adversary succeeds when he manages to get us to not reject ordinances, but to change them. As soon as they are changed, they are broken. (D&C 1: 15.) "For they have strayed from mine ordinances, and have broken mine everlasting covenant." That is an important step towards apostasy, because then religious people can continue to claim they follow a true religion, while practicing one that has been broken. These practitioners become like the ancient Jews, who mocked Lehi because they knew they were still righteous. They knew Lehi was foolish, even fraudulent. They thought it was humorous when Lehi preached the idea. Because they were so very religious, so devout, so unassailably active in following God, the idea was absolutely laughable that they were apostate. They still had the truth, the ordinances, the temple, and the priesthood. (excerpts from a blog post entitled The Trick to Apostasy)

Here is just one example of an ordinance that we have changed: The sacrament.  Not only have we changed the words, the symbols, but also in the manner in which the sacrament is administered. In my opinion, it has lost its sacred qualities. That is a perfect example of changing an ordinance. While it maintains the appearance, it is hollow without the sacred symbols. (It should be noted that these changes are minor compared the changes made to the Temple Ordinances after I took out my endowments prior to 1990's) 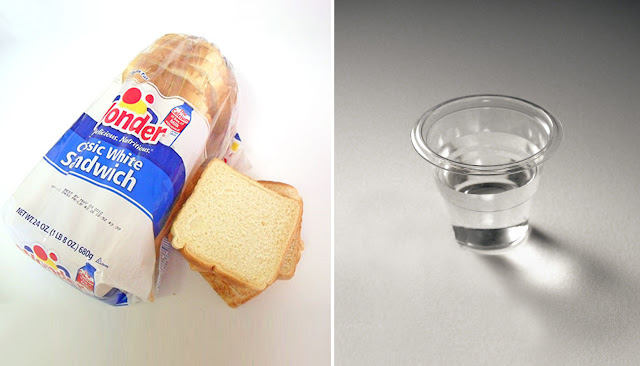 The Emblems of the Sacrament in Scriptures: 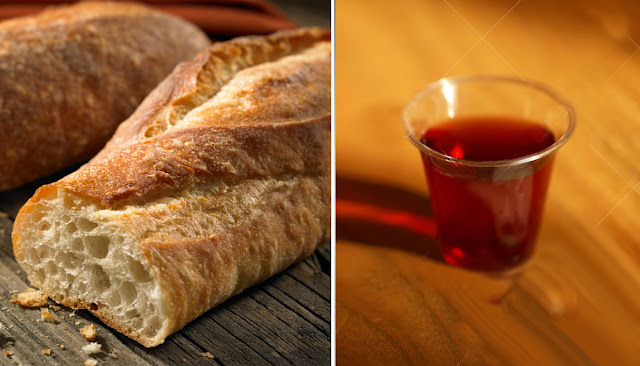 Here is a quick example of what happens when you remove something as simple as the symbolic color red. Below is an illustration of a familiar symbol. However, it is missing just one thing: the color red. Is a stop sign still a stop sign without the color red? Would you know to stop if you saw the below white stop sign on the street corner? Does it have the same effect? So, how about using clear, chlorinated water as the symbol for blood for the sacrament?  Does that have the same effect? 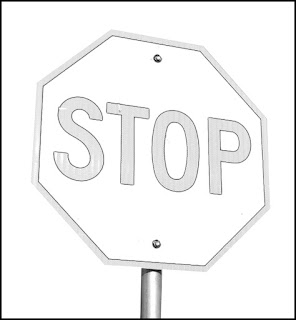 Here are a few important things that we have changed and altered from the Sacrament ordinance:


Everyone should knee out of respect to the Lord and the sacred nature of the ordinance. We read that the elder or priest knelt down along with the congregation to bless the sacrament.


SACRAMENT EMBLEMS:
Wine should be used (alcoholic or not). Scriptures mandate that. The purpose of the wine is to not only symbolized the blood with the color red, but also to reflect the bitterness of the shedding of the blood of the Savior. It is designed to be unpleasant and not necessarily “taste good”.


SACRAMENT PRAYERS:
Exact wording of the Sacrament Prayer either from the chapters 4 and 5 in Moroni or section 20 in the Doctrine and Covenants. Unfortunately we have changed the word wine and we say water instead. (interesting to note: there is a word difference between the two scriptural versions. In the Book of Mormon, Moroni uses the word “hath” and in the D&C it uses the word “has” in the blessing of the bread. See below).

TAKING UPON US AN OATH/SACRED COVENANT:
The Sacrament is a sacred ordinance. Quite literally, the sacrament is like taking an oath. Under oath we promise to “always remember Him.”
In the legal system, you would not be allowed to testify in a courtroom under oath unless you raise your arm to the square. It is a signal that you are being square about this, you are being truthful about this, you are being honest about this. You are holding yourself up to the sharp corners of truth and squareness.
The Lord not only wants us to recite in the Sacrament Prayers our obligations that we are giving, but also recite the Lords' obligation to us... to have his Spirit to be with us. The language of the ordinance is not merely us reciting what we commit to do, but the Lord’s commitment to us.. That is the thing about covenants. He is saying in this ordinance that if we commit to our obligation, He will commit to deliver to us His Spirit.
In fact, raising your arm to the square (either one or both) was used in the Church up until the 1930’s. Like the baptismal prayer, you don’t see an ordinance performed without an arm raised to the square. After World War II it was brought to an end. The priest blessing the sacrament and the congregation are testifying of the same thing. All of them are testifying of this sacred obligation to always remember Him. (Anciently, another reason for extending your hands in the air was to show that your hands were clean.)
SIDENOTE:
I wrote this blog post because I just returned from visiting the new Church History Museum. I was stunned to see in the art exhibit showing the Sacrament representing the Lord's Supper with the 12 apostles. The chair at the head of the table on the right is suppose to represent Christ seat where the large picture of water is. On the table, there are 12 glasses for each of the disciples. The glasses are only filled with water. To compensate for the lack of tthe symbolic red color,  they have used a red tablecloth and seat covering.. Personally when I saw the clear glasses with water it felt empty and lacked the Spirit of what the Lord intended. 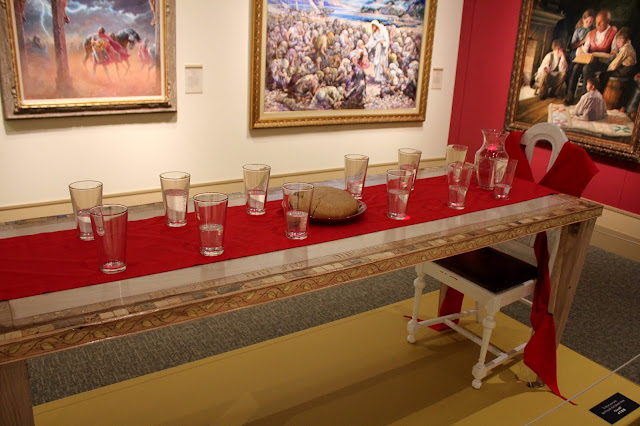 This is what the Sacrament table display would look like if you didn't have the red tablecloth and only had the water to symbolize the blood of Christ. 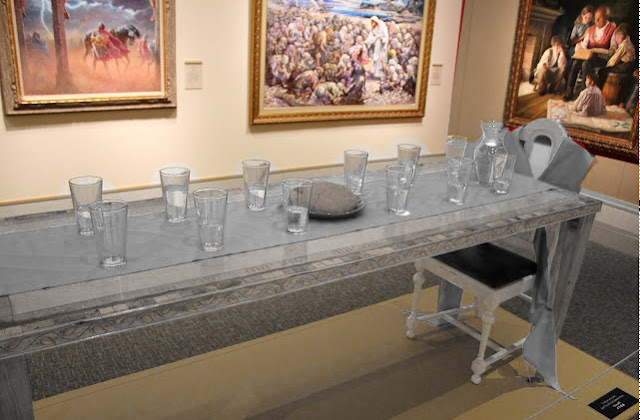 So the question to ask yourself: Have we changed this sacred ordinance? If so, lets repent and return back to what the Lord intended.
Posted by BARE RECORD OF TRUTH at 3:22 PM 35 comments: