A recent letter dated August 23, 2019 was sent to all of the Church Leaders regarding changes and updates to the Handbook of Instructions in both volumes 1 and  2.

Since the Handbook 2 is available to all members on the Church website,  I read some of the new updates. Below is from the Church Policies and Guidelines. If I understand correctly,  under the  section 21.1.34, it sounds like it is still acceptable to call the members Mormons. Also, depending in what country you live in, it is also might be necessary to still call the Church, the Mormon Church. 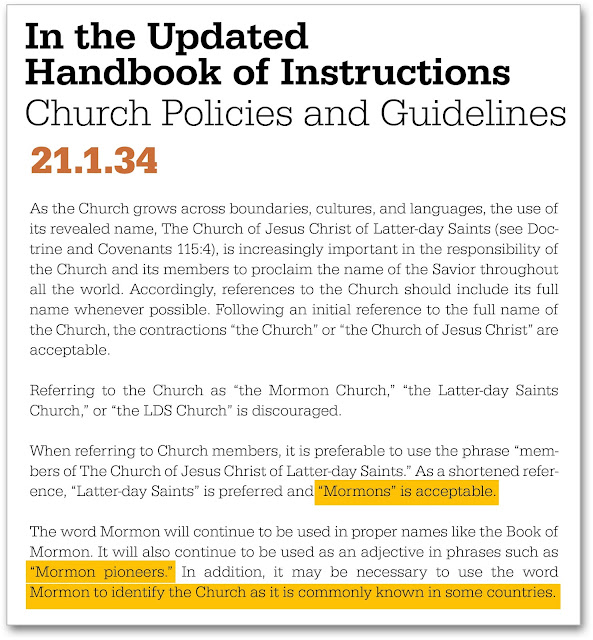 I was under the impression though that using the term Mormon was a victory for Satan. Not just a victory, but a MAJOR victory.

“When the Savior clearly states what the name of his church should be, and even precedes his declaration with, ‘Thus shall my church be called,’ he is serious,” Nelson said. “And if we allow nicknames to be used and adopt or even sponsor those nicknames ourselves, he is offended.”


So, super confused. Because I sure don't want to offend God by using the term Mormon. Some Church Members consider it a 4 letter word  (actually it is 6 letters, but whose counting)  So, I am not sure if this is just a mistake, an oversight, and maybe the Handbook still needs to be updated. Or maybe this is soft back-peddling for us to be able to still use the term 'Mormon'. (a revelatory U-Turn?)


Sidenote:
A few weeks ago we just observed the 24th of July. Maybe the Church Leaders and members found hard if not confusing  to not use the term  'Mormon Pioneers.' It is quite a mouthful to call them 'the members of the Church of Jesus Christ of Latter-day Saint Pioneers', or just 'Latter-day Saint Pioneers' or even 'Saint Pioneers.'  Maybe that is why this policy was changed back. Pluse, this is not the first time a policy/revelation has been reversed.

Due to recent high profile Church leaders who have been accused of sexual misconduct, the Church is now requiring leaders and teachers to take Children and Youth Protection Training. Below is a email that I received from my ward leadership.

"A directive has come out from Church that everyone who is a teacher or leader of youth or children must complete Children and Youth Protection Training. See the following official Church communication. The online training takes about 30 mins. Please take immediate action to comply with this policy." 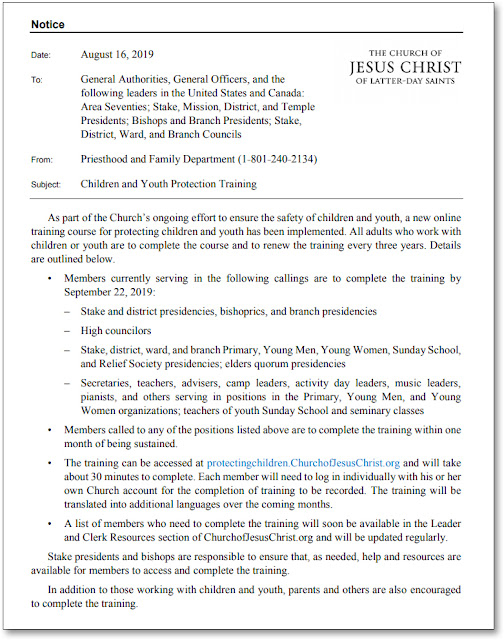 Posted by BARE RECORD OF TRUTH at 3:48 PM No comments:

I know this post might not be politically correct. It also might not be very well received. But that being said I wanted to write about an event that happened 20 years ago this weekend.

But before I do. I wanted to briefly talk about Marriage.If you look up the definition of Marriage in Webster's Dictionary in 1828 you will read the following: 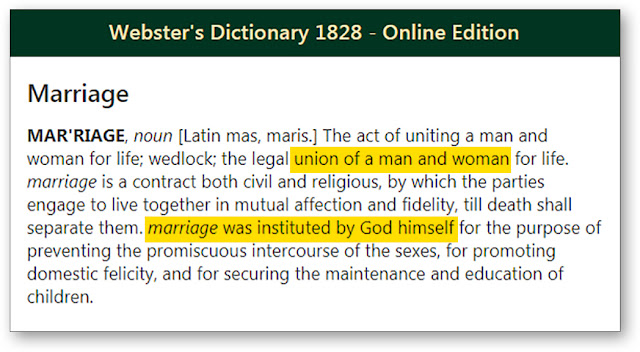 Following the printing of the 1828 dictionary, the definition of marriage has changed dramatically over the years. Two completely opposite deviations of marriage has occurred. On the left, marriage has been refined and now become legal to marry someone of the same sex. To the right is polygamy. Anyone who is a Mormon is should unfortunately be familiar with this type of marriage in which someone marries multiple spouses. (Here is Salt Lake City, Brigham Young married up to 55 women)

Both of these forms of marriages has been and still is very prevalent in the state of Utah.

The reason for the post is not to go into depth about these issues but to remember an event that happened 20 years ago this weekend. Sunday, August 11 marks the 20th anniversary of the EXTREMELY UNUSUAL TORNADO that touched down in Salt Lake City. Most people either have forgotten or are unaware about this event.

There might not be any connection and completely coincidental. But for those who don't know anything about what happened 20 years ago, this might be somewhat interesting. 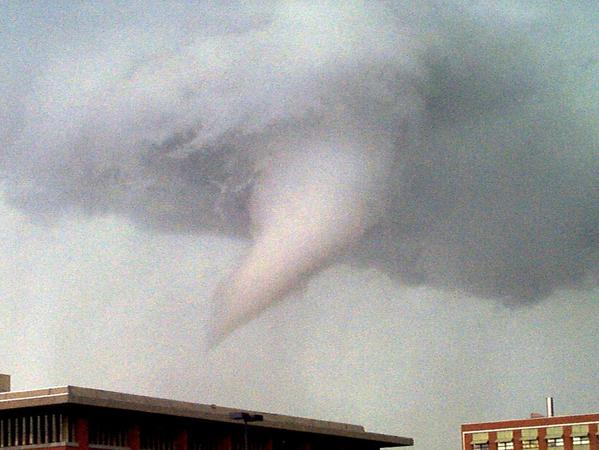 First of all, it is extremely rare for a tornado to touch down in the middle of city let alone Salt Lake City. Twisters strike predominantly along Tornado Alley — a flat stretch of land from west Texas to North Dakota. Tornado typically form over open terrain. They don't descent out of the sky over a large city. The tornado over Salt Lake City was very unusual. It was almost like the tornado had the precision of surgeon with his scalpel which destroyed very symbolic areas of downtown Salt Lake City. One could say it might have been a portent warning. 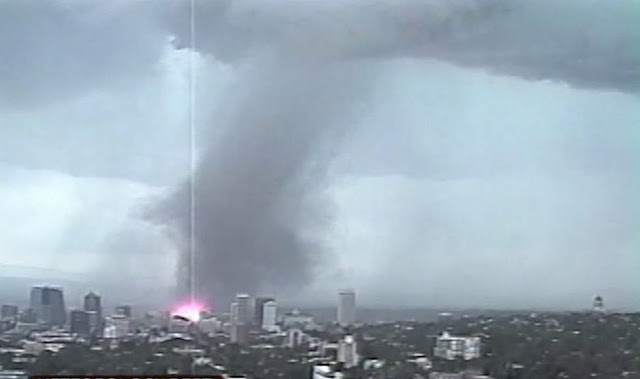 It was reported in the news that on August 11, 1999, a freak tornado ripped through the downtown area of Salt Lake City, killing one person and doing 170 millions of dollars of damage. The tornado touched down on the landmark popular gay dance bar on Salt Lake City's west side. This building was blown apart by a tornado and was the first victim in the tornado's path. The funnel cloud hurled bricks and wood from the Sun's roof, hundreds of yards to the west. The Sun was condemned from destruction by the tornado. 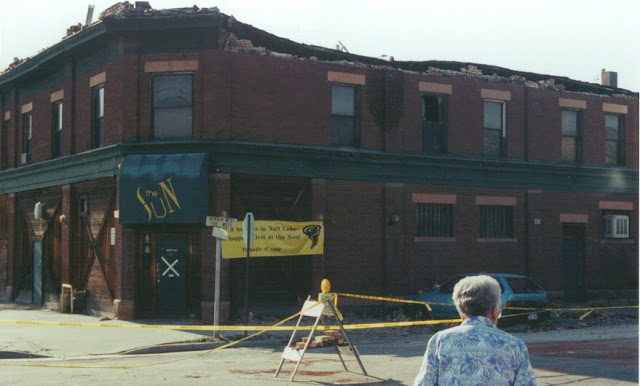 Center was repaired and dedicated a year later in 2000. 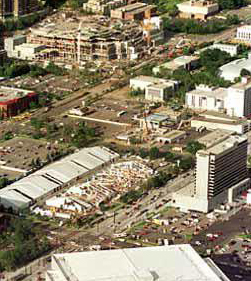 The tornado uprooted and destroyed an iconic tree on Temple Square which was a favorite backdrop for brides' pictures at the Salt Lake Temple. Newly married couples would pose next to this tree after their marriage and sealing in the Temple. It was located on the symbolic southeast corner of the Temple and was nicknamed the "Sweetheart Tree. The tree was a honeysuckle tree, but was gnarled in a manner similar to an olive tree. It is believed to have grown from seeds carried across the plains by the pioneers. 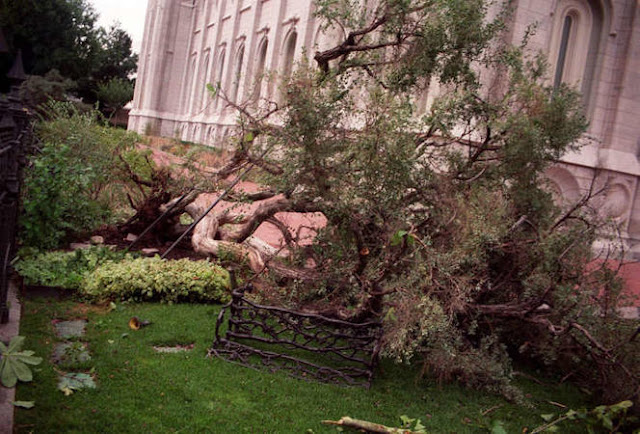 All of the windows in front of the big Christus statue in the North visitor’s center were blown out. Due to the destruction, Temple Square was closed for two days.  One witness said, "We had shards of glass from the visitors center [windows] that were embedded in soil 12 inches," he said. "The doors on the east end of the Tabernacle blew off -- they were gone." 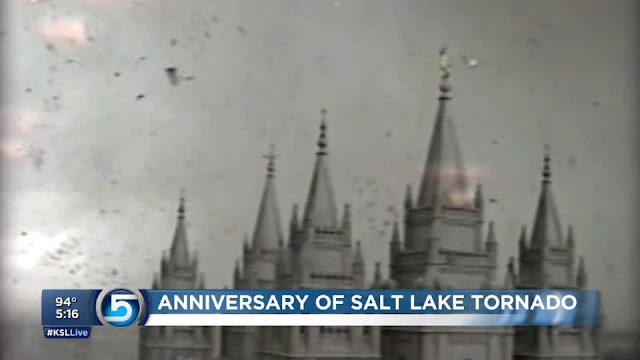 The tornado ended at Memory Grove.. also a very popular path where those who lived an alternative lifestyle would meet up. Nearly all of the trees in Memory Grove, a park at the mouth of City Creek Canyon near downtown, were reportedly torn out, as well as hundreds of old trees on the Capitol grounds.

Coincidence or Symbolic? Portent or Random?  A Sign for what is to come.. or should we ignore and dismiss the interesting facts?

I hope Ralph will forgive me for changing a few of his words and substitute 'sorrow' for 'doubt', 'uncertainty' for 'worry'. I think this meme might help those who find themselves in a state of confusion...which so many are experiencing. 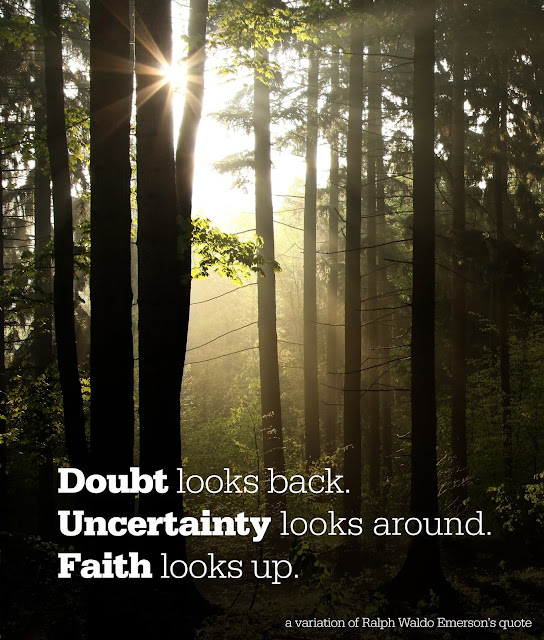 Posted by BARE RECORD OF TRUTH at 10:57 AM No comments:

502: A very personal and sacred choice.

I came across a quote by President Russel M Nelson that I thought was interesting. It is from a talk given in 2004 and can be found here in The Church News.

"While searching for the truth, we must be free to change our mind—even to change our religion—in response to new information and inspiration… One’s religion is not imposed by others. It is not predetermined. It is a very personal and sacred choice, nestled at the very core of human dignity.”
(emphasis added.)

I think it is interesting that one could read the above sentence and get two different meanings out it. Most members of the Church would read his words and say that President Nelson means that if you are not a member you find out about the Church that you would change your current religion and become a Latter-day Saint. Others could read this who have found out new information about the Church and use this as permission to change religions.

Here is a cartoon of two people saying the exact same thing.. but what they are saying have two completely opposite meanings. 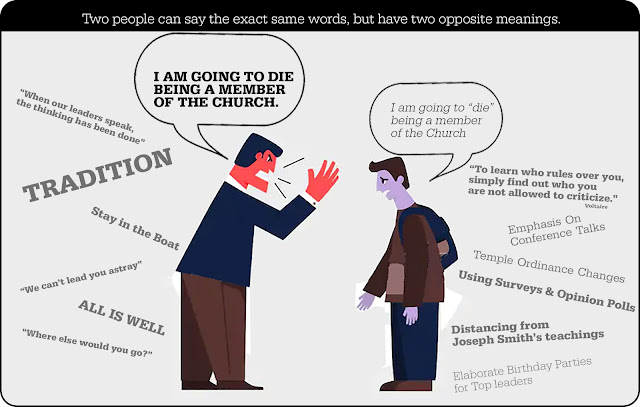 Posted by BARE RECORD OF TRUTH at 3:17 PM