21: MODIFYING OR DELETING PARTS OF THE ORIGINAL 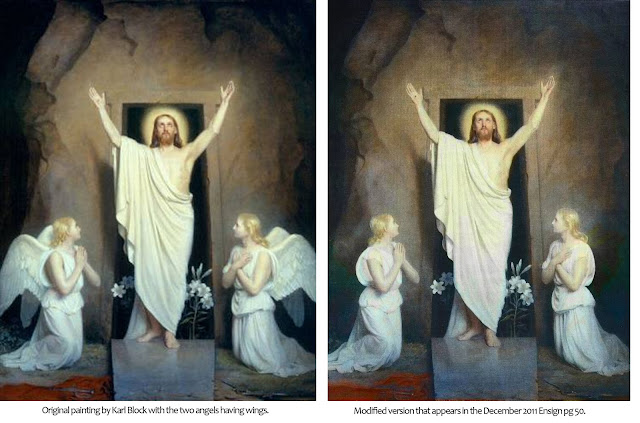 _______________________________________________________________________________
Do we have the right to modify, change, tamper and/or delete parts of a master’s original work?
Most Mormons appreciate the work of the master artist, Carl Bloch. The Museum at Brigham Young University recently showcased many of his paintings in an exclusive exhibit held earlier this year. The Church often uses his paintings in their publications, manuals and as recently as this month’s Ensign (December 2011).
However, there are elements in some of the paintings that we don’t like. Now that this master artist is dead, we have removed those things we are uncomfortable with to fit our taste, preference and doctrines. We can justify the changes since the opinions of the majority prefer the new look.  We tend to pick and choose from what was created before and take out what we might consider in an error to begin with, since we have more truth today. We don’t like wings on our angels.. so we have “professionals” alter the original work of art.
Below left is Carl Bloch’s original painting entitled, The Resurrection. There is beauty in the composition, the symbols used, and the colors. … but we don’t like the two winged angels that are kneeling. So in this month’s Ensign the new version of the painting has the “new and approved” version of the painting with wingless angels.
I wonder how the creator of this masterpiece would feel now after a hundred years later since he finished this painting, that we feel we have the right to change and delete from his original painting.
Obviously, the church felt they had good reason to remove the wings. But I wonder, where does the modifying/changing stop?  If we were in possession of the Ark of the Covenant, would we also remove the wings of the two cherubim? Should we also change the text in scripture, especially in Ezekiel,  when this prophet not only describes personages with two wings but with six?  Wings symbolize “movement forward”, and power. They represent something celestial/heavenly and not earthly. Yet, we feel we need to change things to fit into our present day paradigm of what we think things should look like, even though that was not what the original master and creator intended.  Is this the only example of deletions, changes, altering, or modifying from an original? Have we ever been warned not to change, modify, remove or alter things?  The Prophet Joseph Smith taught, 'Ordinances instituted in the heavens before the foundation of the world, in the priesthood, for the salvation of men, are not to be altered or changed.'… But that is an entirely different post.
Posted by BARE RECORD OF TRUTH at 11:05 AM

Not only did they remove the wings, they also added sleeves. Interesting.

So now even angels are subject to the For the Strength of Youth pamphlet "guidelines?" This is getting ridiculous.

No, the Church should not be able to make ANY modifications to an artist's work without his or her permission.

fortunately for our at times pharisee-like church he's dead and there's a good chance they bought the copyright, so I guess they can do what they want. I like the original better.

I love my church and everything it powerfully edits

Powerful, indeed. Just not in the way you think.

I can see the headlines now "Cap sleeves save woman's virginity."

Are there still virgin women running around? where?

I think most people who create a work of art would be mortified to have someone mutilate it.

oh I agree, God for example is mortified to have someone mutilate his true church

And yet Jesus can flaunt his resurrected shoulder all he wants. Double standard!

Jesus has always been immodest and standardless. He is so gross.

But Jesus is such a lovable, long-haired, unshaven, peaceful dude that we can forgive his hippie ways (at least 70 x 7).

They didn't buy the copyright and they didn't disclose that they had modified it. Along the right side of the page (actually pg 54, not 50), it says "THE RESURRECTION, BY CARL HEINRICH BLOCH; USED BY PERMISSION OF THE NATIONAL HISTORIC MUSEUM AT FREDERIKSBORG IN HILLERØD". See for yourself:
http://media.ldscdn.org/pdf/lds-magazines/ensign-december-2011/2011-12-00-ensign-eng.pdf?download=true

Anyone know if what they did here was legal?

Oh, good heavens. So women's shoulders are evil, and the symbol of wings are evil (which God himself felt comfortable using in vision and on the Ark of the Covenant). What's next?

And, as someone who loves art, and knows just a leetle about it, I personally feel they totally wrecked the composition by photoshopping out the wings. (Completely aside from the principle of the thing . . . )

I just can't get over those sleeves. As if a shoulder was somehow evil. Ugh. Enough with the vilification of women's bodies, already!

I don't know, but I'm tempted to email the museum and ask if they were aware of the changes made . . .