42: Joseph Smith, the American Indians and the Book of Mormon:

Here are some paintings that I think are important. The first photo is of an 1890 oil painting of Joseph Smith preaching to the Indians. The painting was commissioned for the Salt Lake Temple and it hung there for over fifty years. It no longer hangs in the temple. The painting likely depicts the August 12, 1841 visit of Joseph Smith with more than one hundred chiefs and braves of the Sac and Fox Indians and their families. During the meeting in the grove near the Nauvoo temple the Prophet explained the Book of Mormon. He told them of the special religious commitment the Latter-day Saints have to Native Americas. 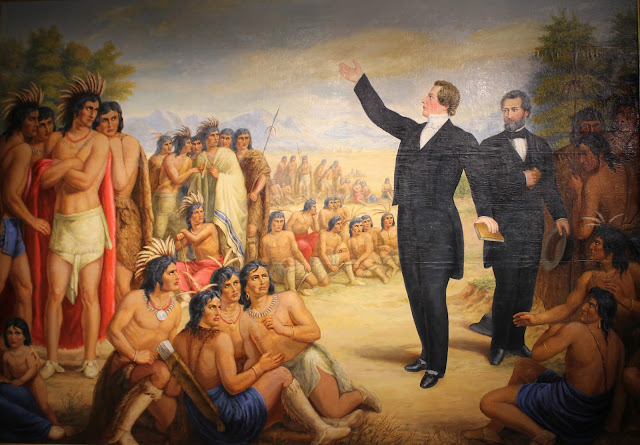 ....................
The next painting depicts Elder Orson Pratt with more Native Americans. It depicts when Orson obtained written permission to stay the winter on the lands of the Otoe and Omaha Indian nations. Hosea Stout recorded that Elder Pratt told them that “our great chief (Joseph Smith) found a book that was about their people. He explained that the Saints were driven and persecuted because they believed in this book. The Indians “listened with breathless silence.” 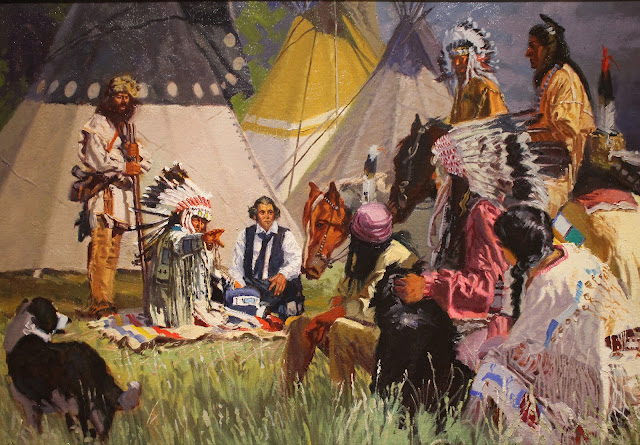 From the introduction to the Book of Mormon we read:
“The book was written by many ancient prophets by the spirit of prophecy and revelation. Their words, written on gold plates, were quoted and abridged by a prophet-historian named Mormon. The record gives an account of two great civilizations. One came from Jerusalem in 600 B.C., and afterward separated into two nations, known as the Nephites and the Lamanites. The other came much earlier when the Lord confounded the tongues at the Tower of Babel. This group is known as the Jaredites. After thousands of years, all were destroyed except the Lamanites, and they are among the ancestors of the American Indians.”
I wonder if we have lost touch with one of the main reasons why the Book of Mormon was written. Mormon states on the Title Page to the Book of Mormon that the purpose of the Book of Mormon is  “is to show unto the remnant of the house of Israel what great things the Lord hath done for their fathers.”
Not sure we have really accomplished this mission to show the remnant (those that are among the ancestors of  American Indians) what great things the Lord hath done for their fathers. Instead it seems like we have put a lot of resources and money into other things.
Isa. 28: 1-3
“Woe to the crown of pride, to the drunkards of Ephraim, whose glorious beauty is a fading flower, which are on the head of the fat valleys of them that are overcome with wine! ..The crown of pride, the drunkards of Ephraim, shall be trodden under feet.”
Posted by BARE RECORD OF TRUTH at 1:31 PM

I agree David.We as a church are about to be trodden under feet. What a shame it has come to this.
Jerry and Karen

It's interesting how kind & respectful Joseph Smith was to the Indians and how even Orson Pratt made sure he had their 'permission' before he stayed on their lands.

While it appears Brigham Young acted & felt just the opposite towards the Indians. It seems he just took the land from the Indians, even by force if he had to, which led to thousands of Indians, men, women & children, being killed so Brigham's followers could have their lands as their own.

It seems Brigham was no better than the other brutal men in America who came west and used force to take over the Indian's lands, even if it mean't killing them to clear their lands of them and have the land for themselves & send the remainder of Indians to horrible reservations.

I am disgusted with what Brigham Young is said to have done to the Indians.

I've been a member for oh....... over 20 years and I have to admit this blog post is one of the first and only times I've even seen this topic even referenced.

Thank you David. How on earth could we as a people have forgotten about this? And instead totally neglected it. Why is it not taught? It's importance for the restoration was huge. Now it's all but forgotten it seems.

Perhaps the Church has tried to move on from the native-American/Israelite connection since DNA mapping has shown that they're not related.

I am Native American and when I was 9 I was baptized in the church. My family was not active much as I grew up but I later became active as a Mother and wife. I told others how connected I felt to the church doctrine and the idea that Christ came to this land and shared his teaching of Heavenly Father. I always knew of the story passed down from generations of Natives that told of a white man on a white horse who came to our people and taught them of the Great Spirit. When the Europeans came, the natives thought it was the white man who had appeared to them before. The missionaries were shocked to see that these "savages" already knew of God and the Son of God. So my testimony for the Book of Mormon grew from that. As I became more active; I became more upset that the church has turned away from how it was once ran with spirit to how it runs now more like a play where everyone says their lines and fights to be the most "worthy". After a lot of soul searching I've decided that the church has made a pathway to heaven lined with judges and guilt.

"Perhaps the Church has tried to move on from the native-American/Israelite connection since DNA mapping has shown that they're not related."

You need to take a look at the above link. There is DNA evidence linking this.

That whole study is a farce. How do they know the pool they drew from has any connection to those spoken of in the Book of Mormon? It would be like taking a random group of people and trying to prove they are or aren't related. Lehi wasn't a Jew, he was of Manasseh. Do we have any known members of Manasseh out there?

The church moved away from locating the Remnant LONG before that study was done. It started with the Rigdonites (really Campbelites 2.0) They came in and usurped the doctrine... transfigured the word of God, you could say. Joseph was looking for the Remnant when he ran into Sidney, and from then on, the whole purpose of the B of M has been altered. We changed our spot in the story from the "Gentiles" to "Israel." Which means that we no longer have a commission to locate the Remnant, because "we are it!" Now we just need to build Zion. But funny how the fruits promised Zion are not the ones we see today. And because that is the case, we figure we can build Zion using Babylon's techniques. Let's just wait and see how that works out.

I'm curious as to in which edition you got these words: "After thousands of years, all were destroyed except the Lamanites, and they are among the ancestors of the American Indians.”

My edition (c1981 - printed 7/2006) says it a little differently: "After thousands of years, all were destroyed except the Lamanites, and they are the principle ancestors of the American Indians.”

I was just wondering which edition was older: mine or yours.

Anonymous, that link was dead.

I'm not so sure I'd trust the infallibility of science/men to tell me whether the Book of Mormon was true or whether Joseph Smith knew what he was talking about when he said the American Indians were the descendants of Lehi. Every so many years, what was certifiable "fact" is proven (or considered proven) false, and a different theory is raised up on the altar as "fact" to be worshiped.

Apologies for the typo-- try this link:

The problem is the people with this Haplogroup X2a DNA marker are not found in burial sites in Meso-America, but found in sites from North America.

One of the reasons is because things were didn't happen as planned and if the true order was known, there would be major issues with the direction the church is going. "lined with judges and guilt" is a defense mechanism to get people to worry stuff other than the real issues and examining the problems with where we are going.

For the first ~80 years, the mission of the church was all about Zion. The way to accomplish it was revealed and taught openly by Joseph, Orson and many others. There were three steps/missions.
1)The Gentiles(Ephraimites) would gather the Lamanites(Manasseh)
2)Then those gathered Lamanites Redeem & build Zion
3)Then missionaries are sent out to gather the lost tribes to Zion

This was the focus, but there was almost no success with the Native Americans. My opinion is because they had the same mentality as most Americans in conforming them to adopt their ways of thinking and acting and that wasn't going to work. Since they couldn't gather the Lamanites, they decided to skip to step two and build Zion. Well they tried and it didn't work. So then they went on to step 3 and started sending missionaries out to the lost tribes. The Natives are forgotten, as Zion is changed and hardly spoken of as a city. This is where we are today. With missionaries across the world among the tribes. It's not working either as the retention in many places (like Chile where I served) is so low because the tribes are to be gathered and without Zion, the gathering place it falls apart.

@Anonymous, a few good posts on the subject and more info that is out there:
http://failmo.blogspot.com/2011/11/we-need-samuel-lamanite.html

Also, George P. Lee, a Native American(son of a medicine man), the last General Authority who was excommunicated. He wrote letters to the first presidency and contended with the leadership about its relationship with the Native Americans.
http://www.lapahie.com/George_Patrick_Lee.cfm

That's cool! It would tip the scales a bit in favor of the idea that Joseph Smith knew what he was talking about when he said the descendants of Lehi were in the United States, in the area he said they were in.

Check out video #29. There are more studies that have been done that show the Eastern American Tribes do have DNA that links back to the middle east.

I am convinced that the Book of Mormon took place around the Great Lakes area right here in the good old USA!

That would fit what Joseph Smith said about them being in the New York area (it's only logical to assume they spread after traveling halfway around the world).

Who is the other white man in the first painting?

Your edition is older. The latest edition (2013) says "they are among," not "they are the principal."