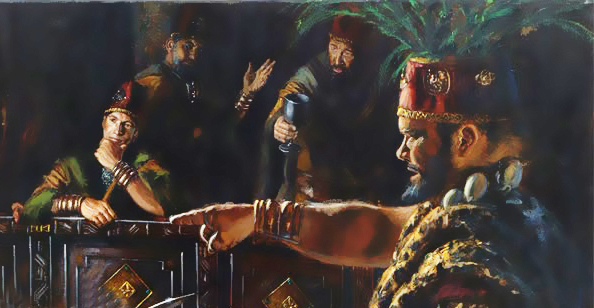 King Noah and His Kingdom, Part 2


“For behold, he did not keep the commandments of God, but he did walk after the desires of his own heart. And he had many wives and concubines. And he did cause his people to commit sin, and do that which was abominable in the sight of the Lord. Yea, and they did commit whoredoms and all manner of wickedness”
Mosiah 11:2.
.

Noah was a polygamist who walked after the desires of his own heart. There have been times when the practice of plural marriage has been authorized by revelation and commandment, and at other times received God’s censure (D&C 132:29, 34-35; Jacob 2:23-24). Noah and his priests weren’t the first, or the only people in history that sought to excuse themselves in committing whoredoms, because of the things which are written about ancient kings (ibid.). His example and teachings caused his people to commit sin, though neither he nor his people believed they were living in sin (Mosiah 12:13-14).

Like the Pharisees’ reaction to the Lord, Noah and his people were surprised “that we should be condemned of God or judged of this man (ibid.). They were surprised that somebody would challenge their righteousness. The wicked priestly class of Christ’s day was surprised at His message of admonition and repentance. In their view, they were the only people actually keeping all of the commandments. To them, even Christ and his disciples transgressed “the tradition of the elders” (Matt. 15:1-3). Christ taught them that it was precisely by way of their tradition that they “transgressed the commandment of God” (ibid.). Their pride had blinded them.

Remember, this story is being told to us in retrospect through the lens of a righteous prophet-writer. It is that prophet-writer who makes it clear to us that Noah and his people were wicked. Prophets have a very different view of history, and of the unfolding current events than do those who belong to or sympathize with Babylon. Because prophets commune with God, they are able to see things as God sees them.

If we were to read a history about Noah and his people written by their own hand it would, of course, be highly complimentary. Conspicuously absent from the record would be any details about human failure and weakness, especially of the king. Their record would tout their accomplishments. It would tell us about what great progress they made in the kingdom by way of building projects, for example. They certainly kept and preserved records. Otherwise, how would Mormon know so much about them.

Since the king and his priests spoke “flattering,” and “lying and vain words” unto the people we shouldn’t expect that their record would reflect a greater degree of honesty (Mosiah 11:7, 11). The ultra-religious always think they’re better than they really are, and they’re happy to talk about it.

The wickedness and abominations of Noah and his priests led them to pride. Their pride led them to boast in their own strength. They believed that it was not possible that they should be brought into captivity, or into bondage. They thought that because they had “prospered in the land,” they would always prosper (Mosiah 12:15). But it was not to be so.
Posted by BARE RECORD OF TRUTH at 8:39 AM

So, in their case, following the current leaders was not such a good idea - and polygamy in their day was not ordained of God. I'm wondering if the old priests were given "emeritus status". Blatantly cutting them off would probably have been social suicide among those who believed they were of God. Giving them a form of honorable retirement would have probably worked better.

Just trying to understand it as though it were in our day, since the book was written for our day.

Howdy folks,
Using some pics and info from your site, I have recently produced a New FREE ebook that I hope everyone will enjoy. Now at: Smashwords.com
‘The Book of Mormon~ Colorfully Illustrated’
This is truly a Wonderful book. This is an -All New- recreation, based on Joseph Smith’s original work. This book was written for Our times Today! Everyone on earth is invited to download this Free ebook.
This book will speak to you from out of the dust of the distant past, with its unique charm, the way it did to my great, great, great grandfather Parley P. Pratt. This book, in simple country boy English story form, unlocked the mind of my grandfather, and the mind of Brigham Young, and hundreds of thousands of others. It Can do it again!
This Free volume has been transcribed painstakingly word for word in exacting detail, as best as humanly possible.
Yes, all of young Joseph’s original words are here, along with an incredible collection of fine art, maps, graphic designs and photos. Plus references and helpful links. This has taken me three and one half months to compile and transcribe, plus another month of picture editing. It has been a tremendous and yet rewarding labor of Love. I hope all people on earth today will enjoy; ‘The Book of Mormon~ Colorfully Illustrated’
*I have also placed a complimentary reference link to your site in the references section in the back of the book.
Compiled by Steve Nelson
Now at: Smashwords.com
*The LDS Church has Not paid me to do this. This book is Free because I don’t believe that Money should be charged for the Word of God.