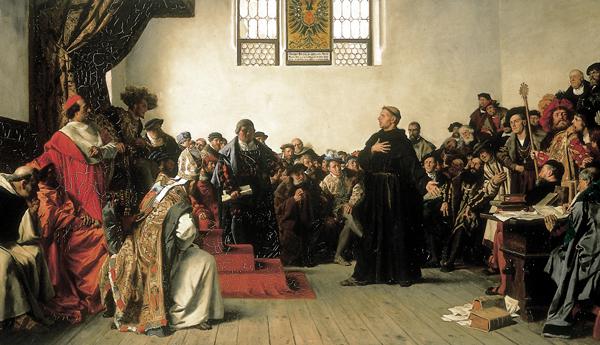 Martin Luther said, “I would never had thought that such a storm would rise Rome over one simple scrap of paper." Luther never intended for his 95 Theses to create the tumult they did. But in Rome, the headquarters of the Catholic Church, they caused outrage and horror, not just because they criticized the pope, but also because they were massively popular.

What Luther had wrote touched people for several reasons. He questioned,  What is salvation? What do people have to do to be saved? And it’s that combination, in a time when people were really resenting the way in which the Church was taking advantage of that desire to be saved, all that came together and made these something that people talked about.

But the Church had a name for people who spoke like this outside the hierarchy. It was heresy and they were apostate. And heresy called for a swift response. The first victims were Luther’s books. And the next would be Luther himself. The ultimate punishment for a heretic was that they could be cut off from the Church.. and handed over to lay justice, which would sentence them to death.. in a rather hypocritical phrase that they used, “without the shedding of blood,” which usually meant burning or drowning.

Only 100 years before, a man named Huss had criticized the Church for much the same reason as Luther. Huss was promised a safe hearing, only to then be roasted alive. The papacy can crush, there’s no two ways about it. It’s an amazingly efficient machine for detecting discontent and "error" through the Inquisition and through the elimination of individuals.

For Martin Luther, the mounting fury of the Church would inspire not doubt and fear, but an extraordinary courage.. that would only grow stronger with every attack he faced.  Luther squared up to the Church with a style of opposition it had never encountered before. He was utterly dismissive of its threats. The pope demanded that Luther disown the 95 Theses. Luther refused. The pope sent a cardinal to interrogate him. Luther was unimpressed. And then Luther was charged with heresy. Luther replied. “I demand they show me absolutely, not respectively, distinctly and not confusedly, certainly and not probably, just what is heretical."

I think the difficulty that Church faced was this: the more it tried to silence Luther, the greater Luther became convinced that he had a vocation which needed to be seen through. Quote: “I desired to believe freely, and to be a slave to the authority of no one, whether council, university, or pope. And I was bound not only to assert the truth, but to defend it with my blood and death.”

In Rome, Luther’s writings were causing mounting fury, Pope Leo X now turned to the mightiest weapon in his arsenal: excommunication. With this, Leo could condemn Luther to an eternity of hell in the next world and make him an outcast in this. To the average Christian, papal excommunication meant that if you died without being reconciled to the Church, you spent eternity in hellish torment.

Luther was discovering that he had a new and powerful weapon on his side. For movements to spread, their ideas need to spread, and for Luther, it was providential that a means of disseminating these ideas had suddenly become available through the printing press. In our own day and age, we’re very award of how much things have been changed by the Internet. What the internet is to our day, printing was to Luther’s day. It meant that ideas could travel. They could not be stopped.

Luther had watched as the printers had spread his 95 Theses across Germany. And he had realized that their presses could offer him a vast new audience. Martin Luther is said to have been the first propagandist, the first person to really exploit this new medium. He perceived that he could gain an audience that was far larger than he could have done without it. Luther penned and  wrote that not just the clergy, but every Christian, had a stake in their church.  Ordinary people, ordinary Christians – not just the priests – , have a God-given role to play in the running of the Church.

It was proposed that Luther should be allowed to argue his case before Charles, the Holy Roman Emperor, himself at his next parliament in the German city of Worms. It was a crucial moment. Luther was given the chance to present his case at one of the most influential gatherings in Europe. Luther states, “I was not trying to gain praise and fame with my writings and little books, for almost everyone I knew condemned my harsh and stinging tone. But I thought that, even if the present age condemned me, maybe the judgment of future generations would be better."

And all the while, Luther’s writings were gathering an ever-larger audience. He wrote very well. In fact, he wrote very wittily. In fact, he wrote very rudely, and many people found themselves fascinated by this man who would use such crude language when arguing with the pope and with the Church. He’s very, very savvy. He’s grown up from a very young age amongst books and writings and bookishness, and he’s terrifically good at instinctively sensing what will work for whom. He is an incredible writer. He uses earthy, ordinary language. He’s just fun to read out loud. He’s sarcastic, he’s witty, he’s profound. He is a great comforter. If you get attacked by Luther, you’re just torn up one side and down the other. Printed along with Luther’s texts, for those who could not read were visual parallels.

Luther now braces himself for one final showdown with the powers of the Holy Roman Empire at the final counsel. Luther’s appearance before the powerful elite would stand as the pinnacle of this life.

He was shown a pile of his books and asked if they were all his. Indeed, all the books are mine, and I have written more, if you want to read them. He would refuse to recant in terms both clear and simple. I do not accept the authority of popes and councils, for they have all contradicted each other. My conscience is captive only to the Word of God. I cannot and will not recant anything. For to go against my conscience is neither right nor safe. Luther tells us that Luther closed his address with one of history’s greatest declarations of exhausted defiance. Here I stand. I can do no other. God help me. Amen.

Luther’s statement really marks the dawn of a new era, the era of the ordinary person standing up against authority. I am sorry but this is what I believe, My conscious tells me this. I cannot do anything else. That I think, is a defining moment.

These were the first steps of what would be called the Reformation. Luther simply taught, preached and wrote God’s word. He told others that they should be concerning themselves only with their souls and God.

It is an excellent documentary. I just watched it, actually twice. The second time I got my wife to watch it with me. I found it very pertinent to what many are seeing today, including myself.

Just as I'd choose Lutheranism over Catholicism, I'll choose Snuffer over the COB!!!! I hope Snuffer starts a new movement!!! God knows we need it!!!!!!

Anon @ 4:44 -
We don't need another "movement." History shows us that rousing the people just creates another organization that will eventually be taken over and used to enslave again. Look at what happened with Luther.

What is needed is you moving to Christ, so that He can show you the nature of Heaven and the Gods. It is not a leader. It is impossible for anyone else to show you that.

It will be interesting to see what the modern day King Noah and his court do with our generation's Abinadi.
Wishing earnestly I could obtain a transcript of the "trial". Hoping and praying he will not be burned at '"the Stake".
Prayers and best wishes to the accused, his family, and those who will be in the difficult postion of judging the matter. May the Spirit of the Lord enlighten all involved! May courage prevail over fear.
Best wishes Brother Snuffer! Regardless of the outcome today, you will remain our esteemed brother!
JR

Well, Snuffer has brought to light things that no other man has. He must be a Teacher, in the least. We've heard "come to Christ" for 2000 years and where's that gotten us?

We've heard "come unto Christ through us. Big difference, especially if you read Jacob 4:6

Wherefore, we search the prophets, and we have many revelations and the spirit of prophecy; and having all these witnesses we obtain a hope, and our faith becometh unshaken, insomuch that we truly can command in the name of Jesus and the very trees obey us, or the mountains, or the waves of the sea.

The Lord employs no servant at the gate. That's what Denver has taught us. The "movement" that will happen will be spontaneous and directed by Him, not a man. You could call it a marvelous work and a wonder.

While I don't believe or agree with alot that Denver S. claims or teaches, I do think it was wonderful & wise that he left and apparently didn't subject himself to the mockery of a false trial against him by false leaders who are the real apostates.

I hope Denver can one day come to see that the LDS Church holds no true authority from God, for they are completely apostate, in power, word & deed since Joseph died, nor do they have any right or power to curtail or even bestow blessings from God as they pretend.

As Martin Luther found out, we also need to come to realize that the Church is requiring money to get a false piece of paper to enter a false temple for false endowments & sealings that don't even exist nor are necessary. I believe it was all made up by false prophets like Brigham Young to cover for his whoredoms.

For it is God's eternal law that all 1st marriages & families are eternal, whether the individuals were righteous or religious or not. Family members may not all end up in the same kingdoms, but they will always be an eternal 'family' and able to visit, love and care for one another for eternity like they do here on earth.

The Church would have us believe that we must earn or pay for the right to have & be an eternal family, which God already gives to everyone freely for being willing to come to earth.