Below is a painting entitled "View of Scheveningen Sands." by the 17th century Dutch master Hendrick van Anthonissen. For the past several months, this masterpiece has been under restoration at a museum at Cambridge University. For centuries, art historians have wondered why there are clusters of people gathered on the beach and on the nearby cliffs in obviously unpleasant winter weather looking at nothing. 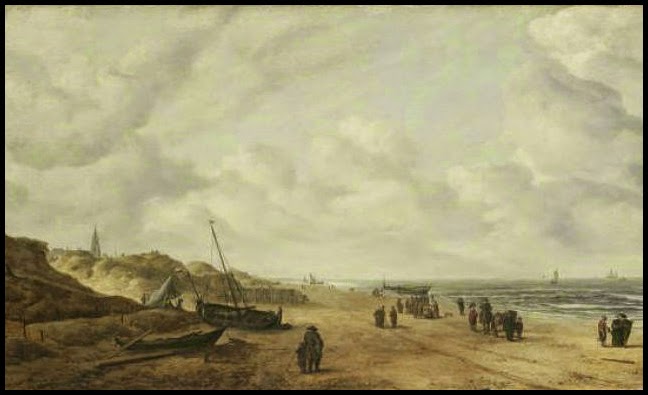 It wasn't until the painting under went a restoration that there was something missing from the painting. The true subject of painting slowly emerged after the varnish and heavily daubed overpaint was painstakingly scraped away. The process took months. Not only were the original brilliant colors restored, but the central figure of the painting was uncovered. Of all things.. the discovery was a beached whale. It had been painted over years later by others who thought that the whale was a distraction and an eyesore. Yet to the original painter, it was the main focal point.

Here is the "restored" painting with the whale uncovered. To read more about this recent discovery , here is the link to the news article: ( LINK ) 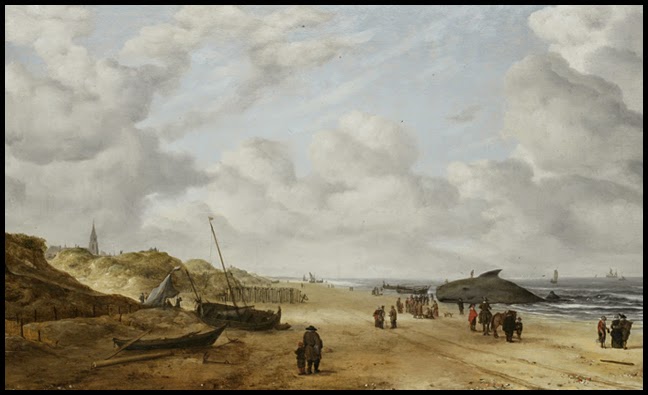 I use this story about this painting to illustrate the difference between three R words
Restoration, Reformation and Remodeling.


As members of the Church of Jesus Christ we believe in a restoration of the Church. Yet over time it seems like we have reformed the ancient religion that Joseph tried to restore. Recently it seems that their is a remodeling taking place.


In my opinion there seems to be huge gulf today between what Joseph Smith revealed and the religion that we practice today. Like this painting that covered over the whale, we have discarded, changed, modified, added to, abandoned, ignored, and forgotten much of the original religion of the Restoration. But as we all know, history repeats itself.   I recently read a commentary on specific verses from the Book of Mormon (18 of them to be exact) that included the following observation.

"As the New Testament unfolds, we find just how entirely possible it was to be devoted to the religion, and yet so unenlightened to the truth that people would reject God. This gulf between religious people and their God highlighted Christ’s ministry. Christ’s teachings attempted to bring people back to God by focusing on what was truly important.

Christ came to end the Mosaic Dispensation and begin new forms of worship. The religious leaders of His day were so steeped in their form of religious observances they viewed Christ as a threat to the order of things. These were not irreligious people. Quite the opposite was true. They were devoted to the faith they practiced. It was their security, their tradition, their identity. Through it, their place in the world was established. The entire Roman Empire knew of the Jews. Their religious peculiarities were well known. Their synagogues were spread from Jerusalem to Antioch, from Alexandria to Rome. Paul’s later missionary efforts would use the local synagogues throughout the Mediterranean as places to preach. The Jewish faith was the seedbed from which Christianity sprouted. The leaders of this faith were justifiably proud of their religion’s successes. However, whatever light may have been possible to gain under this religion, the leaders were so opposed to Christ they conspired to have Him killed. The religion established through a prophet of God became the superstructure used to kill the Lord who first revealed it to Moses. As these devoted followers of Moses’ law were killing Christ, they were satisfied their judgment was more than justified by their religion. Religion and the religious were the ones who opposed the Lord. The sinners and irreligious were His followers.

At the time of Christ, the Jews were completely devoted to their religion, and yet so unenlightened to the truth that they rejected Christ. There was a gulf between religious people and what they perceived as truth. Christ’s teachings attempted to bring people back to God by focusing on what was truly important. However, the Pharisees and other religious leaders of His day were so steeped in their form of religious observances they viewed Christ as apostate and a threat to their power and authority. These Jewish people were devoted to the faith they practiced. It was their security, their tradition, their identity. Through it, their place in the world was established. The leaders of this faith were justifiably proud of their religion’s successes. Religion and the religious were the ones who opposed the Lord."

"All religions are prone to drift from what matters most to what matters not at all. Particularly in a hierarchical church, there are always those who confuse the expediency of having a hierarchy with the truths which save. Attention is distracted away from God and enlightenment and onto the hierarchy. God, knowing this great weakness of mankind has caused the slide into darkness among His people in all prior dispensations, warned in revelation about this very issue. He revealed: “Hence many are called, but few are chosen. No power or influence can or ought to be maintained by virtue of the priesthood, only by persuasion, by long-suffering, by gentleness and meekness, and by love unfeigned; By kindness, and pure knowledge, which shall greatly enlarge the soul without hypocrisy, and without guile—” (D&C 121: 40–42.) Salvation does not come through a hierarchy. It never has. It never will. Salvation comes as individuals are brought to have their hearts changed so they sing with joy the songs of redeeming love. People may help bring others to sing this song. And an enlightened hierarchy may lead others along that path. But it is up to each person to individually choose to have their hearts change. However good or bad leaders or others may be is irrelevant to individual salvation. In any church with an orderly hierarchy, there are those who have sought for a position of authority to prove to themselves they are accepted by God. More often than not they have been dismayed, when their ambition is realized, to find they’ve accomplished nothing. God is just as distant from them as He was before. He is not found in popular acclaim or public recognition. His is the still, small voice which is available to the obscure and the meek. Generally speaking, leadership interferes with, and does not promote, contact with the Holy Spirit."
................

Sidenote:  I was sent a recent email that I also wanted to share.


“We have forgotten that it is either all about Him or not at all about Him. We've sought to make Jesus a mere "feature" and not the driving force of our lives. We've remade God and the Gospel into a simple means to selfish ends -- our own wealth and pleasure. Too many have made prayer something we do when we're in trouble, or when we're buying lottery tickets. Fellow Christians are suffering and dying around the world and we fill our minds and mouths with the latest news about people we don't even know.

The modern church is miles wide and inches deep. We try to convince the world that they should accept us because we are like them, not because we have the Answer or because we stand for something greater.”  LINK

Posted by BARE RECORD OF TRUTH at 5:55 PM

An amazing post. Probably in my top five. How long will the good people who call themselves Mormons slumber? What exactly will it take to remove the scales from their eyes so that they may see aright? How much longer can a just God restrain the reapers? Helaman 13 comes to mind.

A new mission president's training conference was held about a year ago, followed six months later by a round table discussion among church leaders sponsored by the Church News. During the round table, participants shared their thoughts on the effect that recent changes in youth sunday school curriculum, missionary ages, and family history work were having on the "hastening the work" front. One of the round table participants, Elder Allan F. Packer of the First Quorum of the Seventy, made this revealing statement: "We are shaping the future of what the Church will be, of what people will be, of what families will be" (see: https://www.lds.org/church/news/print/the-work-of-salvation-needs-every-members-help?). I know the article is not the text of a general conference talk, but it's interesting that among the many statements selected from these meetings (presumably the most important quotes), there is not one mention of the name Jesus Christ, or the Book of Mormon, or faith, or repentance, or really anything substantive to our salvation. Because they are not totally scripted, these sorts of spontaneous quotes are more revealing of what is in the heart. There is truly a remodeling going on, a shaping, for the church leaders themselves now admit this openly and it goes unchallenged. 2 Ne 28: 11-12 "Yea, they have all gone out of the way; they have become corrupted. Because of pride, and because of false teachers, and false doctrine, their churches have become corrupted, and their churches are lifted up; because of pride they are puffed up."

Beautiful summary of what will play out in our day.

I have found that organized religion, that relies on the arm of flesh, and puts off of the Holy Spirit, does more to harden the hearts against God than any thing else. It was a very religious people that wanted Jesus killed. Most of those that killed the prophets, or wanted them killed in the BofM were religious people. Their high priests and judges were always the foremost against the prophets.

I'm sure these examples in the BofM were included as types for our day. We will see the same.