There are few things that have to be 100% perfect in the Church. For example, TOTAL immersion at baptism and I don't mean just the person. If any part of the clothing floats to the surface, the baptism needs to be redone. The wording of the Sacrament Prayers can not be said with any error. Last Sunday, one of the 15 year olds in our ward (who is now ordained a priest) had to repeat the blessing of the bread because he said the word 'it' after the word 'eat'.

Now add to that list the correct name of the Church. Here is the directive from Russell M. Nelson, in his conference address that he gave last year. (emphasis added)


"Thus, the name of the Church is not negotiable. When the Savior clearly states what the name of His Church should be and even precedes His declaration with, “Thus shall my church be called,” He is serious."

I find it fascinating that if you look at the Joseph Papers, you can see the original revelation given to Joseph Smith on April 26, 1838 on what the Church should be called.  The correct name and spelling of the Church is:

the Church of Jesus Christ of Latter Day Saints

Does something look different? Notice the lower case 't' for the word 'the' and the upper case 'D' in Day and no hyphen. If the Savior clearly states what the name of His Church should be and Joseph Smith wrote it down, why have we altered the spelling of that name?

Here is a screenshot from the Joseph Smith Papers. 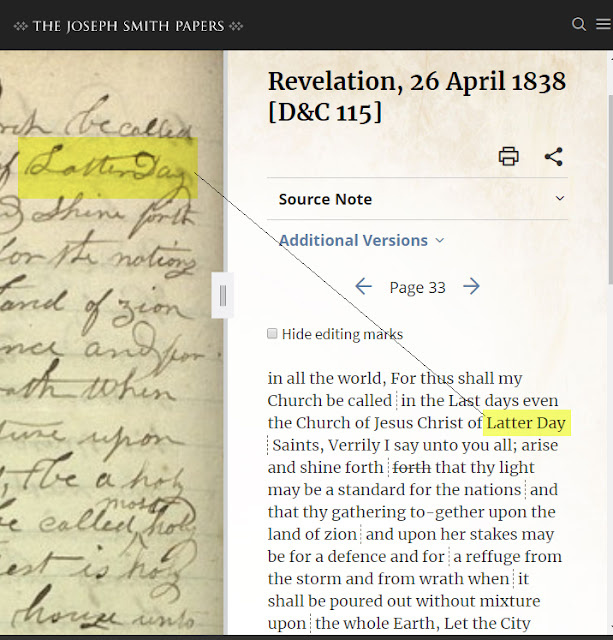 So was there another revelation to change the spelling?  (Fact is that the name of the Church has changed multiple times... (See THIS BLOG, for more research and a huge hat tip for bringing all of this to my attention:)

I am not aware of any such revelation. But I assume the reason to change the spelling was due to a schism after Joseph Smith died. After Smith was murdered in 1844 with no clear successor, several claimants sought to take leadership of the LDS Church. Among them was William Strang, who competed with other prominent members, notably Brigham Young and Sidney Rigdon. Strang continued using the official name of the Church for their congregations. This church is a separate organization from The Church of Jesus Christ of Latter-day Saints, which is considerably larger and better known, although both churches claim to be the original organization established by Joseph Smith, on April 6, 1830. The Strangite church is headquartered in Voree, Wisconsin, just outside Burlington, and accepts the claims of James Strang as successor to Smith.

After moving here to Utah, Brigham Young changed the spelling of the Church's name to include the hyphen and the lower-case "d". It wasn't until incorporation in 1851 by the legislature of the State of Deseret that the church standardized the spelling of its name became official.

Then in 1876, the LDS Church issued a new edition of the D&C which contained the capitalization and hyphenation of the church's name. A change from the 1838 revelation and the 1844 edition of D&C which did not have the hyphen spelling.

So when we read the Doctrine and Covenants today and President Nelson emphatically states we need to make sure that we only use the correct name of the Church we think assume it is to be written like this:

but according to the revelation and what Joseph Smith penned.. it should be written like this:

However, with all that said, the most important thing according to the Lord is not the name but if it is built upon His Gospel. We read in 3 Nephi 27: 8

"but if it be called in my name
then it is my church, if it so be that they are built upon my gospel."

Sidenote: The last part of verse in 3 Nephi 27: 8 was omitted from President Nelson's talk. The qualifier "if" clause which says "if it so be that they are built upon my gospel"  was not said. From the The Correct Name of the Church  talk says:


deleted are the 11 words.. "if it so be that they are built upon my gospel."

SIDENOTE:
While we are on the subject of Church names. It might be of interest that the official legal name of the church is actually:The Corporation of the President of the Church of Jesus Christ of Latter-day Saints.  Here are a few past blog posts on that subject:

What is more offensive to God?
Happy Birthday to The Corporation of the President