A few weeks ago I participated in a discussion with a group of millennials on the Stages of Faith. Below are a few of the Powerpoint slides that were shown as part of the lesson. I few people have asked for them so I thought maybe others would find some value as well. 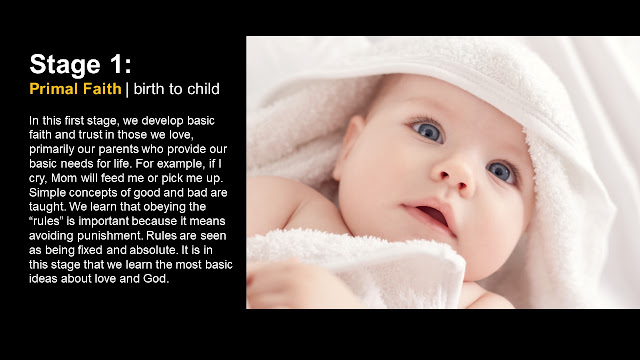 Stage 1: In this first stage, we develop basic faith and trust in those we love, primarily our parents who provide our basic needs for life. For example, if I cry, Mom will feed me or pick me up. Simple concepts of good and bad are taught. We learn that obeying the “rules” is important because it means avoiding punishment. Rules are seen as being fixed and absolute. It is in this stage that we learn the most basic ideas about love and God. 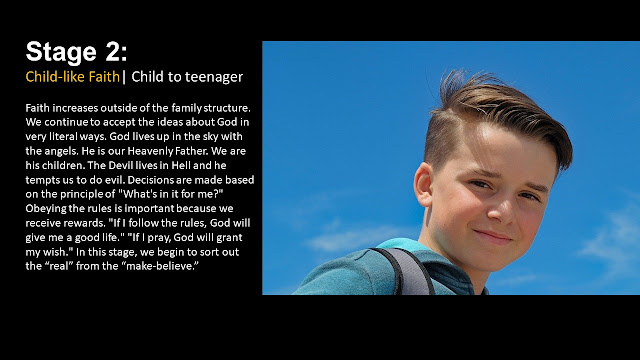 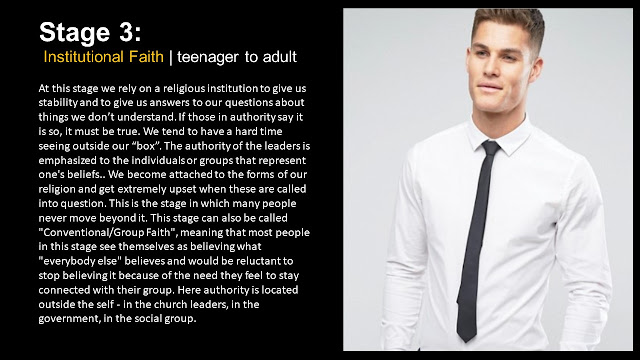 Stage 3: At this stage we rely on a religious institution to give us stability and to give us answers to our questions about things we don’t understand. If those in authority say it is so, it must be true. We tend to have a hard time seeing outside our “box”. The authority of the leaders is emphasized to the individuals or groups that represent one's beliefs.. We become attached to the forms of our religion and get extremely upset when these are called into question. This is the stage in which many people never move beyond it. This stage can also be called "Conventional/Group Faith", meaning that most people in this stage see themselves as believing what "everybody else" believes and would be reluctant to stop believing it because of the need they feel to stay connected with their group. Here authority is located outside the self - in the church leaders, in the government, in the social group. In this stage, the church is like a wise and protective parent; we trust it implicitly.

Most of the people in traditional churches are at this stage. Religious institutions "work best" if the majority of their congregation is in Stage 3 and the institutions discourage people from questioning since it threatens the viability of the institution if people start questioning!) When a person cognitively realizes that there are contradictions between some of his authority sources and is ready to actually reflect realistically on them, he begins to be ready to move to the Fourth Stage. 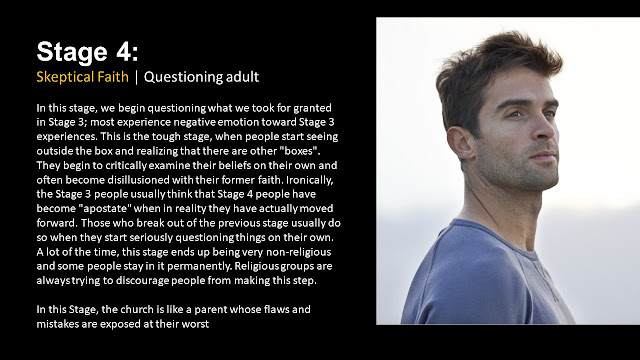 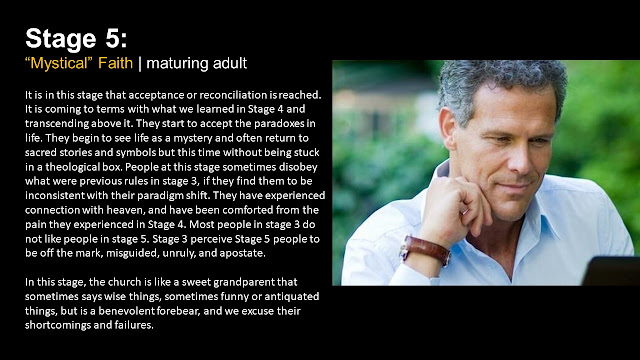 Stage 5: It is in this stage that acceptance or reconciliation is reached. It is coming to terms with what we learned in Stage 4 and transcending above it. They start to accept the paradoxes in life. They begin to see life as a mystery and often return to sacred stories and symbols but this time without being stuck in a theological box. People at this stage sometimes disobey what were previous rules in stage 3, if they find them to be inconsistent with their paradigm shift. They have experienced connection with heaven, and have been comforted from the pain they experienced in Stage 4. Most people in stage 3 do not like people in stage 5. Stage 3 perceive Stage 5 people to be off the mark, misguided, unruly, and apostate. 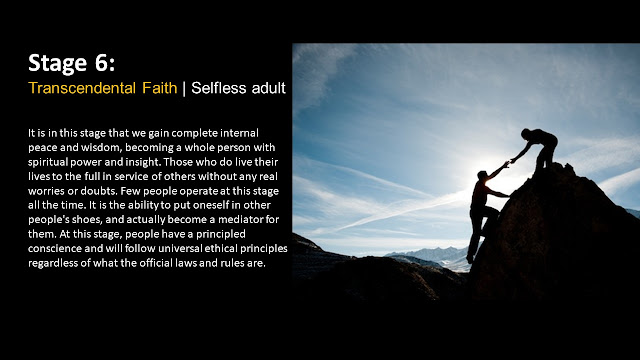 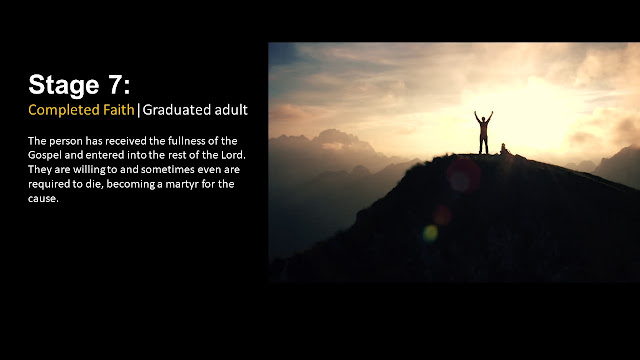 Stage 7: The person has received the fullness of the Gospel and entered into the rest of the Lord. They are willing to and sometimes even are required to die, becoming a martyr for the cause.gardless of what the official laws and rules are.

I think this is a great illustration of Stages 3-4.
Stage 3 is a safe place on clinging onto an organization
Stage 4  is the act to faith to reach out to grab a hold of the Lord's hand in Stage 5. 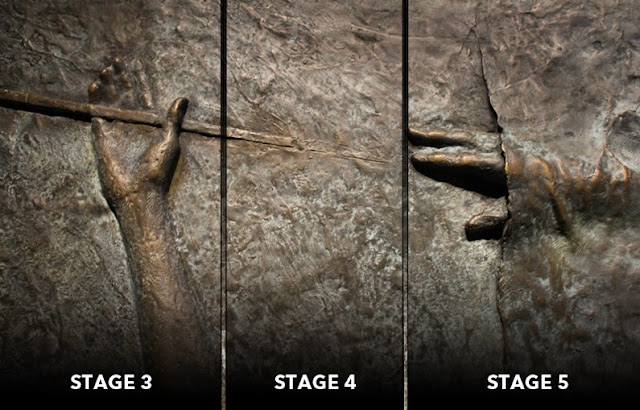 Posted by BARE RECORD OF TRUTH at 4:40 PM

Beautiful. Spot on. Eloquent. Thank you.

This is beautiful. I only recognize stages 1-4. I feel like I've been stuck in 4 for a long time, though I've long ago gotten over the hard part of it. Really hope I don't just become one of those that stays there forever.

I wrote Passing the Heavenly Gift to help people in Stage 4 to move along into Stage 5 and perhaps further. But the institution's Stage 3 paradigm viewed that book with such hostility and fear that they attempted to suppress it, then kicked me out to stigmatize the book so it would not be welcomed by their Stage 3 loyalists.
I've thought it quite an irony that if the institution had welcomed the book, and invited those for whom it was written to read it, they would have retained thousands of members who have instead departed. Many of them departed into faithlessness. Stage 4 is not merely a threat to the institution, but a personal crisis that can and often does end in a complete mistrust of religion. It is avoidable, can be overcome, and can lead to much greater things. But it is true that institutional worship will end through awakening to see a more clear view of things as they were, as they are, and how they appear to be going in the future.
I've reflected on the jealousy that impels the institution to be willing to sacrifice a person's faith in God in order to insist on fidelity first and foremost to the institution. It saddens me to think of that unnecessary trade-off.
Christ was generous and kindly, forgiving and merciful, forthright and candid, and above all filled with light. He held a very realistic view of the status of the religious leaders of His day. But that did not deprive Him of anything. Nor did it prevent Him from rising above while still participating and helping others, including leaders willing to speak directly with Him like Nicodemus.