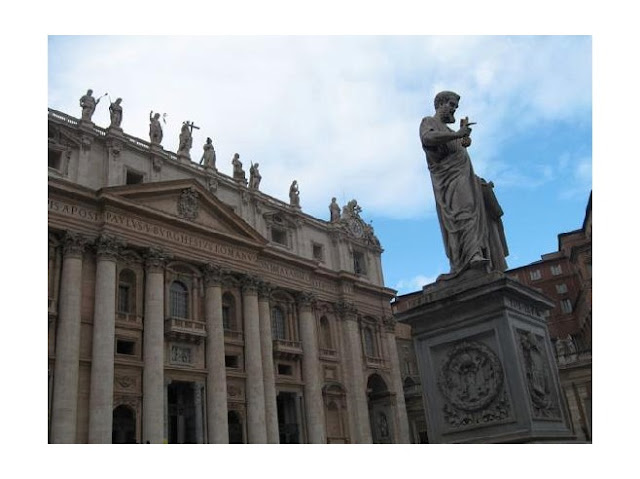 The LDS Public Affairs has recently released the following 6 minute video of the construction of the new Rome, Italy Temple. The video describes the one very unique features that will be part of the Rome Temple Grounds, marble statues of Jesus Christ and all of the Twelve Apostles. These same exact statues are found in the Church of Our Lady, in Denmark. Probably the most famous and well known statues of the 12 apostles and Jesus Christ adorn the Vatican in Rome. I find it interesting that we also want to adorn the Rome Temple with similar marble statues as well. If you watch the video though, maybe we have found a loophole to the 2nd commandment, since it won’t be "us", but instead it will be computer technology that will be doing most of the “graving” of the statues from the images found in the National Church in Copenhagen.
Posted by BARE RECORD OF TRUTH at 2:00 PM

I don't know what to think; I haven't really thought of this before--

sort of in the back of my mind, perhaps--

same person as above--

Most seem very focused on the general authorities, and when I bring up Jesus Christ they get quiet and act awkwardly around me--

as though I've committed a social error--

I don't understand this. We no longer relate on politics or on the gospel, it would appear.

I am afraid, to be honest, to speak to many of them about my testimony, but it is based almost entirely on Jesus Christ. I used to be more church-centered, but events and life changes have made me focus more on Jesus Christ.

Anyone else feeling 'out of the loop' socially as a result of becoming more concerned with Jesus and less with the 'order' of 'things'?

The Christus statue in the visitors center on Temple Square has always, well let's just say it, given me the creeps. It's big and weird, if you ask me. I don't dare say that outloud at church or around any fellow LDSs - they would gasp and think I'm a blasphemer or something. Plus the people are having these "spiritual" experiences when they look at it... babies are running up saying, "Jesus!" (and you know they know) ... I just don't like it and never have. Maybe it was that stint in Catholic school...

I agree with your thoughts and feelings. Maybe someday we will all meet.

I just had this conversation with my spouse about feeling out of the loop in my own ward. It is lonely and a little discouraging. Hopefully comments like these will help you feel not so unconnected

Wow! You are so right! Something about this story/video bugged me, and now I know why. We are simple people -- what happened to us? Now we are trying to compete with the Catholic church, in their headquarters? Visitors should instead see the very apparent difference between the churches because we don't worship idols?? And the money -- those 12 Apostles would probably prefer if we fed childdren instead. Thanks for pointing this out. And I received a witness re: it as well.