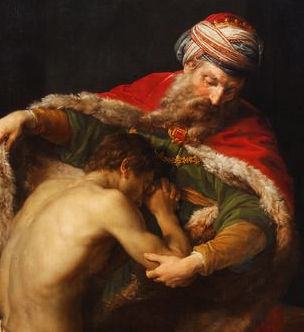 In 1993 article in the Deseret News entitled, "God's grace is our hope, in humility we find Him." comes the following quote given by Carol Cornwall Madsen, "I believe we can learn something about this free gift (of grace) from the parable of the Prodigal Son. Our attention and empathy frequently focus on the older brother, the faithful one who stayed at his father’s side but received no celebration, and felt the injustice of it all. Perhaps we even tend to identify with him as we seek to live good lives ourselves. But who of us can claim to be the older? Who of us has not left the Father’s presence to tarry a while in a sin-filled world, succumbing to our own weaknesses but yearning to return one day to our Father’s house, even as a servant? The parable is a reminder to us of the limitless reach of God’s grace, and God’s grace is our hope. God knows we are weak. He gave us our weaknesses (Ether 12:27). And he know that most of us will demonstrate our weaknesses many times over before we leave this life. This is the risk of agency. But as He so wisely knew, it is through our weakness that we discover humility, and it is through humility that we find God. We are probably never more humble than when we reach the point of acknowledging our weaknesses in that process we call repentance."

A few weeks ago, a friend of mine gave a sacrament talk and spoke on this parable of the prodigal son. With permission, I share some of the thoughts from the talk. To review the parable for a minute, a prodigal's father had two sons. The younger son demanded his inheritance while his father still lived. The request itself is a form of mutiny. The prodigal, driven by a self-centered pride, is impatient for his father to die, and rather than wait, as custom dictates, he demanded his inheritance immediately, feeling that he had a right to it. In doing so, a his relationship with his Father is broken. However, the Father yielded to the demand of the younger son who then promptly took himself and his father’s money to a far off land where he wasted it all on riotous living.

A famine came into the land and the rebellious son who was now penniless, became a lowly servant feeding swine. Which to a Jewish man would be the lowest of stations considering the Jews believe them to be unclean animals and Jewish custom dictates they are not even to be touched, ever. So to feed them would be an abhorrent act for him.

He eventually hit rock bottom, and awoke to his awful situation, came to himself and determined to go back to his father and beg to be his father’s servant.

As the prodigal returned to the village he expected his father to remain aloof in the house while he made his way through the village. To say the least, it would be a long shameful walk through the crowds in the street who would definitely be aware of the Son’s shameful choices and actions toward his father and his entire clan. Upon discovering his identity and remembering that he had lost all his father’s money among the gentiles, Jewish custom of the first century would demand a Kezazah ceremony to be enacted.

First century Jewish custom dictated that if a Jewish boy lost the family inheritance among the Gentiles and dared to return home, the community would break a large pot in front of him and cry out “So and so is cut off from his people”. In fact that is the meaning of the word, “Kezazah”… “the cutting off”. After it was performed, the community would have nothing to do with the wayward person.
So, after enduring this most public humiliation the son would then be obliged to sit for some time outside the gate of the family home before being allowed to even see his father. Finally he would be summoned. With the boy already rejected by the village, the father would be very angry, and the boy would be obliged to apologize for everything as he pleaded for job training in the next village.

That is what custom dictated. That is what justice demanded. And yet, the beauty of this parable (and the whole point of it) is that is not what happened at all!

The father reacts in the most stunning countercultural manner imaginable! He breaks ALL the rules of patriarchy as he RUNS down the road to reconcile his son to himself.

A deeper look at the most correct translation reveals that he doesn’t simply run, the actual word Luke uses is “RACE”. Thus we can translate the phrase, “His father saw him and had compassion and RACED to his son.”

In the Middle East a man of his age and position always walks in a slow, dignified fashion. It is safe to assume that he has not run anywhere for any purpose for forty years. No villager over the age of 25 RUNS anywhere. But now the father RACES down the road. To do so, he must take the front edge of his robes in his hand like a teenager. When he does this, his legs show in what is considered a humiliating posture. All of this is painfully shameful for him.

But it does not end there. The loiterers in the street who are awaiting their chance to perform the KEZAZAH ceremony will be distracted from tormenting the prodigal and will instead run after the father, amazed at seeing this respected village elder shaming himself publicly.

Compelled by his immeasurable compassion, the father races out to his son. You see, He knows what his son will face in the village--- that the Kezazah awaits and will cut him off.

Instead, in meeting his son on the outskirts the father knowingly, takes upon himself the shame and humiliation that is due the prodigal. Sparing him the punishment that justice demands.

After their dramatic reunion, the actions the father takes show how immediately he restores all that had been lost. For example kissing him not just once, but again and again was a robust PUBLIC demonstration to the entire village of his overwhelming joy at seeing his son. Next, he orders the servants who are there on the road with him to dress the boy as a son. Notice he doesn’t say, “Go clean up and get dressed”….rather he orders the servants to bring the best robe and dress him. They are to honor him as a son of the house.

The best robe is naturally the father’s finest robe. The prodigal will attend the banquet attired in this father’s most elegant robe. The guests that night will recognize the robe and treat him in a respectful manner because of the clothes that he is wearing. They will fully understand that he has been fully restored to Sonship.

To have shoes put on his feet is a symbol of his new rank. Slaves go barefoot. Sons wear shoes.

The fatted calf that is killed for the banquet is really a “prime beef”. The word fatted is from the word “grain”. Hence the fatted calf is a grain-fed animal with high quality meat. Meat is a rare delicacy in the village. The father is making a public statement about how joyful he is that he has found his lost son land brought him from death to life.

Thus we see that it is the father in this parable, AND ONLY the father that is able to restore. And that restoration comes through grace alone.

The Pharisees were always complaining that Jesus accepted sinners and ate with them. But Jesus doesn’t apologize, ever. In fact, He not only accepts the sinners, the broken ones, but he RACES to restore them with open arms!

“We may not fully understand the theology of the atonement, nor completely comprehend the depth of God’s love and mercy for us in giving us the free gift of life by the sacrifice of his son. But I think we all yearn to feel the touch of grace in our lives, moments that capture the soul and hold it, a willing hostage away from the assaults and demands of the unjust world in which we live.”

Posted by BARE RECORD OF TRUTH at 1:03 PM

There's a lot here; it will take time to comprehend it all--

I enjoy reading your blog. Thank you.
A Father that runs to us.
"To those who fall, how kind Thou art! How good to those who seek!
Thank you to Our Good Kind Father.
SR

Beautiful summary! I loved it! Such glorious gems of truth ---- mined from this thought provoking parable. That HE runs to every single one of us, sparing us the heartbreak and humiliation of our very own (and much deserved) Kezazah is an incredibly beautiful demonstration of the love and mercy of our Lord and Savior, Jesus Christ. Always been my favorite parable. Thank you for posting!!!
~E.B.B.

Beautiful. Thanks to you and the author.