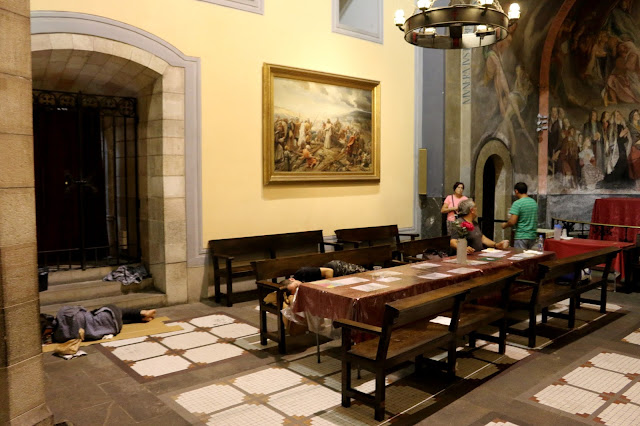 Recently I visited a small church in old city of Barcelona that was built in 1141. This Church was unlike all of the ornate Catholic Cathedrals that we saw all through Europe.  It was simple, small and unassuming.  If you visit this church during the week, it is not closed unlike thousands and thousands of our chapels around the world.  During the week they turn the church into a soup kitchen and a place for the homeless to sleep. The Church pew benches are rearranged and placed around portable tables. Plastic table cloths are laid down on the tables and dinner mats are used like you would see at a restaurant. The local parishioners volunteer days to come to their church to serve the homeless. Food is prepared and served to the hungry. This church is a place of refuge for the homeless, the outcast, the hungry and the needy.

Above is the photo I took of the church. You can see some of the homeless sleeping on the floor and on the benches. On one of the walls there is a beautiful painting of Christ serving the five thousand with five loaves of bread and two fish.


Compare that to what is happening in Salt Lake City.

I have written a few blogposts about the growing problem of homelessness in downtown Salt Lake. The Road Home which houses over 1000 people is being shutdown. Three smaller locations are planned to be built in other areas of the city. These new facilities are planned to only accommodate 150 people each. The numbers don't add up, because without the Road Home, this will effectively reduce shelter beds by 500. One of the proposed sites is owned by the LDS Church. I posted about it here.
This week the Salt Lake Tribune published this article about the financials of the sell of this proposed site. Here is the news article.


" Utah will fund the purchase of a downtown thrift store owned and operated by the Mormon church for $4.46 million following negotiations on the final of three future homeless shelters to be opened by July 2019.

Even though the SL County Assessor's office values the property at about half of what the LDS Church is selling it for, the property was apparently appraised at about the selling price.

My purpose for even pointing this out is.. why doesn't the LDS Church just donate this to the city to build a homeless shelter. I mean we donated a mansion names after Thomas S Monson to the University of Utah. It appears that we might even be making a profit off the sell of the land especially if it was valued on the tax appraisals  at almost half of the selling price.

Also, one more thing I want to point out:

Instead of helping the homeless find a place to sleep and eat, We are arresting them. It is called Operation Rio Grande. This past week alone police officers have arrested 423 people that are homeless.  Below are some photos from this article. The first photo shows the brand new mobile command center. It is large hi-tech moving vehicle used to coordinate the efforts of the law enforcement.   Now I understand that many of those on the streets have drug and alcohol addictions. Many have to resort to crime. I agree that arrests should be made for illegal activity and unlawful behavior. But homeless is not a crime.. and maybe it is more of a crime on our part for not helping them.


Here is the news article:
http://kutv.com/news/local/inside-the-heart-of-operation-rio-grande 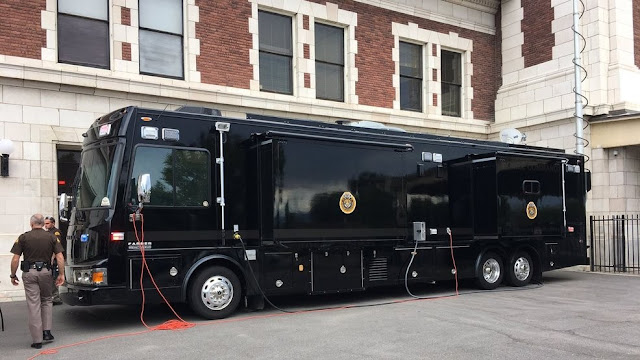 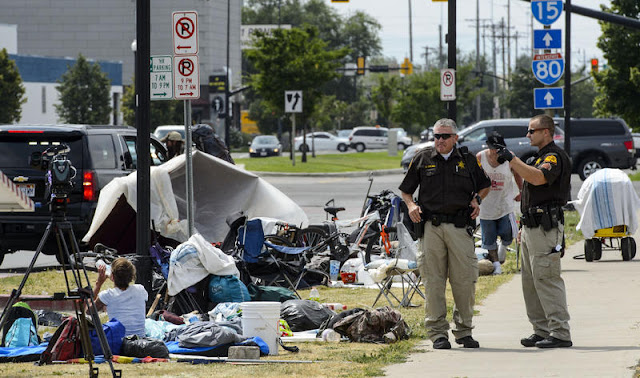 Posted by BARE RECORD OF TRUTH at 8:05 AM

Regarding that stuff about the LDS church donating a mansion named after Thomas S Monson to the wealthy University of Utah, and yet selling a property in downtown SLC for the homeless, this quote came to mind:

"There are churches that are built up to get gain. We can’t do that. We shouldn’t even tempt one another to do that. Realize that every one of us is required to sacrifice and that is a good thing. That is a godly thing. It is a reflection of the sincerity of your heart. If you are sacrificing because of this, then you are probably pleasing the Lord. And if your religious practice is building something up to get gain, you are going to be burnt like stubble, so enjoy the gain.


Seems that simple, unassuming church in Barcelona had it right.

I've gone back and forth, over and over again, why there is corruption in the world (Religion, Political, Social, etc.) and truly there are many facets that we could list. I have come to believe in boils down to a lack of knowledge. HOW to have our hearts changed, HOW to go about doing good, HOW to be humble and rid ourselves of pride, et cetera. We lack knowledge, we are void of light, collectively.