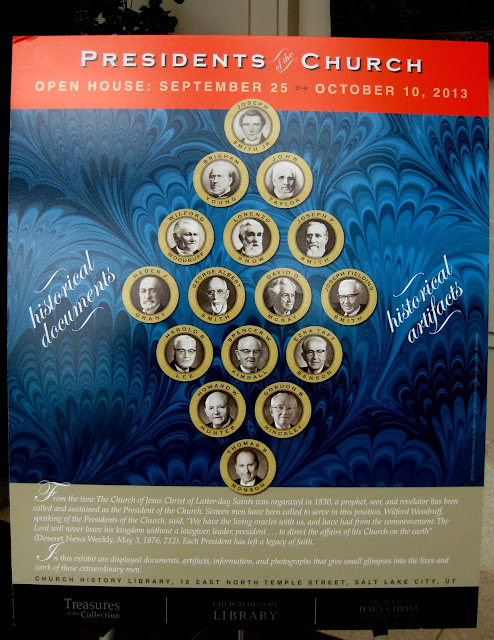 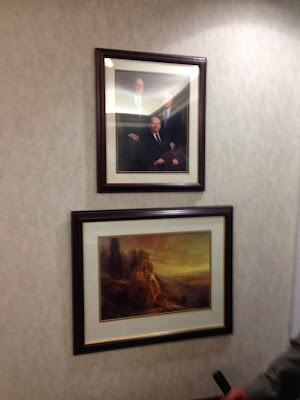 Very interesting. I think we often place things in order of importance to us, subconsciously. This is definitely a reflection on the current state we find ourselves in.

Seeing the Not Even Once Club displayed in that way makes me so, so sad. The underlying messages in that book are so destructive, and teach reliance on self and unattainable perfection over reliance on Christ and His amazing gift of grace that completes our efforts of repentance.

This really helps those of us who live far from the environs of the "Church HQ" to better see what is happening there. It has become more and more clear over the months and years. The "houses" of books impressively erected as pillars appear to be a possible danger to passers-by, particularly for any hazarding an attempt at partaking of those books. Perhaps they should put up fences to protect customers.

Wow. I would never put anything above a picture of Christ (I know it is just a picture someone painted but it is a symbol of Him). I feel the church has slowly been losing light and knowledge sine the murder of Joseph and Hyrum Smith. The church leaders have focused more and more on personal wealth (writing books, appearing with rich and famous persons, sittting on corporate boards etc). I am still upset by that stupid mall. What kind of material cost $3,000 a square foot!

and the discussion (OP) completely left out Elder Edward Dube from Africa!!!

White men were mentioned; this African brother was completely left out--

oh well, I figured I could complain on here--

As for this open house--

Why should we be surprised that a picture of Church leaders is put 'above' Christ, especially in a Church that preaches & practices the doctrines of those men & leaders far above the teachings of Christ, their doctrines are complete opposite to Christs. Choose you this day who you are going to follow, for you can't follow Christ & the Church.

The church's prophets since Brigham Young believe they 'trump' Christ and can change or ignore his teachings. For they know they can't prove they are true prophets by preaching his exact teachings, cause they don't even live or believe in his teachings or him.

'Prove your doubts' don't doubt them, for that is how the Holy Ghost warns you of falsehoods & false prophets, by giving you feelings of 'doubt'.

Of course false prophets will tell you to doubt your doubts and the feelings the Holy Ghost is giving you, for he is trying to reveal their falsehoods. I found through the years that most of my doubts about the Church were very true and valid.

God & true prophets command us to question everything and everyone, doubt 1st, don't just follow blindly, question & prove all things, especially our doubts, don't ignore them or doubt them. Your doubts will save you.

Only hold fast to that which you have 'proven' to be true by comparing everything & everyone with what Christ taught in the New Testament.

I, too, was disturbed by Pres. Uchdorf's talk. To me, it felt as if he was also saying, "We don't have good answers to address your doubts, so why don't you just reassess why you have them, find fault with yourself for having them, and get back to believing in full faith..."

Heaven help us once the wards start teaching priesthood/Relief Society lessons based on this talk, essentially saying "doubts/questions are bad while acceptance and trust in our leaders is good".

It was good to hear so many speakers mentioning Christ.

Elder Uchdorf's 'doubt your doubts' was a crafty & desperate attempt to try to stop the huge flow of members leaving the church because they are finding out things are not as they were told or seem, far from it.

Little crafty sayings will never stop the truth and keep people from waking up, for they are led by the Holy Spirit & God, who gives them those doubts, and church leaders only reveal their pretenses & weaknesses even more when they try to teach such trite falsehoods.

Perhaps his was a talk no one could complain about?

Wasn't it Denver Snuffer who first said to doubt doubt?

Toni ...yeah I think it was