photo taken from the top floor of ZIONS BANK. 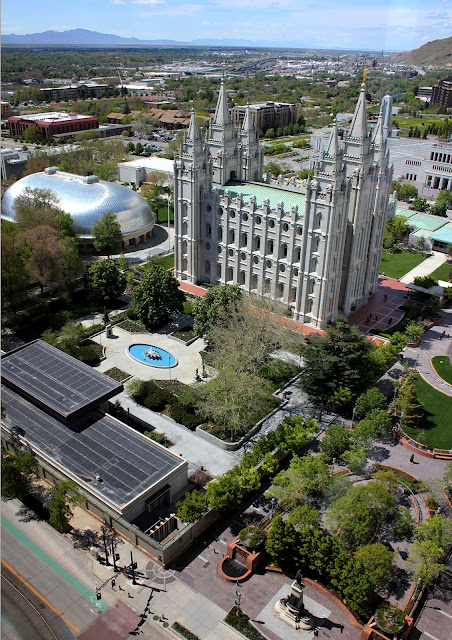 This was written by a friend of mine with permission to post.


“Zion is not in our power to create or build, except as we individually repent, be baptized and come to the Lord individually (especially for us Gentiles).  The Lord will take care of Zion...it is His to build...not ours.  We have never been given any kind of deadline or time line to create it...can't be done.  We can only create the image of it , which might be fine, but it can't come before the "first thing,” or our hearts. We won't find Zion in spending billions "fixing up" downtown SLC, in order that our self-proclaimed sacred places won't be defiled. This is not Zion, for Zion is not to be protected by the influx of large sums of money to pretty it up. The Lord will dwell there (literally) and will sustain and protect it (the inhabitants). The shadow by day, and pillar by night. We desperately want Zion (and who can blame us, we really do want peace and beauty), but we think to create it by our own hand, works, and money, and not in the Lord's way (by literally seeking his face out). This is the only way for us Gentiles to "get in."  This is difficult and appears to distract us from building it. Nothing is further from the truth. Zion is, after all, like the definition of "the church."  It is found wherever one has entertained the Lord. And here's where we see truth from darkness: can Zion be built in such a way as to desire to "exclude?”  Indeed not. The pure in heart do not wish to exalt themselves. They wish to descend below all in service.  This is a good indicator, I think. Such attitudes of service and descending below all are the hallmark of those who would follow Him and live in Zion. But we feign those attitudes. "Here we come, to the rescue!" We have this serious need to affirm to ourselves that we are in fact "doing the real thing," that we indeed have Zion, that we can actually reach out and rescue others (implying we ourselves are saved).  I'm not so sure we are/do.”
Posted by BARE RECORD OF TRUTH at 9:09 AM No comments: 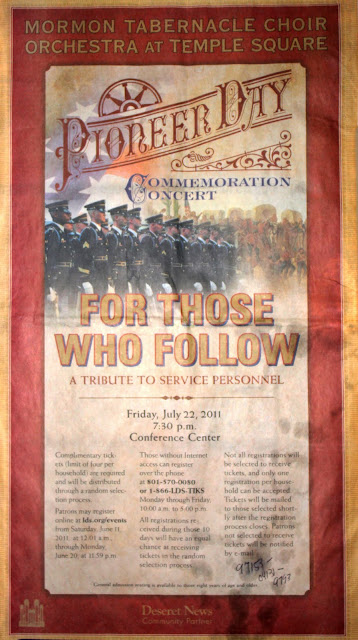 06: WILL I RECOGNIZE HIM.. or is it possible that I am a MODERN-DAY JEW?

If I lived over 2000 years ago, would I have been just like the law abiding Jews steeped in religious tradition and assumptions and not have recognized Christ?
An interesting event occurred last week that has caused me to think about the answers to this question.
On July 8, 2011, there was a news report of an arrest and imprisonment of a homeless man who requested to meet with LDS President Thomas S. Monson.  The charge that led to his arrest was "stalking" which if convicted could be a felony.
36 year-old Benjamin Tucker Staples, who goes by the alias Jesus Christ, was booked into the Salt Lake County jail Friday where he's being held on two Class A misdemeanor charges.
Police say Staples was taken into custody after making repeated visits to the LDS Church's administration building in downtown Salt Lake City where he demanded to meet with President Monson.
He reportedly made five such visits since June 25th and in each instance had to be removed from the building by Salt Lake Police. Church security officers had warned Staples not return to the property and had issued a written trespassing order. Bond for Staples' stalking charges total $26,850. His case is being heard in Salt Lake's Third District Court. For a homeless man, coming up with that bail money might be very difficult, he probably will be in prison for awhile.

The predominant religious leaders at the time of Jesus Christ were the Pharisees. One of many of the religious sects responsible for the imprisonment and ultimate crucifixion of Our Savior. I have always been taught that that the Pharisees were wicked and evil men. But in reading the definition in the LDS Bible Dictionary, I found that I had much in common with them.
Quoting for my scriptures,

"Their belief included the doctrine of immortality and resurrection of the body and the existence of angels and spirits. They prided themselves on their strict observance of the law, and on the care with which they avoided contact with things gentile. They encouraged self-sufficiency and spiritual pride."

The Pharisees were temple-going and a very religious people who observed the Law passed down to them by God through Moses. They followed the ancient prophets and followed the high priests who had the authority to sit in Moses’ seat.
Yet, here comes a man named Jesus Christ, one who did not have the recognized authority by the current religious leaders. He did not have social standing, and probably would be considered a man without a permanent home… basically homeless. Would I have agreed to have him imprisoned if he did not fit the mold of my religious leaders or asked to speak several times with the Presiding High Priest?
This recent news event has now given new meaning to the scripture found in Matthew 25: 35-36
“For I was an hungred, and ye gave me meat: I was thirsty, and ye gave me drink: I was a stranger, and ye took me in: Naked, and ye clothed me: I was sick, and ye visited me: I was in prison, and ye came unto me. Then shall the righteous answer him, saying, Lord, when saw we thee an hungred, and fed thee? or thirsty, and gave thee drink? When saw we thee a stranger, and took thee in? or naked, and clothed thee? Or when saw we thee sick, or in prison, and came unto thee? And the King shall answer and say unto them, Verily I say unto you, Inasmuch as ye have done it unto one of the least of these my brethren, ye have done it unto me.
Posted by BARE RECORD OF TRUTH at 10:01 AM 2 comments: