Below is a depiction of King Noah, his priests and Abinadi painted by Minerva Teichert . It is a different image that we are normally see to illustrate this Book of Mormon account found in Mosiah. (It is missing the leopards etc). I post this different painting on purpose as a precursor for the next several posts on King Noah and Abinidi. I did not write them, but post them with the permission of my friend . It is my hope in this series, we will look at this account differently, and liken to our day. 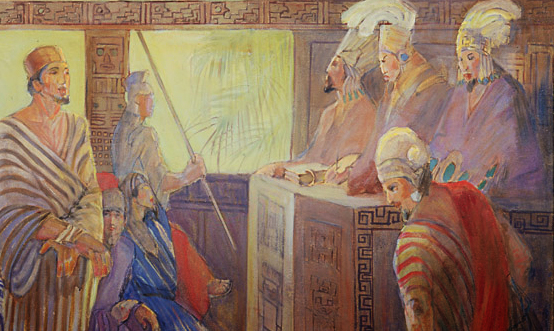 King Noah and His Kingdom, Part 1

“And now it came to pass that Zeniff conferred the kingdom upon Noah, one of his sons; therefore Noah began to reign in his stead; and he did not walk in the ways of his father”
Mosiah 11:1
.
The kings (and later the Chief Judges in a way) of the Book of Mormon received through  “conferral,”  or “consecration,” or “charge,” not only the rights to rule and reign over a kingdom, but also stewardship over plates of records, and other implements of kingship (Mosiah 1:15-16; 29:42; Alma 2:9). Their stewardship was most often intermingled with religion.

Compared to his son Noah, Zeniff was a good king. He held authority to minister temporally and spiritually in the affairs of his kingdom and he “conferred” that authority on his son Noah. His son Noah walked not “in the ways of his father” while he was king over the land. It’s hard to imagine Zeniff conferred the authority upon Noah to preside and rule over the kingdom, despite knowing his son to be an idolatrous, lazy man (Mosiah 11:6). Perhaps he couldn’t see it. Or, perhaps, Noah wasn’t always who we read about in our record; we know the unfortunate disposition of almost all men as soon as they are given a little authority, as they suppose (D&C 121:39-40).

It should go without saying, but is important to say - just because Noah’s father was a good man didn’t make Noah a good man. Just because Noah inherited the kingdom, or had the kingdom conferred upon him, didn’t mean that he faithfully thereafter discharged the obligations that had fallen upon him. Just because Noah received authority to govern temporally and spiritually in his kingdom, didn’t mean he was ever able to find favor with heaven. And just because Alma, on the other hand, was subject to a blind and darkened slumber while serving as Noah’s priest, didn’t mean he had no opportunity for repentance, growth, progression, and redemption.

It is easy to see from the record of Noah, his kingdom and people, why it is not “expedient” that we should have a king to rule over us. “For behold, how much iniquity doth one wicked king cause to be committed, yea, and what great destruction!” (Mosiah 29:17).
Posted by BARE RECORD OF TRUTH at 2:54 PM 3 comments: