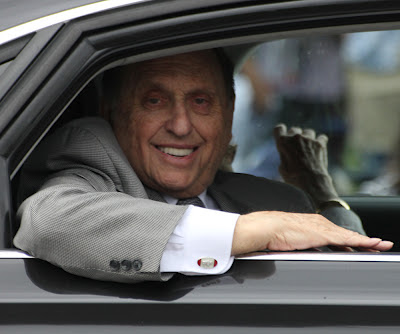 A gala event is planned for August to celebrate the 85th birthday of President Thomas S. Monson of The Church of Jesus Christ of Latter-day Saints. The masters of ceremonies duties for the celebration, called "Golden Days: A Celebration of Life," will be shared by former San Francisco 49ers quarterback and Hall-of-Famer Steve Young and former network news anchor and author Jane Clayson Johnson. The event will feature Broadway and other musical selections performed by the Mormon Tabernacle Choir, Orchestra at Temple Square and notable guest artists, who have not yet been announced. Choir President Mac Christensen said, "I happen to know the songs being performed will delight President Monson."

The evening will also include a nostalgic look back at Pres. Monson's life, including his childhood, marriage, time in the Navy during World War II, and decades of service. He was called as a bishop of a congregation at age 22 and has served for nearly a half century as a general authority of the church.
A news release from Mormon Newsroom quotes Young as saying, "This celebration is a great way to let (Pres. Monson) know how much he is loved and appreciated. It's a privilege to play a small part in that recognition."

Sidenote:
The past 8 eight posts have been about the Prophet Abinadi. Doubtful he was every thrown a lavious Birthday Party. I hope to write up similar posts about another prophet by the name of Samuel. The following is from a blog post.  http://denversnuffer.blogspot.com/2012/03/importance-of-scriptures.html

"This example from the Book of Mormon is a clear warning intended for our day. Christ's admonition to "Search the prophets" is just as important an admonition now as it was then. So the challenge remains to keep ourselves ready, and listen to the words of the Prophets. It is our common misconception, however, that there will never be another Samuel the Lamanite who is an outsider and without credentials to be given a message for us by the Lord. We expect that if there is a message for our day it will come from the head of the church, not some obscure outsider, like Samuel. We imagine it is always safe to disregard such characters. It is curious, however, that the Book of Mormon, which is the "most correct book" includes this odd departure as an example. It is odd the Nephites never figured out our system. It is so much better than theirs was. We really are a royal generation, the most blessed of all who have ever lived! We never face such a test, because we imagine we have an authorized source of truth, an institutional charisma that can never fail, and through which we can never be led astray. The Lord has made it so much easier for us in our day. It somehow makes sense to us, but leaves me wondering if the Lord ought not apologize to the Nephites for making it so much harder for them. Then there is that unfortunate recent announcement by the church a few days ago about church leaders speaking "in the absence of revelation" which complicates these questions.

It makes me wonder if our eternal salvation depends on sorting out the truth from error. Or, alternatively, if it matters in the more immediate unfolding history preliminary to the Second Coming and the whole earth being cursed if we get it wrong."
Posted by BARE RECORD OF TRUTH at 1:02 PM 15 comments: