WHY I WRITE THIS BLOG - which began 10 years ago today

Ten years ago today I wrote my first barerecord blogpost. I debated on whether to call it 'bare record' or 'bear record'. Both the word bare and bear are descriptive of what I hoped to accomplish on this blog.

BARE means to uncover or reveal, to exposed to view, undisguised.
BEAR means to withstand something difficult or painful, to support or hold up; sustain, bring forth, provide evidence for.

I know alot of what I have shared might have been unpleasant to some, but it has been my hope over the last 10 years to kindly point out evidence in our day that  maybe "All is not well in Zion." In addition, I  wanted to share highlights of significant events in my life as well as events happening on the earth.

I recently came across a book called 'Leading from the Edge of the Inside'. It is written by Richard Rohr, a Franciscan monk. In his book, Rohr talks about about three groups of people found in any institution or even a religious organization. The groups are the insiders, the outsiders, and the ones on the 'edge of inside'. Those at the core of the inside are those who are the loyal diehards. They are the 'all-is-well' group and quickly justify anything that might be viewed as less than positive. The 'outsiders' on the other hand want nothing to do with the organization and would be considered as apathetic or even antagonistic. But, those on the 'edge of the inside' know, love and understand both groups and can see the mistakes being made by the institution. Their loyalty and commitment are sometimes questioned by the insiders.  The "edgers" are in a unique position to evaluate and hopefully help the organization to look in the mirror to see the flaws and mistakes. The edge of insiders are sometimes misunderstood or disregarded because they are not on the core inside. But this does not mean they have nothing to say or that what they have to say is not valid or important. Many times it's about how the message is relayed. If done properly, it could influence the organization to correct their errors.
A great example of some "edge of insiders" are the thousands and thousands of members of the Church who spoke out publicly about the First Presidency's decision to remove the historic Manti Temple murals. Here is a quick timeline of what happened. 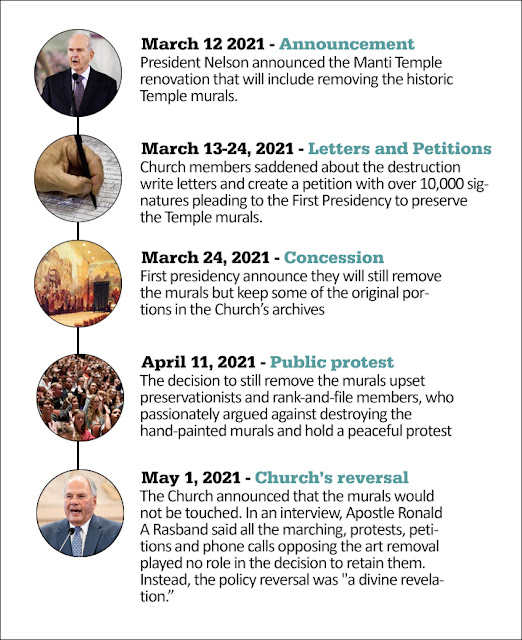 From the Salt Lake Tribune article covering the story it reported.

President Russell M Nelson said in a prerecorded message, “we have been impressed to modify our earlier plans for the Manti Utah Temple so that the pioneer craftsmanship, artwork and character will be preserved, including the painted murals loved by so many. We will leave those murals where they are located now — inside the Manti Utah Temple.”

In an interview, Rasband called the move a divine “revelation” and said that protests, petitions and phone calls — even a march in downtown Provo — opposing the art removal played no role in the decision to retain them.

So in less than a 2 month period of time, we saw a complete reversal from the Prophet announcing that Art Masterpieces being removed from both the Salt Lake and Manti Temples to accommodate a change in the room configurations. Instead we are told that a new revelation came from the Lord reversing the first revelation to remodel the Temple.  Which one was revelation? the initial decision to remove the murals or reversal to keep murals? Does the Lord really flipflop like that?

I find it very hard to believe that all of the pleadings of the Church members to the First Presidency played NO role in the decision to save the murals like the apostle Rasband stated.  “I’m going to be so bold as to call it a revelation,” Elder Rasband concluded.

Whether or not the decision to keep the murals was purely revelation without any influence by those who spoke out publicly, I am grateful for other 'edge of insiders' who I believe helped to save the Temple Murals. I think it is important to preserve history and even more important to preserve what Joseph Smith originally restored. For those who haven't see the murals that will now be save, here is a quick description of the one of the murals that was written on an online article.

Unlike prior World Room murals depicting fighting animals, Teichert portrayed the pageant of human history in a fallen world. Beginning with the Tower of Babel portrayed in the back of the room, she painted the history of the Gentiles and Israelites on opposing side walls (including Abraham, Joseph, Moses, the crusaders, Columbus, the Pilgrims on the Mayflower) culminating in the gathering of the early Latter-day Saints to the North American Continent and their efforts to build Zion, portrayed on the front wall. All human history marches towards the restoration, the gathering of the Saints, and ultimately the establishment of Zion. To remove these murals is akin to painting over the Sistine Chapel—in terms of LDS art, history, and women’s contributions and achievement. Most importantly, the decision is irreversible if the murals are destroyed 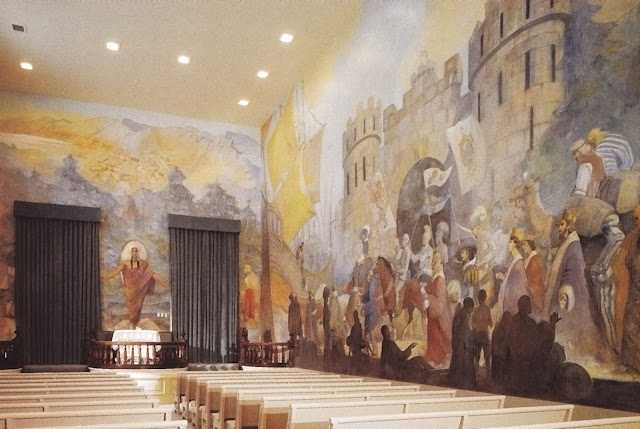 Posted by BARE RECORD OF TRUTH at 2:25 PM No comments: