266: STAND FAST WITHOUT FEAR IN FACING THE ONCOMING WAVE

In a dream I saw myself in the middle of the ocean at night. The water and waves were black as tar. I wasn't on a ship, necessarily,.. but I WAS the ship trying to navigate through the waves and the black ocean water. I felt a sense of uneasiness and through the light from the moon I could see a HUGE massive wave approaching. 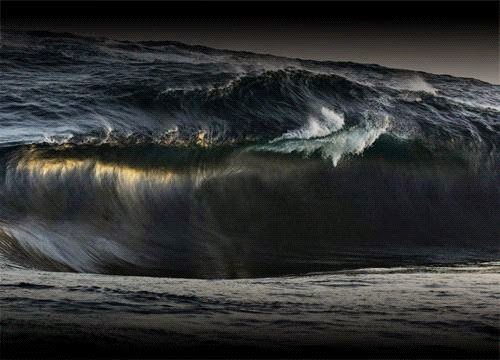 I knew that I didn't have alot of time, and I knew that the wave had the power to destroy and or capsize any ship in it's path. The only way I knew that I would be able to survive the oncoming wave was to face the wave straight on... without deviation and without fear despite the fact that the wave was visibly more powerful and bigger than I was. I knew that if I was off just one degree to the left or to the right, I would not be able to withstand the power and force of wave... but instead be tossed over and capsize.

When the wave was directly on top of me, I desperately navigated to be perfectly perpendicular to the wave to face it head on. In doing so, the bow of my ship pierced the wave, cutting and splitting the wave in half allowing my ship to stand fast and not being overtaken.

For a brief minute as the wave passed over.. I was completely helpless and at the mercy of the Lord after all I could do. I had to surrender and allow whatever was to happen, to happen. As this huge wave passed over, I was relieved to find myself still afloat....however, I was surprised to see more giant waves in the distance that I still needed to navigate through.


The following advice was recently given at lecture about courage:

"Live this life nobly, fearlessly. When you take the wounds that come your way make sure that they come to your front! Don't let them shoot you in the back. Go about your life boldly, nobly, valiantly. Because it is only through valiance in the testimony of Jesus Christ that you can hope to secure anything. Not valiance in your fidelity to anything other than Jesus Christ. The fact of the matter is that faith must be based in Him, and in Him alone.

We are on this earth to learn about the power of godliness. This place, this terrible fallen world, this glorious opportunity in which sacrifice is actually possible. You don't avoid it, and you don't necessarily seek it out. But when it comes upon you, you face it down bravely. You stand where God places you.  And it's time now we stop running away from the conflict. It's time for us to be valiant once again. Do not be fearful. Cowardice and fear are the opposite of faith."


May we all be brave in the coming days, and standup for truth despite the consequences.
May we all be faithful and valiant once again.

Personal Sidenote:  About five years ago I became friends with a Salt Lake Police officer. We shared a common love for the Gospel of Jesus Christ. We exchanged books, and talked with each other about what we were learning. We would met for lunch and had him over to our home. One time, I saw him downtown Salt Lake helping a couple with a small child. He gave them a few bags of clothes that he had brought from home. He wanted to change the perception of the stereotypical police officer. He truly loves people and wants to serve the less fortunate. He stands firm in what he knows is right. A few days ago he was asked to turn in his badge and his gun for asking to be reassigned to a different police assignment instead of participating in a motorcade in the annual Salt Lake City Pride parade. He is currently under heavy fire by the media nationwide. I am grateful for friends who stand up no matter the cost.

We live a in world where right is wrong and wrong is right. Each of us...sooner or later will have to brave and face the consequences by those who have temporary power over this world.
Posted by BARE RECORD OF TRUTH at 2:55 PM 7 comments: