86: SCHOOL OF THE PROPHETS


I was really moved when I read the following account of the appearance of the Savior and the Father to the School of the Prophets in 1833 penned by Zebedee Coltrin.  I thought it was important to share on this blog for others to read. 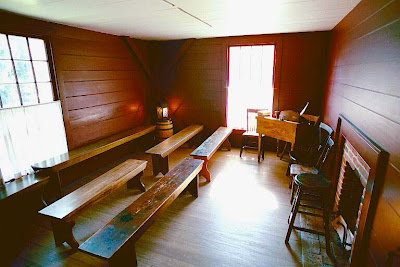 "The salutation as written in the Doctrine and Covenants [D&C 88:136-141] was carried out at that time, and at every meeting, and the washing of feet was attended to, the sacrament was also administered at times when Joseph appointed, after the ancient order; that is, warm bread to break easy was provided and broken into pieces as large as my fist and each person had a glass of wine and sat and ate the bread and drank the wine; and Joseph said that was the way that Jesus and his disciples partook of the bread and wine. And this was the order of the church anciently and until the church went into darkness. Every time we were called together to attend to any business, we came together in the morning about sunrise, fasting and partook of the sacrament each time, and before going to school we washed ourselves and put on clean linen.

At one of these meetings after the organization of the school, (the school being organized_ on the 23rd of January, 1833, when we were all together, Joseph having given instructions, and while engaged in silent prayer, kneeling, with our hands uplifted each one praying in silence, no one whispered above his breath, a personage walked through the room from east to west, and Joseph asked if we saw him. I saw him and suppose the others did and Joseph answered that is Jesus, the Son of God, our elder brother. Afterward Joseph told us to resume our former position in prayer, which we did. Another person came through; he was surrounded as with a flame of fire. He (Brother Coltrin) experienced a sensation that it might destroy the tabernacle as it was of consuming fire of great brightness. The Prophet Joseph said this was the Father of our Lord Jesus Christ. I saw Him.

When asked about the kind of clothing the Father had on, Brother Coltrin said: I did not discover his clothing for he was surrounded as with a flame of fire, which was so brilliant that I could not discover anything else but his person. I saw his hands, his legs, his feet, his eyes, nose, mouth, head and body in the shape and form of a perfect man. He sat in a chair as a man would sit in a chair, but this appearance was so grand and overwhelming that it seemed I should melt down in his presence, and the sensation was so powerful that it thrilled through my whole system and I felt it in the marrow of my bones. The Prophet Joseph said: Brethren, now you are prepared to be the apostles of Jesus Christ, for you have seen both the Father and the Son and know that they exist and that they are two separate personages.

This appearance occurred about two or three weeks after the opening of the school. After the Father had passed through, Joseph told us to again take our positions in prayer. We did so, and in a very short time he drew our attention and said to us that Brother Reynolds Cahoon was about to leave us, and told us to look at him. He (Brother Cahoon) was on his knees and his arms were extended, his hands and wrists, head, face and neck down to his shoulders were as a piece of  amber, clear and transparent, his blood having apparently left his veins. Upon the attention of the brethren being thus called to Brother Cahoon, the change seemed to pass away and Joseph said that in a few minutes more, Brother Cahoon would have left us, but he came to himself again..

http://www.boap.org/LDS/Early-Saints/ZebC.html
Posted by BARE RECORD OF TRUTH at 9:23 PM 14 comments: