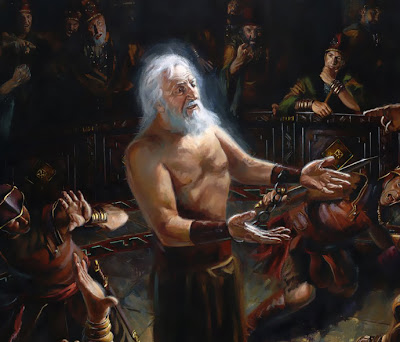 “And it came to pass that there was a man among them whose name was Abinadi;
and he went forth among them, and began to prophesy, saying:
Behold, thus saith the Lord, and thus hath he commanded me, saying,
Go forth, and say unto this people, thus saith the Lord – Wo be unto this people, for I have seen their abominations, and their wickedness, and their whoredoms;
and except they repent I will visit them in mine anger”
Mosiah 11:20.

This is a pattern that we see most prolifically in the Old Testament. The phrase is used there over 400 times by prophet-writers. Many of our revelations as contained in the Doctrine and Covenants use this phrase.

The prophets are conscientious and deliberate when attesting to the truthfulness of their message by invoking the name of the Lord. To use this phrase without authority and without an authentic message from God would be to take the name of the Lord in vain. This kind of authoritative message, spoken by a messenger who received that message directly from God, is the type of message to which the Lord was referring when he closed his “Preface” to the Doctrine and Covenants:

“What I the Lord have spoken, I have spoken, and I excuse not myself; and though the heavens and the earth pass away, my word shall not pass away, but shall all be fulfilled, whether by mine own voice or by the voice of my servants, it is the same” (D&C 1:38).

“It is the same” because his sent servants neither add to, nor do they take from the message that was given to them from the Lord, but deliver it according to the will of the Lord. We've superfluously applied this verse to mean the Lord will stand by anything that is spoken "in general conference," for instance, or anything that is in the Ensign magazine, or anything the Bishop said, for "whether by mine own voice or by the voice of my servants, it is the same." This is wrong, and the Lord has never promised to stand by all such messages. The Lord "excuses not" himself. The philosophies of men, regardless of the calling or office of the man who utters them, and no matter how sincere he may be in his attempts to impart them, cannot save you and do not originate with the Lord. Any such message is not the same as His "own voice." God's voice is truth (D&C 88:66). The sent servant does not fear the consequences of delivering a message of truth because he knows the Lord, and is his friend. The servant understands that since the Lord excuses not himself, it is not his prerogative to excuse the Lord.

The Lord is very clear in his message to King Noah’s people that he has seen “their abominations, and their wickedness, and their whoredoms.” There is nothing that escapes his all-searching eye (Mosiah 27:31). Even the most secretive acts of men are not secret, and will all be revealed. You have a false sense of privacy that is only illusory. The day is soon coming when the secret acts of all men will be revealed (D&C 1:1-3).

In mercy, the Lord commissioned Abinadi to bring a message of repentance to the people. It was a message they were not accustomed to hearing. Noah’s people enjoyed hearing “flattering” words, because they were able to cloak themselves with a false security in their sinful lives. Because their minds and hearts were conditioned to believe that “vain and flattering words” were of God, they had a very difficult time recognizing the Lord’s messenger when he preached to them an authentic message. Because Abinadi preached repentance to them, telling them of their sins, the Spirit of the Lord struck their hearts with dread, being convicted under a consciousness of their guilt. To them, this feeling was not of God.
Posted by BARE RECORD OF TRUTH at 10:16 AM 1 comment: