Just in case this event is glossed over.. I want to at least mention it here:

I don't blame any of you for glossing over that. Super geeky.

Over an acre of land in the heart of downtown Salt Lake City has been used for over 43 years as a community garden. However, the LDS Church will soon be shutting down the garden and paving over it with concrete. They are turning it into a parking lot. Here is the news article: 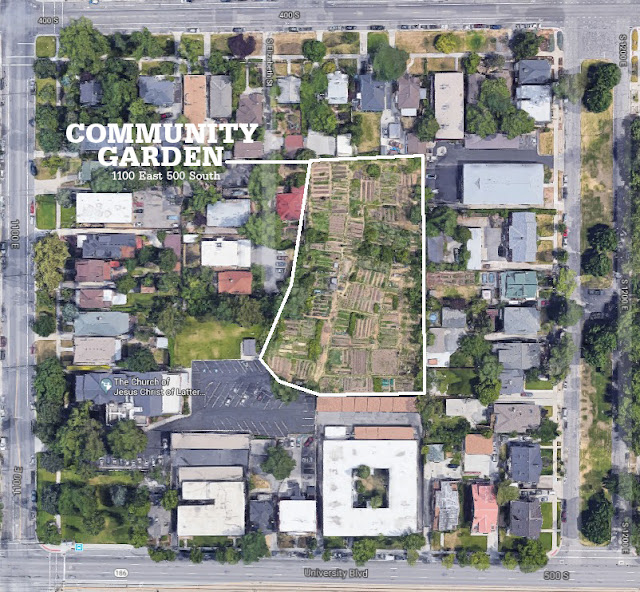 The reason for closing down the garden is because the LDS church is shuffling some of the SLC East side congregations. The Church is closing down the Douglas Ward Building due to diminishing attendance. It currently only has one congregation meeting there. Also the Church is selling another historic church building in the area to the University of Utah.  So to accommodate the closing, the members will need to travel further to a new building.... and unfortunately they need more parking space. The community of gardeners who have enjoyed growing fresh vegatables for decades will need to find another way to be self-sufficient in growing their own food  to make way for parked cars that will only use it for 2 hours on Sunday.

Here is a photo of the Douglas building that the LDS Church is closing down.

I starting writing about this months ago. However, I never posted it but thought it fit the theme of the blog title.

The BP Deepwater Horizon oil spill is regarded as one of the largest environmental disasters in American history. The disaster on April 20, 2010 killed 11 workers as the oil rig sank into the Gulf of Mexico. It took nearly three months to stop the flow of oil. By then, four million barrels of crude had contaminated the ocean and the marine wildlife. The public was outraged at the oil company. BP hired some of the best Public Relations firms to try and regain public favor. Below is one of the commercials that was aired nationally. 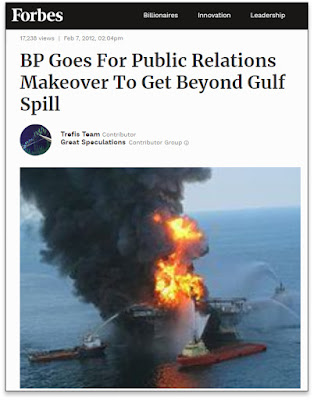 Here is one of their feel good public relations videos:

Damage control is always needed whenever an institution makes a bad decision and they lose public favor. I use the above example as a backdrop for the following:

In the LDS Handbook of Instructions, there has always been a policy to restrict the baptism of children of polygamist families whose parents have practiced or are practicing plural marriage, an illegal form of marriage. However until recently the LDS handbook did NOT contain any restrictions for children whose parents are living in a same-gender relationship and considered LEGAL marriage.

To avoid a potential lawsuit that restricted one type of family that is not legal (polygamy) and not the other family which is LEGAL(same-sex marriage), the below policy was quietly added on November 15, 2017 to the LDS Handbook 1 of Instructions.

Here is the actual wording of the policy: (the bold word emphasis are mine) 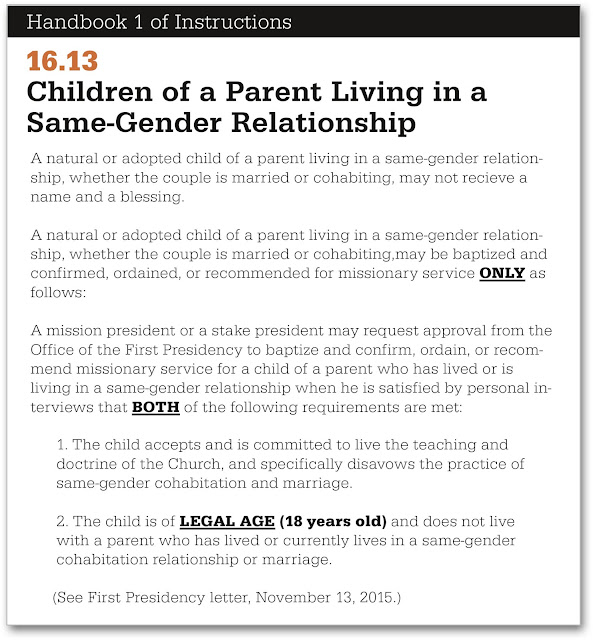 There was NEVER a public announcement of the policy.

However, the policy was leaked to the public and the Church had a BP-type of disaster on their hands. Not only did the Church bar the children from baby blessings and baptism, but deeming same-sex married couples as “apostates” just like those practicing polygamy. It was reported in the local paper that "Hundreds, maybe more, resigned their church membership. Even believers felt wounded and betrayed. Families were torn. Tensions erupted. Some were disciplined by the church. Some died by suicide."

What some would view as caving into social pressure, the First Presidency reversed the policy in April of 2019.

The new policy was announced by President Dallin H Oaks, at a morning leadership training session for the area presidencies and top female officials.

“Effective immediately, children of parents who identify themselves as lesbian, gay, bisexual or transgender may be baptized without First Presidency approval,” Oaks said, “if the custodial parents give permission for the baptism and understand both the doctrine that a baptized child will be taught and the covenants he or she will be expected to make. In addition, same-sex Latter-day Saint parents no longer will be seen as “apostates.” In addition, officials said, the revamped policy clears the way for babies of such couples to be “blessed” in a traditional church ceremony.

This new policy changed was received as an overwhelming positive change. However, many started to question why the first policy was claimed as "revelation" in the first place.

So in order to smooth over and minimize the need for damage control, President Nelson spoke at BYU just days before the October Conference. His talk was broadcasted worldwide.

Here are some of his comments to "smooth over" the member's concerns over the revelation claims for this policy. The first "revelation" claim in 2015 to not allow children under 18 years of age to be baptized and then the "reversal revelation" in 2019.

"The First Presidency and Quorum of the Twelve have continued to seek the Lord’s guidance and to plead with Him in behalf of His children who were affected by the 2015 policy. We knew that this policy created concern and confusion for some and heartache for others. That grieved us. Whenever the sons and daughters of God weep—for whatever reasons—we weep. So our supplications to the Lord continued.

We also took note of LGBT parents who sought permission from the First Presidency for their children to be baptized. In nearly every case in which the LGBT parents agreed to teach their children about—and be supportive of—the covenant of baptism, the requested exception was granted.

As a result of our continued supplication, we recently felt directed to adjust the policy such that the baptism of children of LGBT parents may be authorized by bishops without First Presidency approval, if the custodial parents request the baptism and understand that a child will be taught about sacred covenants to be made at baptism.

We also determined that LGBT parents may request that a baby be named and blessed by one who worthily holds the Melchizedek Priesthood. It is important that these parents understand that ward members will contact them periodically and that when a child who has been blessed reaches eight years of age, local leaders will recommend that the child be baptized."

It is interesting to see the downplay of using "revelation".  For example the word  "They felt directed" and "They determined."

On such important matters, I wonder if it is too much to ask to actually hear the Lord's voice in any of these decisions, like the "Lord directed" or "He determined."