Writers, researchers, and Church historians have teamed up to produce a new history of the Church. It will be a new four-volume history.  The first Volume One will be published later this year. It is called Saints, The Story of the Church of Jesus Christ in the Latter Days.

This new project was announced in this month's February Ensign. See below highlighted in yellow. 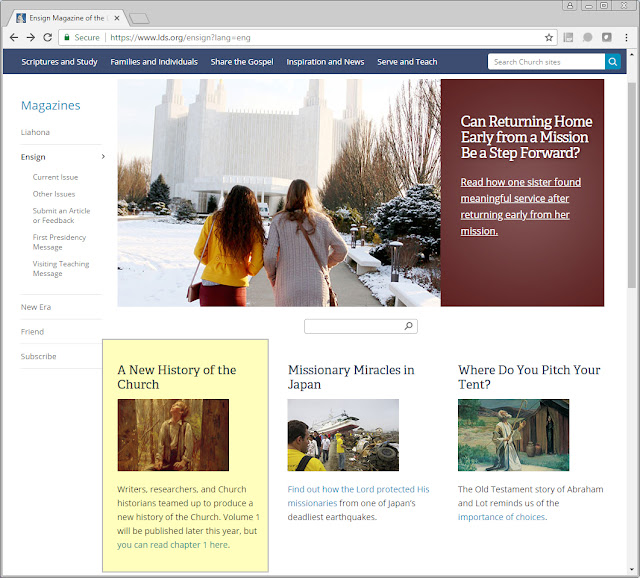 Elder Steven E. Snow, a General Authority Seventy and Church Historian and Recorder announced the new project for the Church in an  article in this month's February 2018 Ensign.  Elder Snow Taken announces that "together, the four volumes tell the story of the Lord’s Church striving to fulfill its mandate to perfect the Saints". He describes that the new style for writing the history will be in a narrative style. Snow took Brigham Young's advise to do so. He says in his Ensign article:

In 1861, President Brigham Young (1801–77) urged Church historians to change their approach. “Write in a narrative style,” he advised, and “write only about one tenth part as much.”

The story on the next pages follows that counsel. I am pleased to introduce a new four-volume series called Saints: The Story of the Church of Jesus Christ in the Latter Days. Chapter 1 is included in this issue, and subsequent chapters will be published in this magazine over the next several months. The first book will be available later this year, and the other volumes will follow.

Saints was prepared in response to the Lord’s commandment to “keep the church record and history continually” (D&C 47:3). Unlike past histories of the Church, it is a narrative history written in an engaging style that will be accessible to both youth and adults.

It will be interesting to see how the new history of the Church will be received. I find it interesting that the title of the four-volume of the new Church History is called "A Story of the Church of Jesus Christ in the Latter Days. As we all know, everyone loves a great story. My youngest enjoys having a story read to her before she goes to bed.

The word 'story' defined in the dictionary has several meanings. Here are a few of them.

The Church has revealed the cover art for the new book that will contain the  "New History of the Church". It is a painting of what looks like a fairytale landscape. But instead of the typical castle, there is beautiful finished Nauvoo Temple on top of a hill. 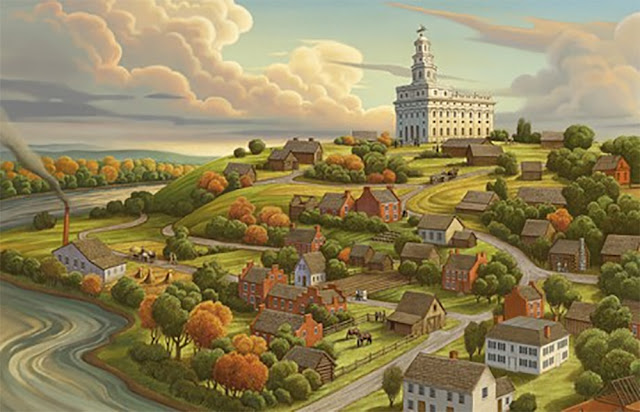 If anyone who has read HISTORY and not the narrative STORY, will know that Nauvoo never looked like this. Because the Saints had to abandon Nauvoo, the Temple was not entirely completed.

Construction was only half complete at the Death of Joseph Smith in 1844. The basement with its font was finished, as were the first floor assembly hall and the attic. When these parts of the building were completed they were used for performing ordinances (basement and attic) or for worship services (first floor assembly hall). After a succession crisis, Brigham Young was "voted" in as the church's leader by the majority of Latter Day Saints in Nauvoo. As mob violence increased during the summer of 1845, he encouraged the Latter Day Saints to complete the temple even as they prepared to abandon the city. The Nauvoo Temple was in use for less than three months. Most of the Latter Day Saints left Nauvoo, beginning in February 1846, but a small crew remained to finish the temple's first floor, so that it could be formally dedicated. Once the first floor was finished with pulpits and benches, the building was finally dedicated in private services on April 30, 1846, and in public services on 1 May. In September 1846 the remaining Latter Day Saints were driven from the city and others from the neighboring region entered the near-empty city and vandalized the temple. The temple was evidently damaged by fire and a tornado before being demolished.
...