The Kirtland Temple and the 2024 Solar Eclipse

One week from today marks the 2 year count down until the second Total Solar Eclipse that crosses over America. I am trying to understand the significance of this cosmic event. It is interesting to look at the cities that fall within the narrow width of the Path of Totality. One of the cities that is almost dead center of the 2024 Solar Eclipse is Kirtland, Ohio. I just got back from visiting Kirtland this week. So many significant events happened in that small little city. If you didn't get to see the 2017 solar eclipse, it might be an interesting place to be at on April 8, 2024 to witness the next solar eclipse. 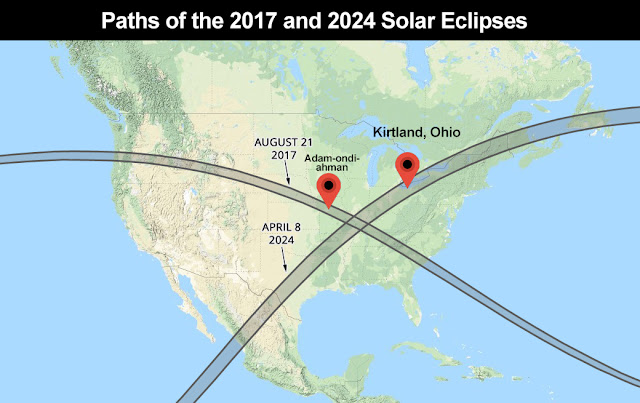 Where the two path meet is considered part of the "Heartland of America". 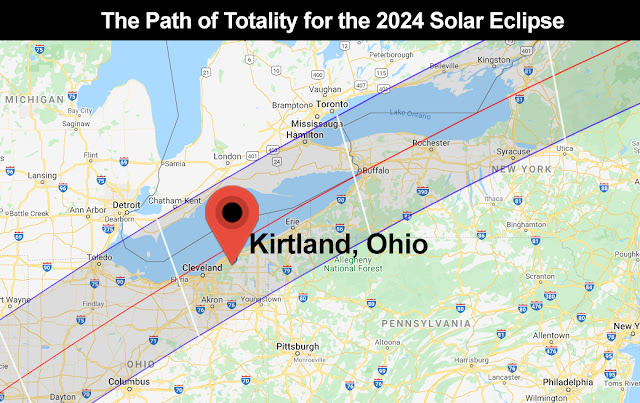 Here are a few photos of the Kirtland Temple.  On Sunday, March 27 was the anniversary of the Temple Dedication and this upcoming Sunday on April 3 marks the anniversary of the Lord appearing to Joseph Smith and Oliver to accept His Temple. Building the Kirtland Temple required the sacrifice of virtually everything of value the Saints had at the time. It is a Holy Place.
While the Temple has been closed for over two years, the Community of Christ Church plans to reopen the Temple in a few month in May. 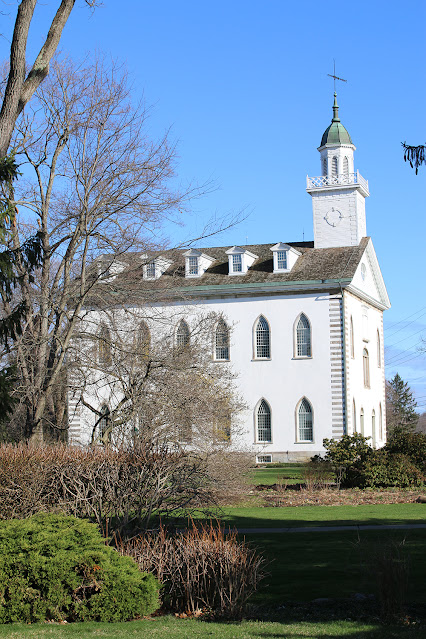 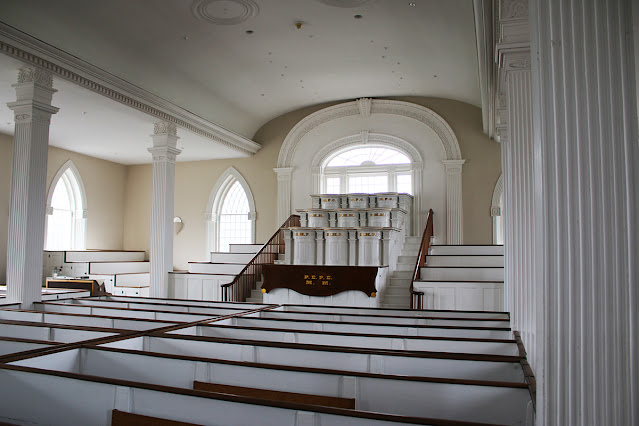 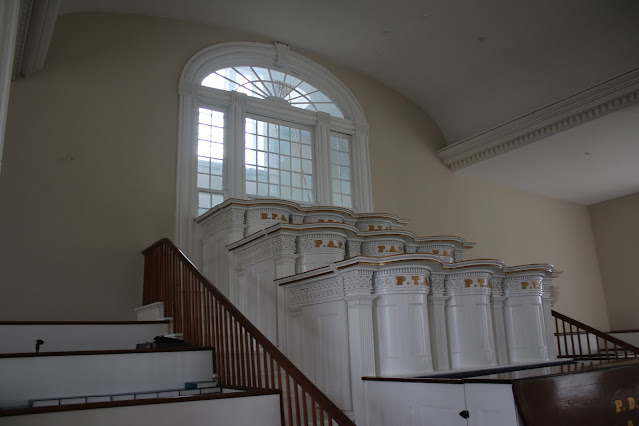 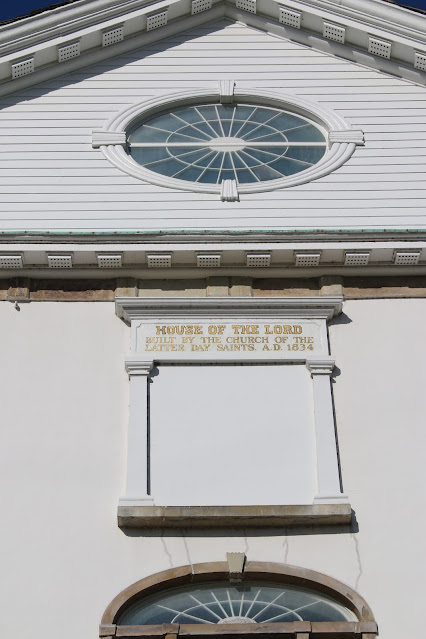 On the third day of April 1836, Joseph and Oliver were in the temple in Kirtland, Ohio. The veil was taken from their minds and the eyes of their understanding were opened. They saw the Lord in his glory standing above them and the breastwork of the pulpit; and under his feet appeared as it were a paved work of pure gold, in color like amber. His eyes were as a flame of fire; the hair of his head was white like the pure snow; his countenance shone above the brightness of the sun; and his voice was as the sound of the rushing of great waters, even the voice of Jehovah, saying:

I am the Alpha and the Omega; I am he who was slain, I am he who lives; I am your advocate with the Father.

Behold, your sins are forgiven you; you are clean before me, therefore, lift up your heads and rejoice. Let the hearts of your brethren also rejoice, and let the hearts of all my people rejoice, who have, with their might, built this house to my name. For behold, I have accepted this house and my name shall be here, and I will manifest myself to my people in mercy in this house. Yea, I will appear unto my servants, and speak unto them with mine own voice, if my people will keep my commandments, and do not pollute this holy house.

Behold and see: The hearts of thousands and tens of thousands shall greatly rejoice in consequence of the blessings that shall be poured out and the endowment with which my servants will be endowed in this house. Behold, the fame of this house shall spread to foreign lands; and this is the beginning of the blessings I shall pour out upon my people. Even so. Amen.

As this vision closed, the Heavens were again opened to their view, and they saw and beheld, and were endowed with knowledge from the beginning of this creation to the ends thereof. And they were shown unspeakable things from the sealed record of Heaven, which man is not capable of making known, but must be revealed by the Powers of Heaven.

They beheld Michael, the archangel, Gabriel, and Raphael, and divers angels, from Michael or Adam down to the end of time, showing in turns their dispensations, their rights, their keys, their honors, their majesty and glory, and the Powers of their Priesthood; giving line upon line, precept upon precept; endowing them with knowledge, even here a little and there a little; holding forth hope for the work God was yet to perform, even the revelation of all things which are to come upon the earth until the return of the Lord in glory with His holy angels — to pour out judgment upon the world, and to reward the righteous.

And they were unable to take it in; therefore, they were commanded to pray and ask to comprehend by the power of the spirit, to bring all things to their remembrance, even the Record of Heaven which would abide in them. Amen and Amen.