"Behold ye, the people of this great city, and hearken unto my words; yea, hearken unto the words which the Lord saith; for behold, he saith that ye are cursed because of your riches, and also are your riches cursed because ye have set your hearts upon them. Yea, heavy destruction awaiteth this people, and it surely cometh unto this people, and nothing can save this people save it be repentance and faith on the Lord Jesus Christ."

And now it came to pass that Samuel, the Lamanite, did prophesy a great many more things which cannot be written.
-------------
Last Saturday, I took my family to hear a man who was born without arms or legs. While he was not up on a tower, he was up on the steps of Utah Capital that overlooks downtown Salt Lake. In my opinion, this disabled man reminded me of Samuel the Lamanite, the great prophet in the Book of Mormon.  For those who don't know much about Samuel, he was an unlikely prophet who cried repentance to a prosperous people living in the great city of Zarahemla. These people thought they were righteous and had built a magnificent Temple in the center of their city. However, they had set their hearts upon riches and had become prideful. Samuel cried repentance to this people to warn them of their pending destruction if they didn't turn from their wicked ways.
https://youtu.be/V8clCnqOyBU
Before hearing the man speak on the Utah Capital steps, I walked the around the Salt Lake Temple and multi billion dollar mall that The Church of Jesus Christ of Latter-day Saints have built adjacent to the Temple. In a few weeks on March 22, it will mark the 10 year anniversary of the dedication of  the City Creek Mall where the Prophet, President Monson and his two counselors as well as Utah's top government leaders chanted three times, "Let's go shopping". Here is a link to some of the photos I took of the event.
It is interesting that after ten years, the shopping mall is largely empty with few shoppers.  I can't help but think that the billions of dollars used by the Church to built this mall could have been spent helping to clothe the naked, feeding the poor, and helping the sick. I took this below photo of a man named David and his dog named Peedy. While he was grateful for the assistance I offered to him, he said it meant more to him that I would sit down with him and talk to him like a friend instead of garbage like most people do who pass him by. 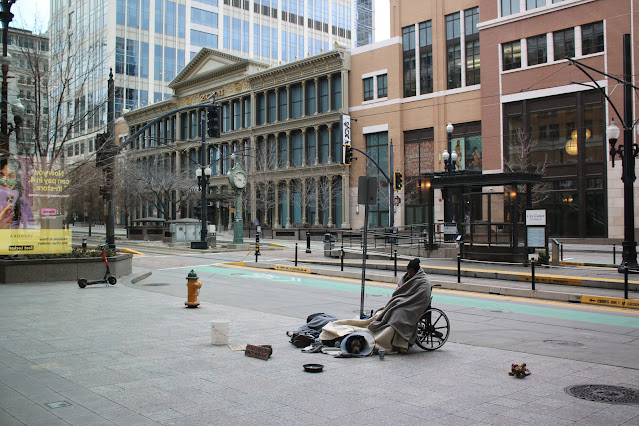 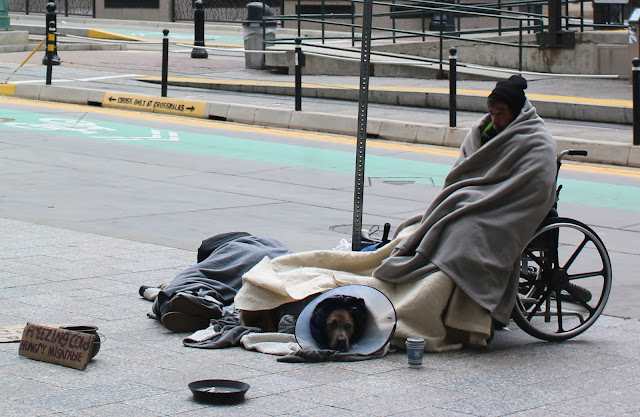 Sidenote:
President Russel M Nelson and his wife Wendy spoke on Sunday at a special meeting for all those who live in Europe. Sister Wendy spoke first. She shared the famous story about the Emperor's New Clothes and the importance of following her husband, the Prophet.

"Today I’d like to talk with you in Europe about truth and prophets. In the literary folk tale the emperor's new clothes by Danish author Hans Christian Anderson, swindlers convinced the emperor that the new attire they made for him is of the most exquisite pattern, material, and colors. They emphasize that anyone who cannot see the extraordinary clothing is unworthy of his office or simply stupid. Everyone is duped by the charlatans even the emperor's most trusted officials. All the town's people join in the chorus telling the emperor how magnificent he looks as he proudly parades in front of them. No one wants to be thought of as stupid. However, one child boldly proclaims the emperor has no clothes on and that was the truth. Today it can be difficult to know who speaks the truth, but my testimony is that prophets of god always speak the truth. While many in the world's great and spacious building convincingly profess that evil is good and good is evil. Prophets speak the truth....


And now how will your life be blessed as you choose to follow President Russell M Nelson the prophet of god on the earth today who for four years has led The Church of Jesus Christ of Latter-day Saints under the direction of Jesus Christ himself. I’m grateful that my husband is the kind of man who many years before he was called to be an apostle said quote, “I never ask myself when does the prophet speak as a prophet and when does he not. My interest has been how can I be more like him” end quote. As his wife, may I offer you several examples of president nelson's life that you may want to emulate."

To listen to the entire meeting. Here is the link where you can listen to the things in Presidents Nelson's life that  you should emulate in your life...

or we can read in our scriptures about the life of Christ and how we should emulate Him  like taking care ofthe sick and the afflicted, and the poor and the homeless.