Last week, a group of 24 of us hiked in the early morning hours to the top of Table Rock.  Table Rock is a mountain pillar located just south-east of downtown Boise, Idaho. This beautiful natural rock was sacred to the Northern Shoshone tribe, who used the high plateau as a ceremonial meeting place. In 1959, an illuminated 60 foot cross was erected that stands on top of Table Rock. The cross can be seen from the entire valley and serves as a beacon and a symbol of “faith, moral values and integrity” for those who live in Boise.

Shortly after midnight on June 30, 2016 a fire erupted on Table Rock burning everything around the entire mountain destroying over 2,500 acres. Below is photo and video of the fire. You can see how quickly the fire spread by watching the entire video. 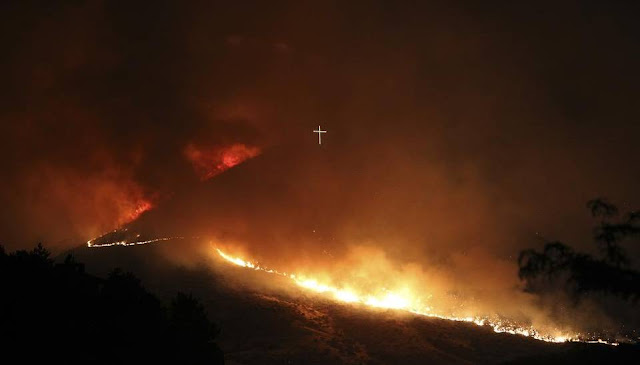 The trailhead begins at the Old Penitentiary, a historic jail that sits at base of the mountain. This prison held Idaho's most notorious criminals but is not longer in use. We meet there around 6:00 AM. and had prayer before we began our ascent. It was still very dark but we could see the illuminated cross as it glows brightly in the early morning hours before sunrise. 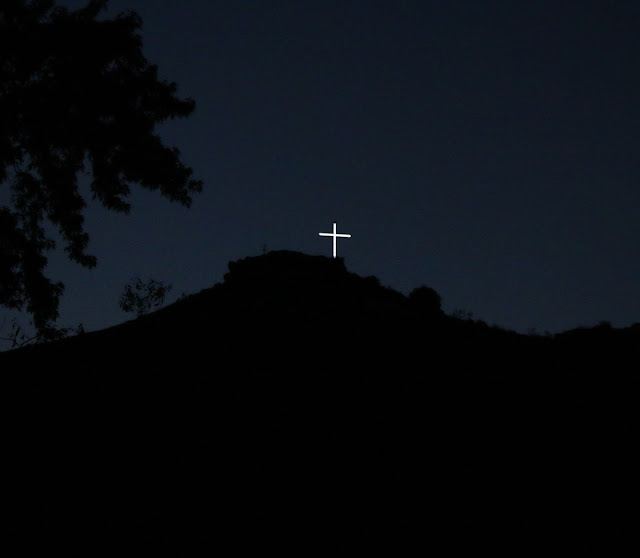 Before the sunrise, we reached the west end of Table Rock summit. We looked over the city as well as the graffiti which was previously left by others how have little respect for nature.  Instead of staying on the west side where the cross is located, we turned around and hiked to the opposite side of Table Rock to face the sun before it rose. There on the east end is a living tree that was not burned by the fire. We gathered together, prayed and sang hymns.

We waited individually for the sun to come up as a new day began. While it looked imminent that the sun was about to rise, it took longer than expected, but we patiently waited. 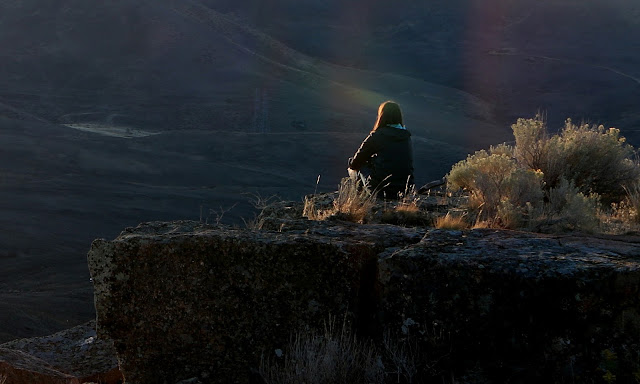 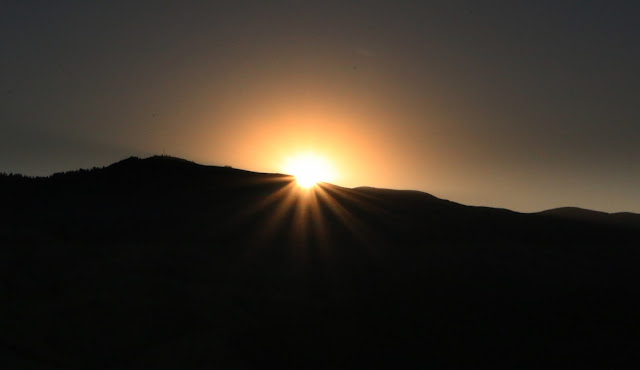 The sun in all it brilliance, warmth and glory rose from the dark and black mountains. I saw a large cottontail scurry past me, a reminder of rebirth, and a symbol of Easter when we observe the Risen Lord from the grave. It is no coincidence that on the west side (representing death, the world etc stand the 60 foot cross and on the east side was signs of new life, a beautiful living tree and a cottontail. 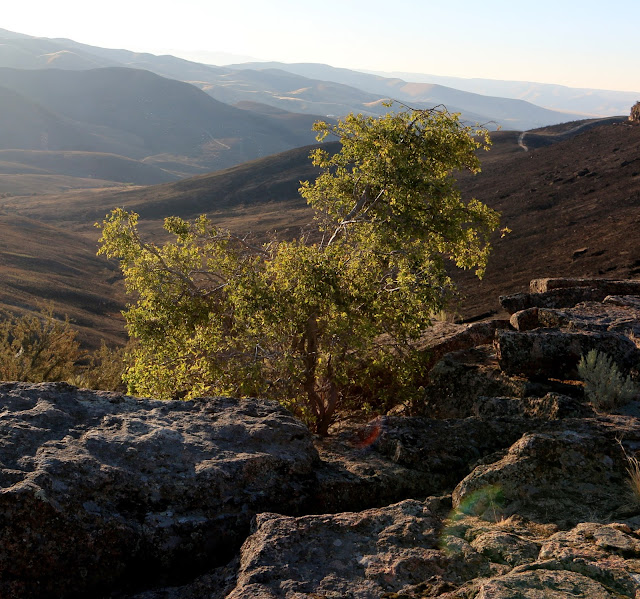 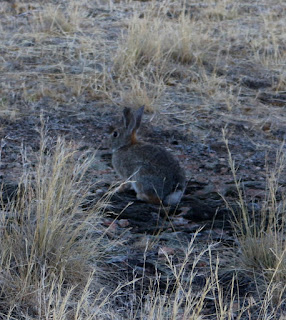 Descending the mountain with sun now up, we could see the burned and scorched trees and bushed. However, at the base of the once living plants, is new growth. Such is the cycle of life not only in the physical world but spiritually as well. 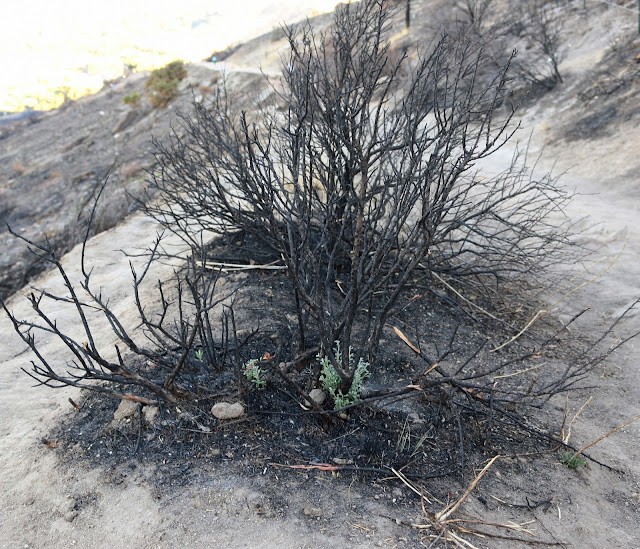 Additional Photos: The burned landscape around the Table Rock in Boise Idaho. 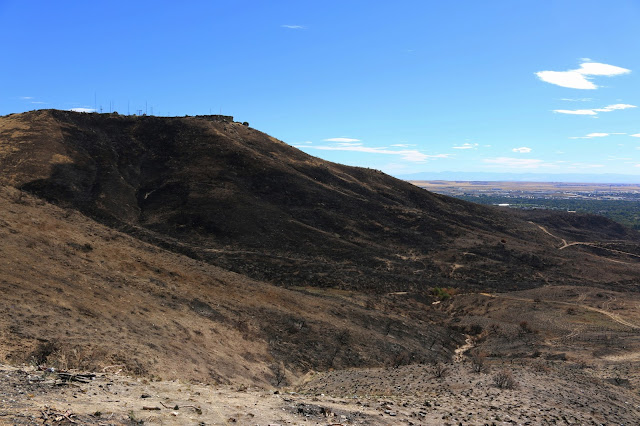 This is taken from within the Old Penitentiary Building. Despite it being a prison, they have tried to beautify the area. If you look close through the center window of the rock wall  you can see the cross on top of Table Rock. Below is a zoomed up photo. 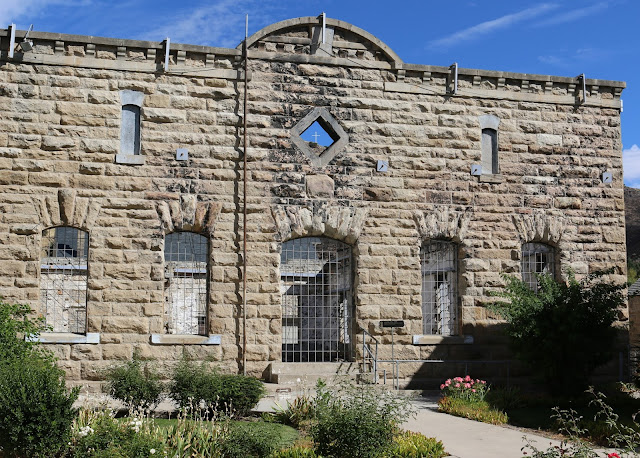 If you look closely, you can see people on top of Table Rock near the 60 foot cross. 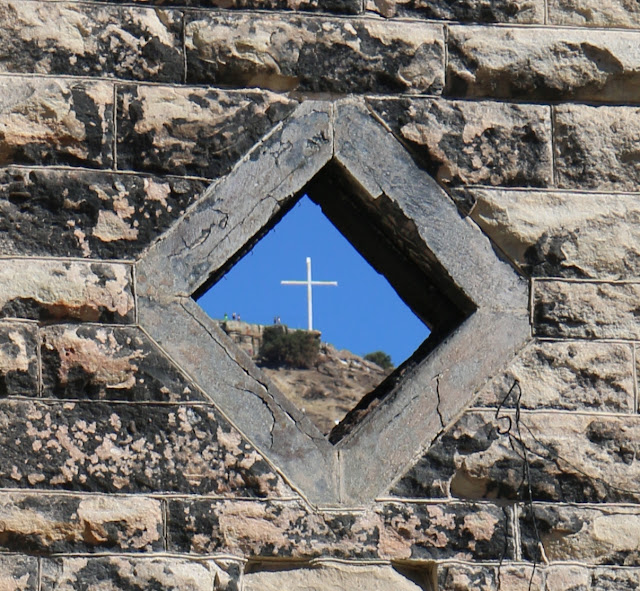 While these photos might not mean alot to others, it has alot of significance for me. I experienced them prior to a talk that was given that the speaker shared the following experience:


"I recently had a vision that began as a dream. In it I was traveling in a small car up a mountain road. The road was steep, but straight, and it grew steeper as it climbed upward. On the left side of the road there was a railroad track running parallel. As we drove the small car upward, I noticed a sharp bend in the railroad tracks ahead that interrupted the otherwise straight course of the line. I saw a train approaching from uphill in the distance coming downhill rapidly, and it seemed to be going far too fast to safely negotiate the sharp bend in the tracks. The small car we drove was not quite to the bend when the rushing train hit the bend, leapt from the tracks and violently crashed in front of us. Our little car narrowly escaped a collision, as the train’s wreckage spread about. As the small car continued upward, the train crash worsened, at first beside the car, and then as we accelerated, closely behind us. The little car got ahead of the continuing wreck of the moving train, and I could see the train was full of passengers who, uphill from the wreckage, were enjoying themselves. They were paying no attention to the disaster already befalling their train. We began to shout out the windows of our car, trying to warn the occupants in the doomed train, but they gave no heed. They laughed and partied aboard the train with no concern for their impending destruction. I could see the wreckage behind me in the mirror as the violence of the wreck threw shattered railcars about, some onto the road behind us, making the road now impassable. We  were powerless to save those aboard the train because they would not hear the warnings we shouted to them. As we reached the top of the mountain, the last of the train went by, and I stopped the little car. We got out and stood in the roadway looking down the mountain and watched as the last of the train was destroyed. While mourning over the many lives that had been lost, I awoke from the dream and sat up on my bed, but the vision continued. I next saw in the distance, beyond the wreckage, an overpowering flood, as if it was a great fire, consuming and destroying all the country coming from the east. Although we had survived the train wreck, it appeared certain we would all be killed in the coming flood. I looked about for any sign of hope we might survive, and noticed beside the roadway a great rock with an opening. I led the small party to the rock and discovered the opening was for a cavern that went upward within the shelter of the rock. We entered the cave, and climbed upward. Inside the cavity of the rock, our small group waited as the flood approached, unsure whether we would live or die. The noise of the destruction outside was deafening as the flood approached, and then the opening of the cavern went black and we were left in complete silence and darkness. We waited. In a few moments the light returned but silence remained. After a few more moments our small group emerged from the rock’s cavern to see what had transpired with the world. The scene of destruction was astounding. The entire landscape was transformed. It was destroyed. The wrecked train, the tracks and the road had all been consumed. Everything appeared barren. Then suddenly new life began to spring forth in the widespread desolation. Barren trunks brought out new limbs, blossoms and leaves. Flowers sprang from the earth. As we watched, the earth was quickly transformed, and in a short time the denuded desolation was full of life, beauty and fertility much greater than before the flood of  fire had destroyed the landscape."
...............................................................

I experience and saw the remains of an all encompassing fire, I climbed to the top of mountain. I saw through a small opening of a rock area the symbol of Christ. I saw the barren trunk of trees bringing  forth new life. I was amazing to not only hear the above dream/vision on Sunday. but to personally see and experience alot of these important symbols on this hike the day before.

Sidenote Addendum :
Within a month of the iconic Table Rock mountain in Boise catching on fire,
Ensign Peak in Salt Lake City which is our iconic mountain also caught on fire. I find it interesting that both cities with iconic and religious  monuments at top would both burn in the same summer all within about a month of each other.