continued from Part I Notes taken from Elder Richard G Scott talk given on
May 17, 1992 Layton Northridge Stake Priesthood Meeting

Elder Scott then quotes D&C 123: 12-17 where it says that we must bring to light the hidden things of darkness (which the footnote says is secret combinations) and he emphasized that point saying that he did not have the time to go into that subject now, that it would take over two hours alone, but he said, "Brethren, I want you to go home and study D&C 123 diligently until you understand completely what is means and how it affects your life."

Then he drew an axis on the black board as shown here: 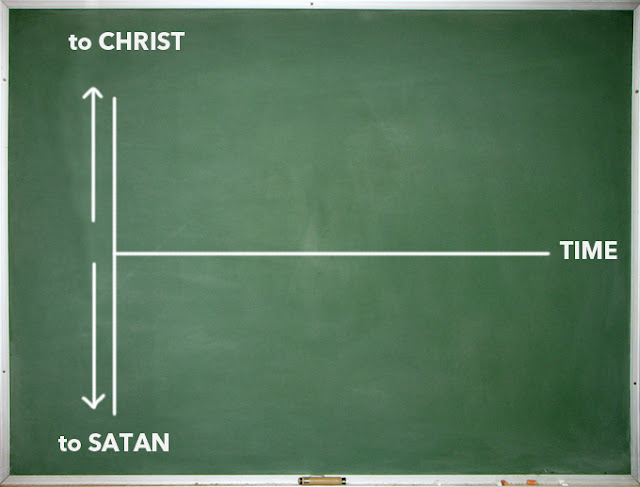 He then asked, "If Up is a course toward God, then which way is the world headed?" Everyone agreed that it is on a sharp logarithimic curve downward. Then he asked, "Which way are most members of the Church headed?" One brother tried to say that maybe we are not making a lot of progress upward, but just wavering between God and Satan so it ends up being a wavy line straight forward. Elder Scott said he did  not believe that was the case with most members, maybe a few. He siad that there are a few humble followers of Christ who are ona course back to God and making a curve of progress as shown below, but that he believed that most members are so concerned with being part of the world and being acceptable to the world that they are on a course of downward drift liek the world but maybe not as drastic a downturn. He pointed out how we accept so much wickedness that we would not have accepted twenty years or so ago (through our exposure to TV, movies, and Music) and even many of the Saints are partaking of that wickedness, thinking that it is just part of being here). 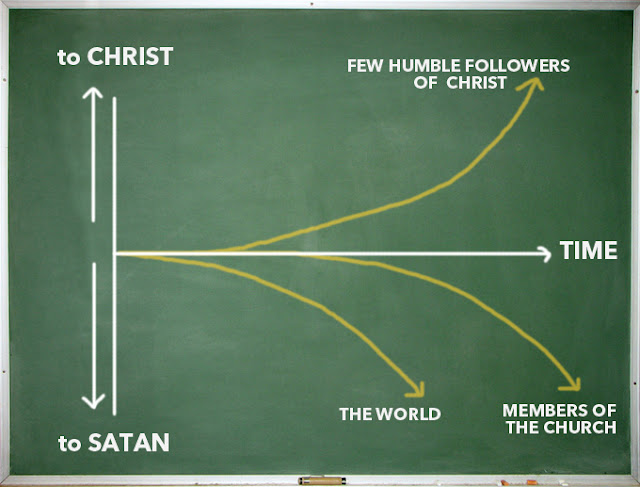 He said that one of the MOST serious downward trends is that of mothers working outside the home contrary to the inspired counsel of President Benson. He said he know that there are some mothers who have to word as single mothers or because fathers cannot, due to health problems etc. and he understands how hard it is to make ends meet in this wicked society. He said he feels that most working mothers do so because couples have coveted worldly good so much that they either go into debt and have to send the mother to work to pay for things they want, or instead of curbing their desires or selling what they cannot pay for. they rationalize that the wife can just until the goods are paid for and they they see more and more things they want to buy. Then luxuries become necessities and we thing we can't get by without them, such as having two cars.
Posted by BARE RECORD OF TRUTH at 12:59 PM 21 comments: