215: FOUR BLOOD MOONS and the MAN IN THE MOON 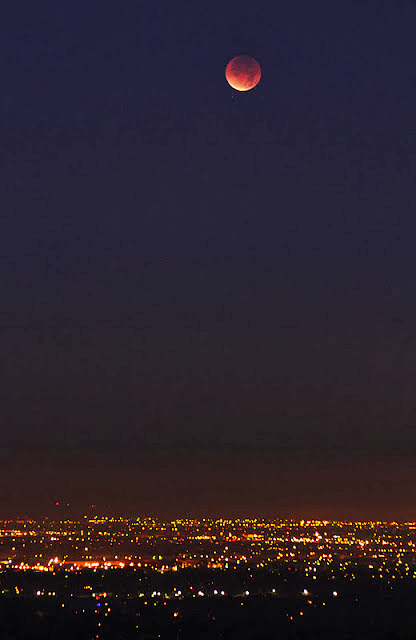 This photo was taken of a lunar Eclipse over the Salt Lake Valley that occurred in December of 2011. A lunar eclipse occurs when the moon passes directly behind the Earth into its shadow (umbra). This can occur only at night when the Full Moon, the Sun, and the Earth are directly aligned , with the Earth in the middle.  Because total lunar eclipses often appear red, people sometimes call a totally eclipsed moon a “blood moon.” 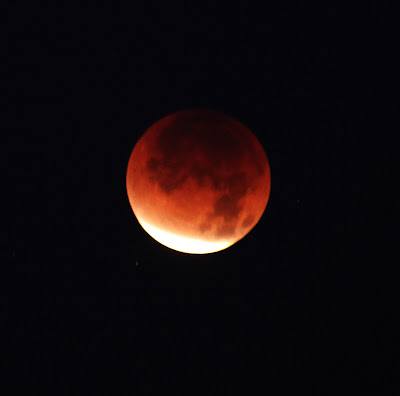 Starting next spring in 2014 there will be 4 blood moons. While that is not necessary really rare.. the fact that these four blood moons will occur on significant Jewish holy days is not only rare, but significant. The first blood moon will be on Passover on April 15, 2014. There will be another blood moon on the following year on Passover which will be April 4, 2015. The other Jewish Holy Day is the Feast of Tabernacles which is  Oct. 8, 2014. On this day as well, there will be a Blood Moon Eclipse.. and then the following Feast of Tabernacle on Sept. 28, 2015 will be the 4th Blood Moon.

Lunar eclipses occuring on these holy days is a rare occurrence in the history of the world,  and each time they were linked to significant events. For example, four PARTIAL lunar eclipses occurred on the Jewish Passover in 32 AD – 33 AD and the "Feast of Tabernacles" in the years before and after the Crucifixion of  Jesus Christ. Four TOTAL lunar eclipses occurred on the Jewish Passover and Feast of Tabernacles in 162 - 163 AD, coinciding with the worst persecution of Jews… and Christians in the history of the Roman Empire. Not to mention within 3 years the Antonine Plague killed eight million people, a third of the population.

For more information about these signs in the heavens, here is an interview with a Pastor John Hagee who has written a book called the "Four Blood Moons: Something is about to Change."

Not mentioned in the link, as a precursor to the four blood moons, there are four comets that have entered our solar system this year and have and will loop around the Sun, ISON being the last. Here is a LINK.

Furthermore, what I find really interesting is that after the first two blood moon in 2014, there will be a total solar eclipse on March 20, 2015. This solar eclipse happens to fall on the 2015 Spring Equinox.

Signs in the Heavens?  I think the Lord uses any and all ways to communicate to those who have eyes to see and ears to hear.
.....

Sidenote:  My brother pointed out to me a few months ago the image of the Man in the Moon. Historically, The Man in the Moon refers to any of several pareidolia images of a human face, head or body that certain traditions recognize in the disc of the full moon. The images are usually composed of the dark areas of the lunar "seas" and the lighter "highlands" of the lunar surface. For those who might have a difficulty seeing the "man in the moon", I superimposed the man's face on the two right images below. The left image is the actually moon, and the far right is the image of the profile of a Greek man.

The moon and circle has always been a symbol of woman. The sun and the square is the symbol of man. Union of both male and female results in creation. Godhood is all about creation. If you combine a symbol of the man with the symbol of the woman (as in the man in the moon with the actual moon which is symbolic of the woman.. it is symbolic of creation. They are one. For eyes that can see, in ceremonial clothing the man places a round article (symbolic female shape)  on top of his head. The woman places an object that when laid flat is the shape of a square  (male symbolic shape). Union and balance of the male and female. In addition, this represents the importance of the dyad.. the union and oneness of man and woman, husband and wife, Father and Mother, male and female.