313: THE SUSTAINING OF CHURCH OFFICERS

In the April 1979 General Conference, the vote of Church Officers consisted of  sustaining 16 men as prophets, seers and revelators. The Patriarch to the Church, Eldred Smith was always sustained as a prophet, seer and revelator along with the First Presidency and the Quorum of the Twelve. I came across this calendar that was given to members prior to Conference. It states, "As you listen to or watch general conference with your family, see if you can identify each General Authority who speaks by referring to the photographs on this calendar page." 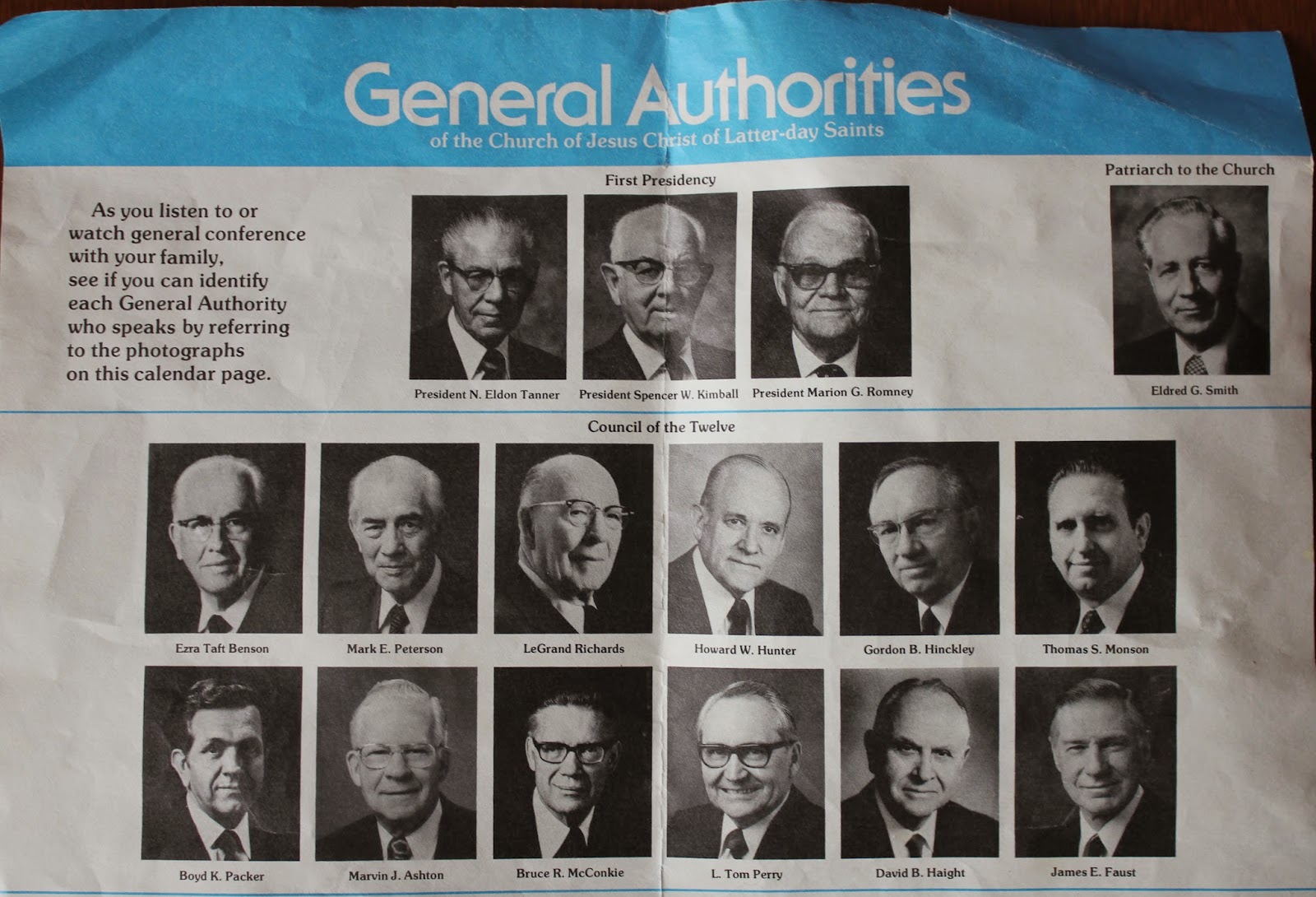 That was the last General Conference that Eldred was sustained as a prophet, seer and revelator. In October of 1979, Eldred Smith was "honorably relieved of all duties and responsibilities pertaining to the office of the Patriarch".
Here is the transcript of the sustaining vote:

It is proposed that we sustain as President of the Council of the Twelve, Elder Ezra Taft Benson. All in favor, please manifest it. Contrary, if there be any, by the same sign.

The counselors in the First Presidency and the Twelve Apostles as prophets, seers, and revelators. All in favor, please manifest it. Contrary, if there be any, by the same sign.

Spencer W. Kimball as trustee-in-trust for The Church of Jesus Christ of Latter-day Saints. All in favor, please manifest it. Contrary, if there be any, by the same sign.

As Patriarch Emeritus, Eldred G. Smith. All in favor, please manifest it. Contrary, if there be any, by the same sign.


The following year in the October 1980 General Conference, an interesting thing happened. There were some in the Tabernacle who did not raise their hands to sustain President Kimball, but opposed using the same sign. Here is the transcript.

"It is proposed that we sustain President Spencer W. Kimball as prophet, seer, and revelator, and President of The Church of Jesus Christ of Latter-day Saints. All in favor, please manifest it. Contrary, by the same sign.

[A call of “no” from several in the congregation]

Elder McConkie: President Romney, it appears that there are three negative votes. This is to advise those so voting that they may meet with Elder Gordon B. Hinckley of the Council of the Twelve following this session. Thank you.

President Romney: Thank you."
Elder McConkie continued to read the rest of the sustaining for the remaining Church officers, and then said. "It seems, President Kimball, that the voting has been unanimous, with the exceptions already noted, in favor of these officers and the General Authorities."

What is really interesting, that after there were votes of dissent in that conference, the next SEVEN conferences the sustaining votes did not name President Kimball, nor his counselors, nor the Quorum of the Twelve... but only a vote for those who were newly called or released,.. This is how the sustaining was read:

"With the exception of these brethren whom we have just sustained, there have been no other changes is the General Authorities since the last conference. It is proposed, therefore, that we sustain all of the General Authorities and general officers of the Church as at present constituted. Those in favor please manifest it. Those opposed by the same sign. Thank you."

Tomorrow there will be another sustaining vote most likely in the Saturday Afternoon session. I know that there has been alot of concerns of the current leadership lately. Local Bishops and Stake Presidents have disciplined members for not sustaining the Brethren. To combat the problem that have found ways to help their congregations understand the importance for doing so.. including wearing button that say I Choose as written on this blog. Or including quotes in the Sacrament Meeting Program. Below is a the backside of the Sacrament Program from a ward in our area. 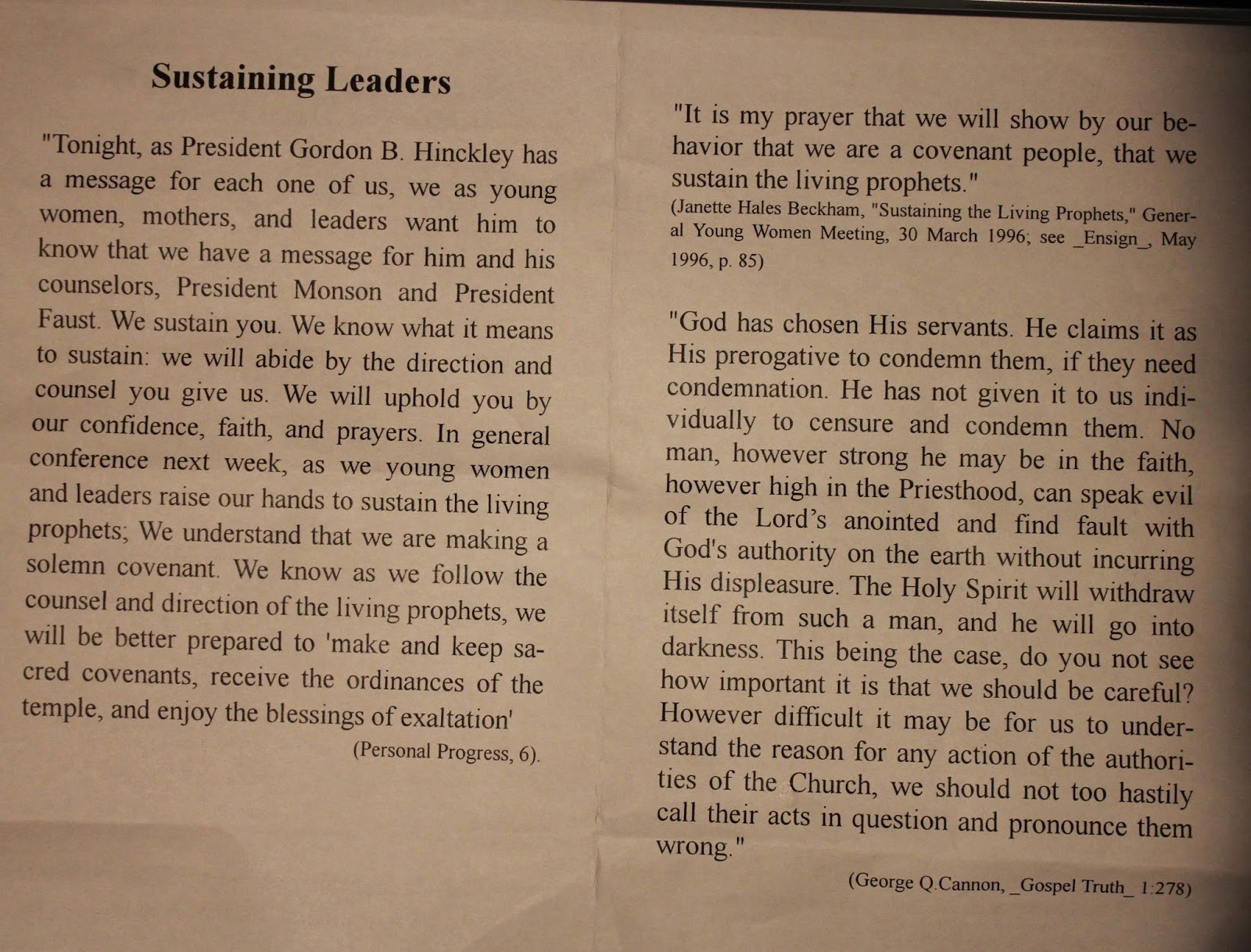 Whether you choose to sustain, or to oppose or avoid voting all together in the Saturday Afternoon Session of Conference... use your agency and vote your conscious. While the votes might not be written down here on earth, or even noticed.. I think it is noticed in Heaven.
.................
Posted by BARE RECORD OF TRUTH at 10:12 AM 3 comments: