"And Enoch continued his preaching in righteousness unto the people of God.
And it came to pass in his days, that he built a city that was called the City of Holiness,
even Zion."
Moses 7:19
...
"When the Lord shall build up Zion, he shall appear in his glory."
Psalms 102: 16
... 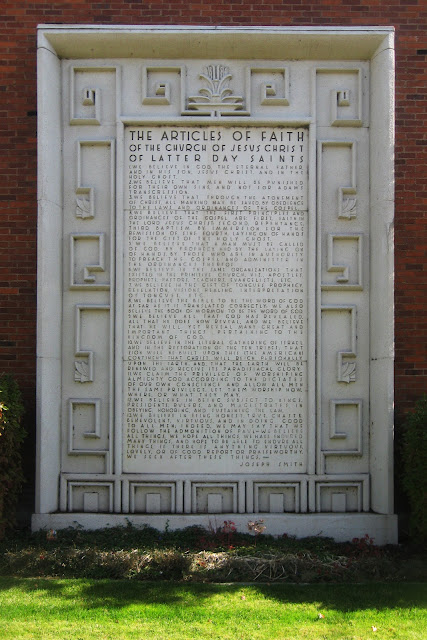 I attended church in Oregon last Sunday. This chapel is one of two buildings in the world that has all of the Articles of Faith carved out on the front of the building. Below is a zoomed up and cropped photo highlighting four words from the tenth article of Faith, "we believe that Zion will be built upon the American continent."

Yes, Zion will be built. However, Zion cannot be built up unless it is by the principles of the law of the celestial kingdom; otherwise I cannot receive her unto myself. Doctrine and Covenants 105:5. What are those principles? Unfortunately the current track we are on will eventually provoke the judgements of God. However, there is nothing to fear if we are individually in the right way. In the meantime, we are here to serve, with meekness, our fellow Saints. There is absolutely nothing which prevents us from going about doing good, just at the Master did.

Here are a couple of things to think about when we start to see unrest and civil disorder come upon our land.  The scriptures also describe Zion to be in the mountains, not in the valleys. Possibly one of the reasons why the city of Zion is on high ground is that the “wicked” are at a disadvantage if they decide to attack. Violence is hard to draw back in once it is started. The wicked slay the wicked, and if we start killing people, we become the “wicked.” Some come to like the killing, they become twisted in their violence and defense and this is actually a RISK to the purity of Zion.

So, the protection of Zion will be the Priesthood and Nature-not Force.

Here is an interesting thing I saw this weekend as I was driving along side the freeway in Oregon. I felt impressed to pull my car over. I looked over to my left and saw 3 large bird flying next to me.  I pulled out my camera and took some photos. I saw one of the birds start to fly higher and away from the two lower birds. Then all of a sudden the two lower birds began attacking each other. It seemed eerie to see these two birds fighting in midair. It appeared they both were hurt and then landed to the ground.