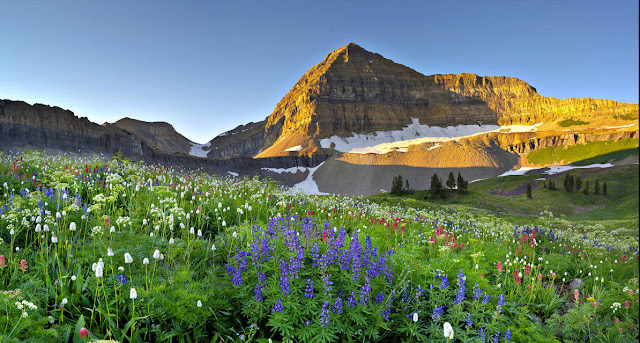 SEVEN days from now, it will be the Summer Solstice. In the Northern Hemisphere, the Sun is higher in the sky throughout this day, and its rays strike Earth at a more direct angle, creating more sunlight on this day then any other. In North America, summer solstice begins on June 21, 2013 at 1:04 A.M. EDT

As a major celestial event, the Summer Solstice results in the longest day and the shortest night of the year. Sol + stice derives from a combination of Latin words meaning sol = "sun" and stice =  "to stand still." It is said that  the sun rises higher and higher until it seems to stand still in the sky.

Above is a photo of Mount Timpanogos. It is the second highest mountain in Utah's Wasatch Range and the 47th most prominent mountain in the United States. The name translates as "rock" (tumpi) and "water mouth" or "canyon" (panogos). It would make for the perfect hike to ascend on the Summer Solstice.

A wise friend of mine said:

"Observing the Vernal, Autumnal and Solstices was something done from ancient times, in ceremony and in ritual. Whole cities were built aligned to the cardinal directions of the compass and the lights of heaven. The lights of heaven were given to us first as “signs” and secondly as “seasons.” Don’t let them pass by unnoticed. Otherwise you note less than even the plants and the animals whose life cycles and behavior acknowledge the passing of such events.

"Nature testifies endlessly of the Lord. It also invites us endlessly to turn back to Him. This continuing patience and enduring invitiation shown in nature is a reminder of how loving and patient, how persistent and committed the Lord is to our salvation. Salvation is predicated upon the same, universal standard for all who would return to Him. In that respect it is as exact and unchanging as the cycles of nature. Despite its exacting requirements, it is endlessly inviting and continually encouraging us to accept that standard and to live it. Not just to say, but to do."

"In this world, we are always in motion. Always either growing or receding in light."

"So also with the sun. From solstice to equinox, to solstice to equinox, it grows, then dims. Never static. It is impossible to freeze the light. It will grow or it will fade, It is not possible for an individual, nor a collection of individuals, to remain static. They are either involved with restoring truth or in apostasy from it; never merely "preserving". All great truths are simple, and they are testified of in nature as well as in scripture."

It would be good to plan accordingly if you intend to do something, then, to show Him that you want to return to the Light. The Summer Solstice is a symbolic day to be in more direct alignment and a day of "most light".