Last weekend, I watched my daughter perform at her Spring Ice Show.  She skates on a synchronized ice skating team. . There are 18 of them on the team, all under the age of 12. They all try and stay together in unison despite being different heights and builds. It is fun to watch them practice their skills in an unforgiving sport performed on ice. They glide, turn, dance, and spin. One of the more interesting things to watch is the forming of a large spinning wheel. 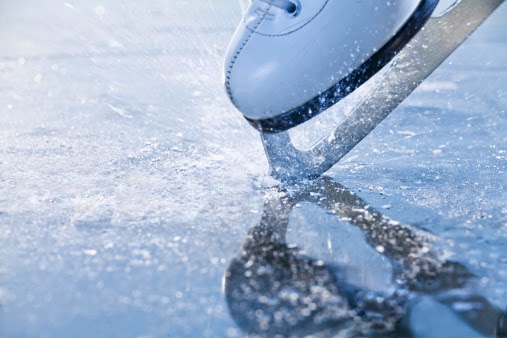 In order to form a spinning wheel in synchronized skating, one of the skaters plants her toe pick deep into the ice to secure her skate so it will not move and become an anchor. It becomes the fixed and immovable point were all the skaters have a sure place of origin to spin from. Every skater must rotate around this common center point. As the skaters begin to link their hands together in an spin, the middle person basically stands unmovable while the other skates begin to rotate around quite fast.. The very outer skaters get whipped around really fast. The farther you are away from the center, the faster and faster you will spin.. It is easy to fall and hard to hold on when you are on the outer parts of the wheel. 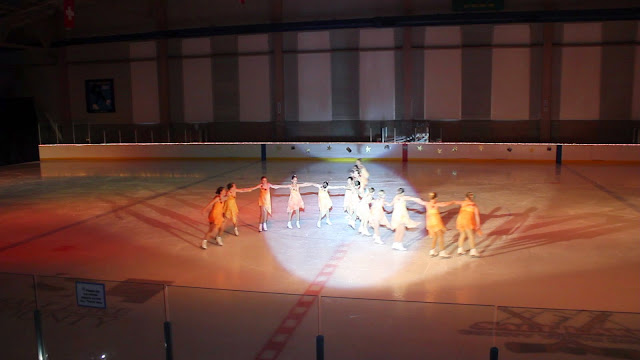 I have thought about this metaphor that past couple of days. If only we can rely and hold onto Christ as that center anchor in our lives.

In reading recently Joseph Smiths' history, I think we are so similar to the revivals at during Joseph Smith time. He said... “and great multitudes united themselves to the different religious parties, which created no small stir and division amongst the people, some crying, “Lo, here!” and others, “Lo, there!”

We have been given advice in when we read in Matthew 24 that in the last days… “Then if any man shall say unto you, Lo, here is Christ, or there; believe it not. For there shall arise false Christs, and false prophets, and shall shew great signs and wonders; insomuch that, if it were possible, they shall deceive the very elect.”

There is only ONE.. and just like in the example of the ice skating metaphor, there is One who stands in the center who we need to connect to and that is Jesus Christ. Without a tight grip on Him we could find ourselves spinning out of control.... or participating in circles that it might not be wise to do so.

A division has begun. On one hand you have people steeped in tradition, closed minded. and slow to learn anything new especially if it doesn't come form the mouths of our current living leaders. On the other you have almost too open minded people who will believe in just about anything spiritual without using much discernment.  Various groups are forming, not unlike what we read in the Book of Mormon when there were divisions among the people.

Just like when someone is hungry for food, they will do anything to feed their mouths and will eat just about anything. When someone is spiritually hungry they too will do anything as well. They will believe in doctrines that resembles light and truth even though much could be full of deception. I have many well meaning friends who participate in all kinds of gatherings currently taking place attending gatherings, reunions, symposiums, conventions, retreats, lectures, trainings, and classes.

Enthusiasm for spiritual knowledge can lead to impatience. Impatience causes those who ought to await direction from the Lord to charge ahead and be destroyed.

But it is better for the impatient to be drawn away than gather to destroy the work of God.

A strait and narrow way will be found by only few. To find it the few will confront dozens of voices imploring them to diverge from what God has underway crying “Lo, Here!” and “Lo, There!” It is required for the few to reject false offers of salvation, purported higher knowledge, pacifying doctrines, flattery and errors coming from teachers who command people to hearken to their precepts.

How the Lord can accomplish His work in this fallen place will be a wonder to behold. None in this generation seem to have the patience to allow Him to do as He has promised.
If we try and move ahead in front the Lord, we actually are working against him. wo, to those who really thing they speak on behalf of the Lord, but have either been deceived and are taking the Lord's name in vain.

Yes, doubt everything other than truth taken from the scriptures. They are the standard by which all things should be measured

Because this generation does not understand their precarious situation, they are unable to repent. But it is only repentance which can save some few souls. People are so quickly and easily drawn away from the challenge to repent before God into some other vain and foolish track. That is necessary, however, because in Joseph's day we failed in Kirtland, failed again in Missouri, failed in Nauvoo and then lost Joseph. In Brigham's day we failed in Salt Lake. The effort to save great numbers has not and will not work. There have always been comparatively few who have the patience and devotion to allow the Lord to do His work. Men and women charge into the upward pass and are slain by the beast who guards the way generation after generation, while God works patiently to save some few. In the meantime, if great numbers can be persuaded to wander off or charge impatiently, then so be it. Had they remained, they would have spoiled what lies at the top of the mountain. It is better, therefore, that they be taken in their vanity than to bring it with them into a society where such things would be ruinous.

Given the vanity and pride of mankind, it seems unlikely there will ever be people who are willing to strictly observe only what He asks as He asks it. It is a mistake to think we can improve on what He gives us, and yet we do.

Vanity, pride, looking beyond the mark, self-will, arrogance, and reckless enthusiasm all proceed from a lack of gratitude to God for what He gives us. Instead of accepting in gratitude and practicing it with patience, we demand more, insist we can improve on His ways, and charge ahead into the pass to be destroyed by the beast. The chosen of God remain scatterlings, unable to dwell in the House of God with Him, because it cannot be built with the unclean hands of a wayward generation.

We have moved into a season of increasing light now. But I do not think mankind has yet reached its winter solstice. From all I have seen, darkness continues to hold sway among even the very elect.