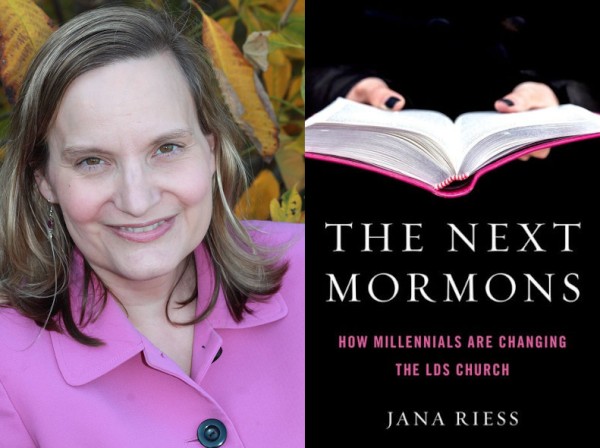 A new book written by Jana Riess was released this week. It is called: The Next Mormons: How Millennials Are Changing the LDS Church.  I attended a Q&A with her during a book signing at Benchmark books on Wednesday night.  It was recorded and you can watch the video here:

I asked her with all that she learned from the data and research from writing the book,  what are a few recommendations that she would you make to the Church to fix some of the problems.  She said as part of her answer, "We have elevated to sanctity, the idea that the Church should be the same everywhere. Why do we think uniformity is Gospel. It makes no sense to me."  She suggested that there needs to be more local autonomy and to let wards be different from each other.

Many good questions were asked and I am sure many of the Church leaders are aware of her book and the data she has gathered. She might be ruffling some feathers especially now from her recent column on Religion News Service. She wrote that she will continue to use the word Mormon and LDS as a columnist. (I think she should be nicknamed Rebel Riess.) However, she makes some really good points.

Here are some excerpts from the article: Why journalists will keep using the word "Mormon"

"As a member of the Church of Jesus Christ of Latter-day Saints, I’m happy to avoid using the word “Mormon” at church, at home, and in my family. I can easily try to substitute “I’m a member of the Church of Jesus Christ of Latter-day Saints” for “I’m a Mormon” in my personal conversations and church lessons.As a columnist for Religion News Service, however, I will continue using “Mormon” in headlines, articles, and columns. I will also continue using “LDS” as shorthand after using the church’s full name upon first reference to it as an institution. This is the style guide established by the Associated Press, which RNS and most other media outlets follow. It’s not just because the AP sets the rules that RNS will continue using “Mormon.” It’s also because the AP style guide makes more sense than what the church is asking reporters to do.The church wants to emphasize the name of Jesus Christ. As the Newsroom announcement put it, “the invitation to use the full name of the Church is an opportunity for Latter-day Saints to refocus their lives on the living Christ.” That’s wonderful, but Mormons’ spiritual development as disciples of Christ has nothing to do with how journalists do their jobs. Members of the media do not have a mandate to emphasize the name of Jesus Christ in the course of doing their 9 to 5 jobs just because one denomination has told its members to do so.
It is not journalists’ job to adjudicate faith claims. Built into the request to use the full name of the church is a claim to theological superiority: this is “The” church of Jesus Christ. (The church’s style guide in fact requests that the first letter of the definite article be capitalized.) But if a church’s full official name includes a theological claim, it’s not journalists’ responsibility to affirm or deny it. For example, the world’s largest denomination is officially called the Holy Roman Catholic Church, but journalists call it the Roman Catholic Church. Whether it’s headquartered in Rome is a fact journalists can verify. Whether it is holy is way beyond our pay grade.