46: DIVIDED INTO CLASSES and BUILDING TO GET GAIN

I think one of the most beautiful, but also tragic accounts in The Book of Mormon is found in Fourth Nephi. It covers many generations in just a few verses. It covers both ends of the spectrum from a righteous generation to a wicked generation, from a Zion society to Babylon. It is the history how a people and their posterity who saw and were ministered to by the Lord became corrupt and eventually were destroyed. One of the first signs of decay was pride, the wearing of costly apparel, being divided into classes, and building up to get gain.

"And now, in this two hundred and first year there began to be among them those who were lifted up in pride, such as the wearing of costly apparel, and all manner of fine pearls, and of the fine things of the world. And from that time forth they did have their goods and their substance no more common among them. And they began to be divided into classes; and they began to build up churches unto themselves to get gain, and began to deny the true church of Christ."

Their downfall...they began to be divided into classes and built to get gain. 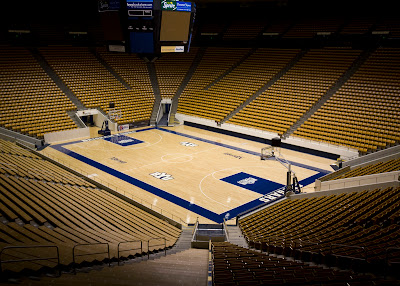 Above is a photo of the Marriott Center at BYU. Not only does this venue provide a place for athletic events, but it also converts into a religious center for Devotionals, General Priesthood Sessions and Graduation Ceremonies.

It was announced last Friday that this building will now undergo renovations. A select number of padded courtside seats will be built where the current student section is. Unfortunately now for the BYU students, they will longer be able to watch the athletic events courtside but will now have to sit behind the baskets.  As reported in the KSL news article, the new premiere seats will be sold for the purpose of making more money. These new padded seats will more than likely be reserved for distinguished guests at other functions as well. It seems to be a division of classes. The purpose is to make money.

Quoting from the KSL article:

"There are many reasons why this decision was made. Some of it was financial and some of it was strategy. Financially, BYU will be able to make more money off of blue padded seats that will replace the north side benches. Strategically, having the students behind the west basket will put them by the visiting team's bench and behind the visiting team's basket in the second half."

"As you can imagine, not all of the students are thrilled about losing a pretty primo seat to watch a BYU basketball game. I completely understand where the students are coming from. They have been sitting center court forever and look at a move to the end zones as a demotion. To me it's not a demotion, its smart business."

"However, by doing this it will allow BYU to take advantage of some financial opportunities"