I found it interesting to see the headlines of all the major newpapers who reported about the 100 BILLION dollars (+plus) fund that the LDS Church has amassed.  Here are some examples from The  Wall Street Journal, Newsweek, The Washington Post, and our local Salt Lake Tribune. Then look as the positive spin on the same story in the headline from the Deseret News. 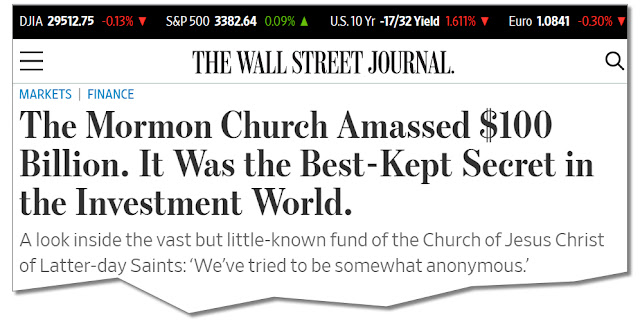 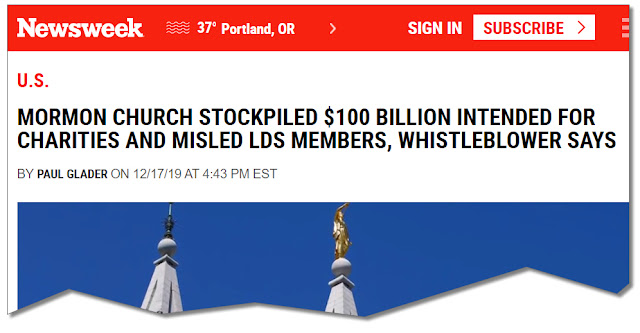 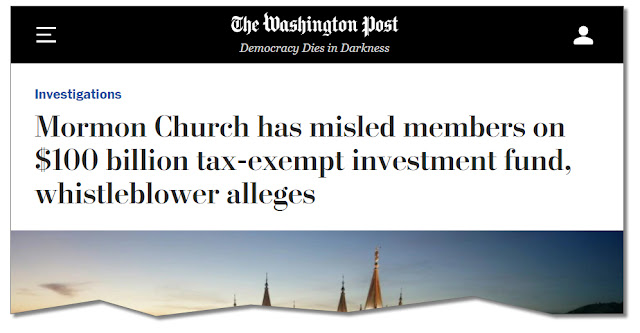 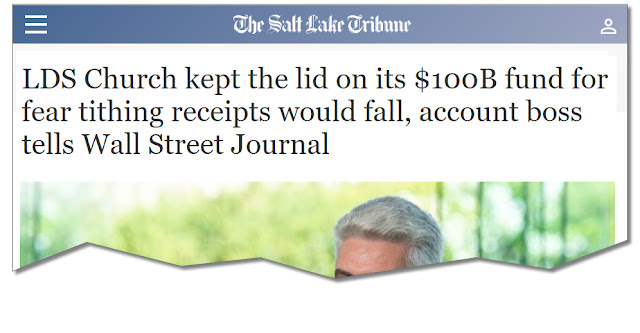 
Here was the headline in the Deseret News this week about the same story. 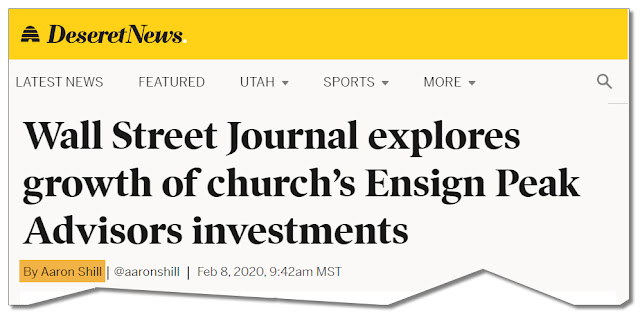 What is really ironic is the name of the Deseret News reporter who wrote this article for the paper. His last name is Shill. Not sure that is his pen name or his real name, either way, he might want to consider a new "pen" name. Shill is probably the worst name you could have as full time writer for the Church. The definition of "Shill" is not necessarily positive.

With headlines in all the major national newspapers, no wonder the Church wants/needs to own their own media channels to soften the negative news that has been dominating the headlines. In public relations and politics, spin is a form of propaganda, achieved through knowingly providing a biased interpretation of an event or campaigning to influence public opinion about some organization or public figure. 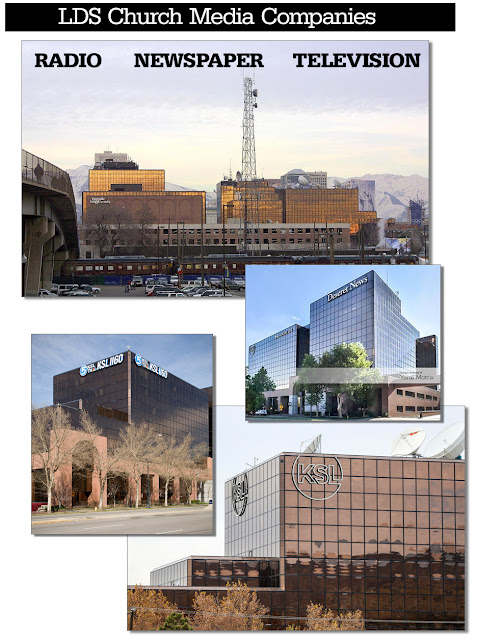 Another company the Church own is  Deseret Digital Media which operates the Web sites of other Deseret Media Companies media companies, including deseretnews.com and ksl.com.


Sidenote:
On Monday February 10th 2020, the Wall Street Journal, released a exclusive interview with Mormon Leaders regarding the Faith's amassed 100 Billion Plus in investments.

LINK TO THE Wall Street Journal's audio -
Here is one person's opinion posted publically in a comments section:

In multiple responses to having a secret $124+ Billion dollar cash fund, the LDS Church has stated how sacred their responsibility is to care for the widow's mite. Invariably, when tithing comes up in LDS context, the story of the widow's mite is trotted out.

Being raised in the LDS Church, I remember frequently being taught about the widow's mite. The context in which Church lesson manuals address the widow's mite (from Primary to Come Follow Me manuals), is all about her sacrifice and how we should always pay an honest tithe, even in our extreme poverty.

From the current Primary (children's) manual: "There are people who say they cannot afford to pay tithing because their incomes are small. … No one is ever too poor to pay tithing” (The Teachings of Spencer W. Kimball, p. 212).

The problem is this is almost 180 degrees removed from what Christ is actually teaching in this exact story. The passage is a direct condemnation of (1) the rich giving a fraction of their wealth to the church and (2) allowing a widow in their midst to give her last pennies to the church.

The story is not just Mark 12: 41-44. The immediately preceding verses are:

38 ¶ And he said unto them in his doctrine, Beware of the scribes, which love to go in long clothing, and love salutations in the marketplaces,
39 And the chief seats in the synagogues, and the uppermost rooms at feasts:
40 Which devour widows’ houses, and for a pretense make long prayers: these shall receive greater damnation

Literally, the immediately preceding verse talks about the church leaders "devouring widow's houses" and receiving greater damnation. Yet every LDS Church lesson manual I can find blows past verse 40 and only addresses 41-44. Every reference to the widow's mite is an expectation and demand that impoverished members pay their tithing regardless.

What is not spoken of is that a poor member's Temple Recommend is also tied directly to paying your tithing. So when Alma speaks of the poor being cast out of the synagogues, this is literally the case in the LDS Church today. If you don't pay your tithing, you are not worthy of a recommend - which means all your temple blessings, your eternal family, and promises of the Celestial Kingdom are gone.

So, when the LDS Church invokes the widow's mite in context of their $124 Billion Dollar rainy day fund, it makes me furious. To think that "devouring widow's houses" (verse 40) to add to your secret/sacred fund is in any way endorsed by what Christ is saying here is an absolute desecration of the text and the message

If anything, the Biblical text of the widow's mite, including the condemnation of the rich and the scribes (the church leaders), condemns the LDS Church both in demanding money from the impoverished faithful, and condemnation for not using that money to raise that same widow out of her poverty.

And to repeat, ad nauseam, that Christ taught this in the widow's mite story, is morally wrong.


And this just in.. a new Deseret News article for more damage control:

https://www.deseret.com/faith/2020/2/14/21133740/mormon-church-finances-billions-presiding-bishopric-ensign-peak-tithing-donations-byu-real-estate
Posted by BARE RECORD OF TRUTH at 2:12 PM 4 comments: