120: YOU CAN BUY ANYTHING IN THIS WORLD FOR MONEY

A photo of the World Trade Center,  in downtown Salt Lake City
located southeast of Temple Square and directly across from Brigham Young's home.
One of the many buildings the Church owns and manages through Deseret Management Co.
The photo is taken from the LDS Church Office Building. 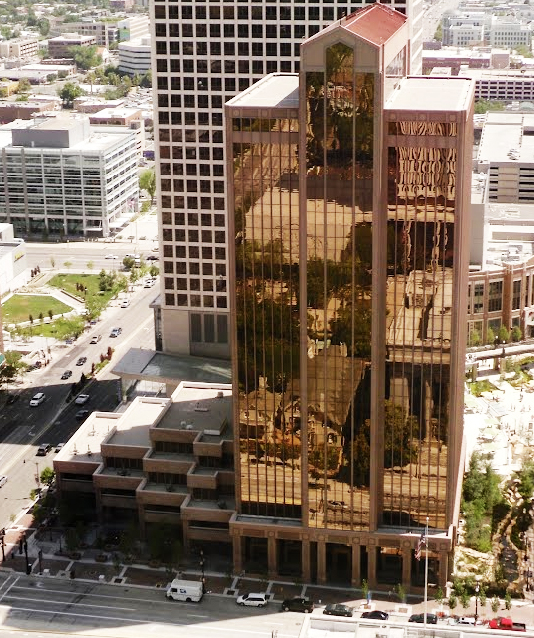 After partaking of the fruit of the tree which God forbid, Adam and Eve were cast into the Telestial world. Now in their mortal and fallen state, they were approached by one who claimed to be the god of this world. He tempted them to sell their priceless possessions given to them by God. He told them that they could buy anything in this world for money.

Money is not inherently evil, but potentially how  "money" is created and used could be considered corrupt.

If you didn't read the last lengthy blogpost, Ron Paul mentions one of the MANY problems facing our country. Probably one of the biggest problems is our monetary system and our financial crisis that we all face. Many are calling what lies before us as a "fiscal cliff".  It is the consequence of excessive debt, unfunded liabilities, spending, and bailouts.

Most do not realize that our money is fiat money and the powers that be can create money out of thin air called fractional reserve banking.

This started in our country when the Federal Reserve was created on December 23, 1913 on Jekyll Island. A thick book documenting this was written by G Edgar Griffin, entitled "The Creature from Jekyll Island". You can watch a very long  documentary which goes into more detail. It is called the Money Masters. (If all of this is new to you, it might be good to learn more about this.)

The Federal Reserve  is one of the most blatant scams of all history. Not only is it not "Federal" but there are no "Reserves" either.  This central bank has been given power to print money out of thin air, finance both sides in wars, create boom-bust cycles, and control inflation and/or depressions.

Another name for this is called usury and those associated with this would be called money changers. We all know what Christ reacted with the moneychanger in and around the temple.

I bring this up because I found it interesting that this "fine building" called the World Trade Center was once the location for one of the Federal Reserve Banks.

I have mentioned before about the Church's investiment of billions of dollars into the City Creek Center.  However, I just learned a little more information about the developer of the mall,  the billionaire Alfred Taubman. Yes, Taubman Company is the developer of some of the world's most successful luxury malls, but what I didn't know is that Alfred is also the chairman of Sotheby’s auction house.  A few years ago he was found guilty with his rivals at Christie’s to fix auction house commission rates to drive up profits.  Here is the link.  He was sentenced to one year in prison, but was released early for good behavior. For the life of me, I am not sure why anyone would want to partner with such a man.

Anyway, just in time for the holidays, below is one of the new billboard adverting our Church owned mall. The ads contain the same things that concerned me  when the mall first opened.... the ads now have new models and new faces in the ads, but the suggestiveness, the immodesty and the alcohol still persist.

Let's go shopping and spend our fiat money. All is well.