443: SPINE-TINGLING THRILL TO BE IN HIS COMPANY

Below photos are from the Mormon Newsroom:

From the LDS Press release:

"Over the weekend, the group will visit the Holy Land as Jesus Christ’s apostolic witnesses and minister where Christ taught during His ministry."

“This is a legendary land,” Elder Holland said. “It's a spine-tingling thrill for me to realize that I'm in the company of President Russell M. Nelson, a modern prophet in every sense that they were ancient prophets [in Jerusalem in biblical times] with the same authority and the same priesthood and teaching the same gospel.”

Elder Holland continued, “Our living testimony today is we have a living prophet this very hour on this soil standing in this land teaching that same doctrine. The significance of that for Latter-day Saints and for the world cannot be overstated. That's at the heart of the thrill I feel today."

Reading things like the above statements from Elder Holland cause me great concern because I believe that we speak too much about having a living prophet and following him.. instead of following Jesus Christ. . It was hard not to notice that in this past LDS General Conference which took place over Easter weekend, more was said about following President Nelson than about Jesus Christ. Starting from the first session of Conference.. three of the apostles talks were entirely on President Nelson instead of speaking about Jesus Christ... and it was Easter Weekend.

Do we ever see in the New Testament of the apostles testifying and talking all about Peter who was basically the President of the Church after the Jesus Christ ascended into heaven?. Does Matthew, Mark, Luke or even John even mention Peter's name in any of their epistles? Does Paul?  Or do the New Testament apostles focus solely on the Lord Jesus Christ? I am sure Peter was great.. but as a apostolic witness of Jesus Christ.. isn't it your role to testify about Jesus Christ? or are you a witness of another man's  job title?


Here are a few quotes from the first opening session of General Conference.

"With our raised hands, we promised to hearken unto his voice (President Nelson)....

"I am a witness that the hand of the Lord has been preparing him  (President Nelson) to become our presiding apostle and prophet...

"There are many logical reasons to follow President Russell M. Nelson.

"We embrace President Nelson as we would have embraced Peter or Moses if we had lived in their day."

"I promise you that as you remain resolute in following the prophet, your faith in the Savior will increase.

"In a future day, looking back on our mortality, we will rejoice that we walked the earth at the time of a living prophet. At that day, I pray that we will be able to say:

But I digress from the original intent of this post...Back to the media releases on President Nelson' World Minister Tour. 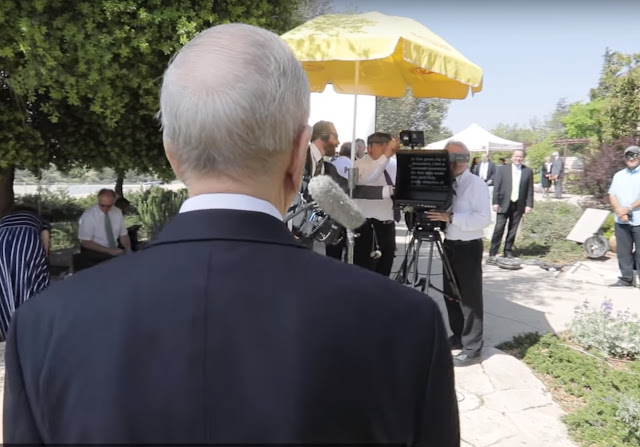 Most if not all of the public messages we hear from these "apostolic witness" are being read from a teleprompter. Above is a image of President Nelson giving a video address this past week in Jerusalem. I am reminded of the Lord's direction to His apostles when he said,

"Take no thought beforehand what ye shall speak, neither do ye premeditate:
but whatsoever shall be given you in that hour, that speak ye:
for it is not ye that speak, but the Holy Ghost".

When we decide to follow only a disciple of His, even if it is a true disciple, we miss the mark and fall to a Telestial state and are no better than the liars and thieves. (See D&C 76: 98-104.) So even when it is a man whose example we list or refer to, it is only to the extent that the man illustrates the correct manner to follow the Son of God.


The phrase “follow the prophet” does not appear anywhere in scripture. It does not appear there because it is an institutional invention designed to reduce resistance to centralized church decision-making. It was implemented deliberately during the administration of David O. McKay. It is an idea which is altogether alien to the Gospel of Jesus Christ. Instead, what appears in the scriptures is a curse pronounced on those who follow man or put their trust in man’s arm. (See 2 Ne. 4: 34; 2 Ne. 28: 31; D&C 1: 19.) Nephi’s final address warns the gentiles how vulnerable they are to this mistake, and how they will be cursed as a consequence. He offers hope, however, conditioned on repentance and return to following the Lord. (See 2 Ne. 28: 31-32.)

The difference between truth which can save and error which will damn is so fine a line it is sometimes compared to a two-edged sword, cutting both ways. Encouraging people to find that edge and to rightly divide between truth and error oftentimes will offend. It is still the truth. We really ought to fear God and not man. (D&C 3: 7.) The One who keeps the gate of salvation is not a man or men, for He alone will open or shut that gate. There is “no servant” employed there. (2 Ne. 9: 41.) If you arrive at that gate having been misled regarding your obligation to Him, having “followed the prophets” you will be among those whose eternal opportunities have been curtailed, no better off than liars and whoremongers. (D&C 76: 98-105.)

and lastly... speaking about any this to TBM will not be very well received. A close friend of mine sent me the following email this morning which prompted writing this blogpost.. with permission I post it below:

I’ve been trying to understand why I’m met with such apathy, resistance and anger from Mormons, particularly my own family, whenever I try discuss the new truths I’ve been exposed to if we are a church that believes in continual revelation.

It came to me this morning that the issue is with insecurity. And the thing they are insecure about is their knowledge of God. It is the great affliction of all Latter-Day Saints from the lay member to the president of the church. Ironically, it was knowledge of God that once defined Mormonism among all other Christian sects in the beginning of the restoration. Joseph claimed to have it and wanted his friends and family to have it likewise.

The reason Mormons will not wake up to a message of truth sounding in their ears like a dinner bell, is because they believe that how they perform on earth does indeed make a difference in the afterlife.....and in general, they are not very secure in their standing before God for various reasons. Deep inside, they feel guilt for whatever reason about how they have lived their lives. Maybe they feel they have not been honest enough, moral enough, thoughtful or loving enough. Maybe there is some sin they have not repented of. Maybe they engage in worldly lusts, etc. And so they live out their lives with the uncertainty of whether or not their performance on earth will merit Celestial glory rather than those other scary places of lesser glory where there is not chance for advancement.

To deal with all this uncertainty, they cling to the one thing in their lives they feel they CAN do perfectly which will ultimately provide for them the salvation they are uncertain of. They can be completely loyal to a church which gives them a promise of receiving a pass ticket to the Celestial kingdom given certain milestones are reached and endurance to the end with a Christ-like attitude is practiced. If they can have fidelity to that here on earth, it will ultimately make up the difference in the long run. Responsibility can be laid at the feet of the church rather than upon their own shoulders. It’s the one thing they feel they can do perfectly when everything else they do in their lives is imperfect.

So when you present them with the notion that their one safety net may not be a safety net at all and that they cannot depend on their membership in the "one true church" or their temple recommend to earn for them their ticket, it rattles their senses so much that they have to either ignore the message or tune it out completely. And when they are confronted with enough truth that they cannot ignore it, they usually lash out in anger as a coping mechanism. Deep down it's all about insecurity. If they were secure in what they believed, they would not hesitate to discuss and consider new truths and they certainly wouldn't be angry about what you are trying to say. They would rejoice that you care so much. I mean, if you knew what a pencil sharpener was because you own one, you wouldn't take any offense to someone who had never seen one discussing their views with you of what they think it is. You would just laugh to yourself and not be rattled one bit.

In essence, Mormons lack knowledge of God in a religion that is supposed to have the most of it and it makes them feel insecure. This process of obtaining knowledge of God exists on a spectrum with belief on one end and knowledge on the other end as outlined in Alma 32. The knowledge we all seek is an actual witness that God really does exist and that this is not all just a big fairy tale. Knowledge of God was always meant to REPLACE or FINISH our faith in Him. Nobody ever feels peace and security until they can finally leave their uncertainty behind and know something for certain. Getting to that point involves moving from exercising belief, to acting upon your beliefs to produce faith, then moving along various steps of faith until you arrive at knowledge. Think about it, how many times have you asked God for a sign that He is real? We all do it...because we are all insecure.....and that is because we don't have knowledge of it yet. So he sends us a sign but then our short-term memories demand more. But if you had knowledge of Him, your curiosity and uncertainty would at last be laid to rest.

I think that deep inside, Mormons know all this but they are too afraid to search it out because nobody around them is doing it and sadly, their leadership discourages it as well saying it is too dangerous. This is because they, like you, do not have knowledge of God and are insecure about it as well. But in their case, they know the whole church is looking to them for guidance so they cannot convey a message of insecurity. They must maintain the appearance of being in control and confident. They have produced nothing of their own that we would look to as a “special witness of Christ” and thus cannot stand on their own merit. To compensate for that, they fall back on the only doctrine that commands respect (follow the prophet) to instill in the hearts of the members a sense of security which will compensate for all the knowledge that they (the members) lack. The Lord actually addressed this very thing to the Sanhedrin when he said:

"Woe unto you, Scribes and Pharisees, hypocrites! for ye shut up the kingdom of heaven against men: for ye neither go in yourselves, neither suffer ye them that are entering to go in."

It’s all about the human reaction to insecurity.
Posted by BARE RECORD OF TRUTH at 4:13 PM 3 comments: