Are you a mainstream fish and swim with the current? 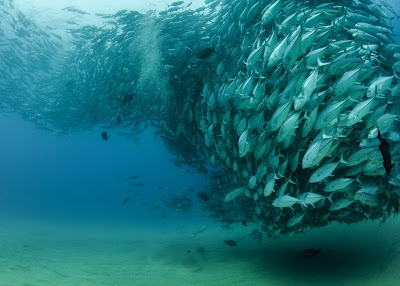 or are swimming a fish trying to swim UPSTREAM ? 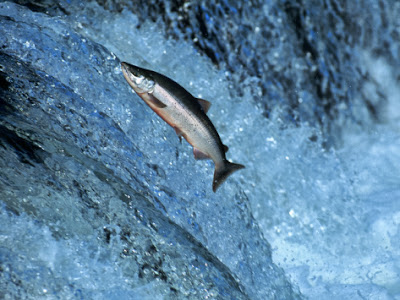 If you are LDS, you probably have been taught many times to stay in the mainstream of the Church. I can understand the reasoning behind our leaders advising us to do this. My parents have cautioned me as well when I started to read books that were not sold at Deseret Book. We are also taught to avoid anything on the fringe since it is too dangerous and you can possibly get mislead. I won't even discuss comments I get about searching into the mysteries of God. However, I equate searching for truth as being the same as a fish swimming upstream. In my worldview, the Gospel of Jesus Christ is all about swimming “upstream” against ALL currents we face in this world.

A recent article in the Church News was recently published about the importance of not being deceived and staying within the mainstream. link

Elder Carlos Asay said the following: "If the assessment of current position reveals the slightest deviation from the right course leading to eternal life or the slightest drift from the mainstream of our faith, we must make immediate course corrections.” link

I have a few questions. What if in 600 BC. the religious leaders instructed the members of the Church that they should stay in the “mainstream”? If Lehi was mainstream, what would have happened to him and his family? Would he have ever left Jerusalem or would he have been carried away into cavity by the Babylonians?

What if in 30 A.D. the religious leaders taught the Jews that they should be good “mainstream” Jews, would any of them listened to the teachings of Christ?  Would they have become Christians?

I think it is interesting to read in Luke 4 when it describes Christ’s first missionary journey in his hometown.   It is interesting that among his friends, relatives, neighbors, and fellow church members that the response was uniformly hostile. The congregation became so angry at what he taught that they attempted to cast him off a cliff. “And all they in the synagogue, when they heard these things, were filled with wrath, And rose up, and thrust him out of the city, and led him unto the brow of the hill whereon their city was built, that they might cast him down headlong.”

Christ escaped, but what is sad is that there was no hand raised in his defense (Luke 4:14-29). The truth is that, despite his family and friends exposure to his words and his works, "neither did his brethren believe in him" (John 7:5). Furthermore, “that if any man did confess that he was Christ, he should be put out of the synagogue.” (John 9: 22)

What does it mean to be “put out of the synagogue”. In todays terms.. would this mean that they were excommunicated? Cast out of the mainstream religious organization? In other words, mainstream is safe, doesn't rock the boat, but follow the masses, the majority. History shows that people like Lehi, like Abinadi, like Alma, like Christ were never in the mainstream. The mainstream usually are those who are told that all is well, those with flaxen cords, those who loveth the world. Those who are swimming upstream face strong current of opposition.


"Remember, a dead fish can float downstream, but it takes a live one to swim upstream”
W.C. Fields
...

Sidenote: We are told in JST Matthew 1:41 that the last days is going to be as it was in the days of Noah.  The Gospel is a net that has been cast out to gather together all manner of fish. (Matt. 13: 47-50.) The angels are going to come at the end of the world to pick through all manner of fish, they keep the good, and the wicked are cast away. What are the good fish? are they the "mainstream" fish? Do any of the "fringe-fish" get selected? What about the fish swimming upstream? Are they the fish that get preserved?

I learned this recently in a talk that I just listened to on Covenants. It describes that everything is written in the heavens including a pattern of the stars that is called a band or "net of Pisces"

"When the Lord hung on the cross, and the sun was darkened at noon, if you had looked up in the sky to see what was overhead, you would see the sacrificial sheep in the pattern of the stars; what we call Aries today. Proceeding forth from under the forefoot of Aries, we have renamed it "the bands of Pisces," but it should be more appropriately rendered as the net of Pisces. Because from under the fore leg of the Lamb, was cast out a net. This is the New Testament pattern or church. That net gathers in at least two kinds of fish. The larger one that is gathered in the net is forever circumnavigating the ecliptic, and will do so eternally. The larger group in the star field, though caught in the net cast by the Lamb will never rise up to the North. The smaller group, the smaller star field of Pisces, which also is caught in that same net, is pointed to the sides of the North, where the Throne of the Father is to be found; that place around which all things revolve and where the Father presides and sustains all of His creations."

The larger group of fish are in the mainstream. the smaller group swims upstream to the North to return to their original home.
﻿