69: WHY DID ABINADI WEAR A DISGUISE?

The following is notes from a conversation as well as an email that I recieved from a friend. Much of the symbols can be found in Tom Cryer's book, "Visual Testament: and the Israelite Indian" 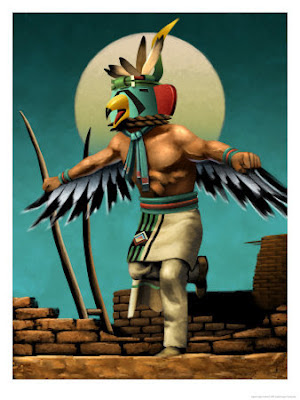 
When we first read this, we assume that Abinidi is disguising himself so he would not be recognized, as though he was fearful of being caught. But the next sentence says that he tells the people his name. Why would he disguise himself if the very first thing he tells people is his name. Also, he wanted an audience with the king, that was his purpose, so it seems apparent that he disguised himself to gain audience with the king, not to avoid him.

The Native Americas use clothing or costumes to tell a story. Their clothing and associated props (feathers, sashes, pipes, head bands, ankle bands, wrist bands, head dress, masks ext) literally states their message that the people easily recognize, including of course illiterate people of whom most the ancient native people were.

In the 1820 English dictionary, one of the definitions of "disguise" was "To disfigure; to alter the form, and exhibit an unusual appearance." . Using this definition, we could say that Abinidi came among them wearing his message. He had the garb and symbols on his body, which was his unusual appearance or disguise, unlike his visit two years earlier (which is why they knew him not this time around). But his message was load and clear and understood by the people because of what he was wearing. And what could he have been wearing?

In the Mosiah 12: 3-. You will notice the vivid and symbolic language used. I will put into parenthesis the item that Abinidi may have been displaying to illustrate the word. "Thus saith the Lord, ...this generation...shall be brought into bondage (wrist bracelet illustrating bondage) and shall be smitten on the cheek (cheek markings) yea and shall be driven by men (whipping stick or prodding stick)...and the vultures of the air and the dogs (mouth mask of a vulture beak or dog's mouth -...shall devour their flesh...And the life of king Noah shall be valued as a garment in a hot furnace (red colored skirt strings or tropical bird feathers). And it shall come to pass that I will smite my people with sore afflictions, yea, with famine and with pestilence (old dirty skirt or cloth), and I will cause that they shall howl all the day long (hollow tube). I will cause that they shall have burdens lashed upon their backs (sack on back) and they shall be driven before like a dumb ass (whip or stick)...I will send forth hail among them and insects (head mask and horns) shall pester their land also and devour their grain."and it shall smite them (sash symbol or head dress or body paint), and they shall be smitten with the east wind (body paint)
His disguise was for the illiterate to understand, which they did and then took him before the king. His priest were educated and literate. Abinidi then quotes and reads the scriptures to them. He used their written language to condemn the priest. Abinidi spoke the words of the Lord in the language of his audience.