175: GADIANTON ROBBERS and THE gOD OF THIS WORLD

"And behold, in the end of this book ye shall see that this Gadianton did prove the overthrow,
yea, almost the entire destruction of the people of Nephi."
Helaman 2:13

In the next few days, the Who's Who in the world of power, control, money will be in Salt Lake City for some important events.  Financial Executives and Corporate Stockholders of Goldman Sachs will hold their meeting tomorrow, and Zion's Bank will be holding their annual meeting on Friday. Next week there will be a ribbon cutting ceremony for the new Utah Data or "Spy" Center that is being built just south of the Salt Lake Valley.


It is very unusual to have all of the Goldman Sacs stockholders to come to Salt Lake for their annual shareholders meeting. It will be held in their 2nd largest corporate office in downtown Salt Lake located on Main Street. In a national news article entitled "How Salt Lake City won over Goldman Sachs, it was quoted: “When the world’s biggest investment bank, Goldman Sachs, holds its annual shareholder jamboree this week, it will not be in the financial centers of New York or London, where most of its traders work. It will be in Salt Lake City, home of the Church of Jesus Christ of Latter-day Saints and the largest Mormon population in the world." Link to article 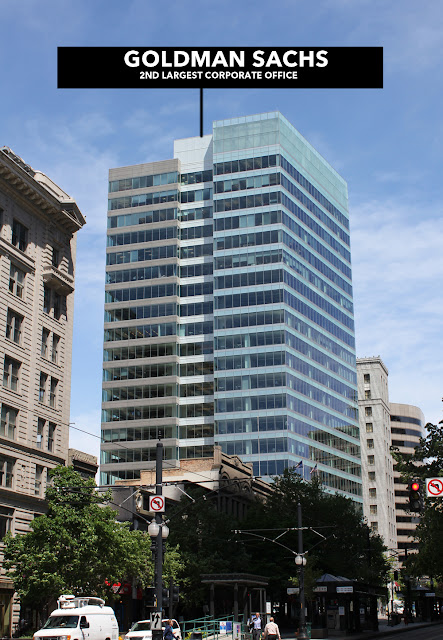 I took a walk during my lunch break today and took some photographs of some of the buildings in downtown Salt Lake. Most of these buildings are newly built within the past few years, with some of them still under construction.  Above is the Goldman Sachs new office building on Main Street just a few blocks away from the Salt Lake Temple.

It was reported in the above article that Utah leaders has been trying to persuade the banking giants that it is the “Wall Street of the West”, by offering them tax incentives.

Goldman’s senior bankers earned an average of $2,900,000 each last year, led by its chief executive, Lloyd Blankfein, whose $21,000,000 milion  pay package made him the most highly paid banker in the world.  In November 2009, the chief executive of Goldman Sachs declared in an interview, as a banker: "I'm doing God's work." Link to article

I think it is important to mention that Goldman Sachs was sued on April 16, 2010, by the SEC for the fraudulent selling tied to subprime mortgages, a product which Goldman Sachs had created. With Blankfein at the helm, Goldman has also been criticized "by lawmakers and pundits for issues from its pay practices to its role in helping Greece mask the size of its debts. Blankfein earned a total of $54.4 million in 2006 as one of the highest paid executives on Wall Street. His bonus reflected the performance of Goldman Sachs, which reported record net earnings of $9.5 billion.  Also, Lloyd Blankfein is the Gala Chairman of the Rockefeller family's Asia Society in New York. 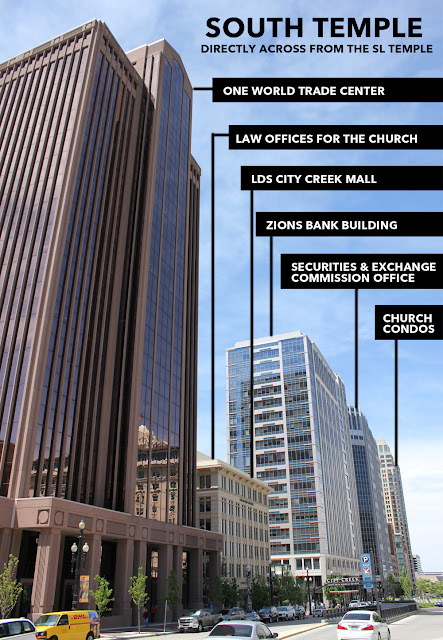 Here are couple of other interesting buildings that are currently under construction in downtown Salt Lake. I am not sure where all the money is coming from to build these buildings. Salt Lake already has a Federal Court house, but is now building a new 10 story glass building. 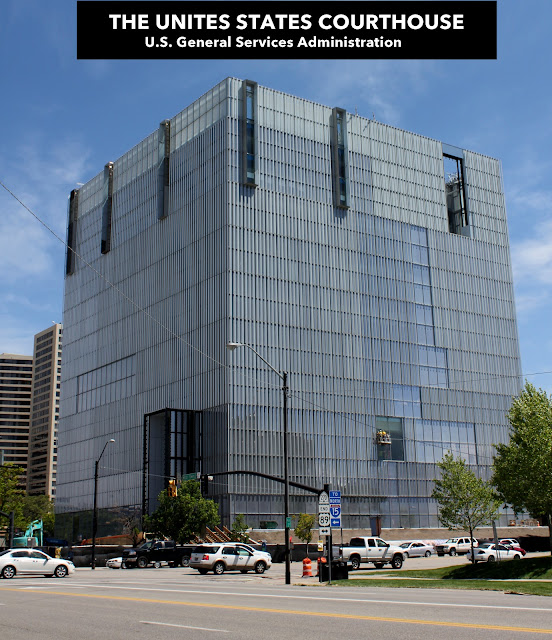 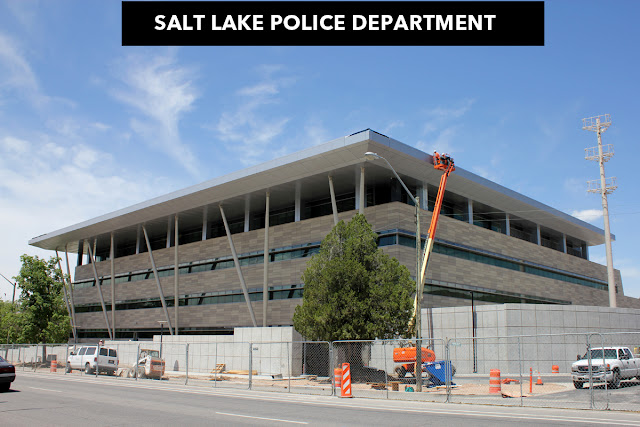 Also, a massive construction just south of Salt Lake is the US Government "Spy Center" supposedly to keep us also "safe".   It is called Utah's Data Center. A special ribbon cutting ceremony will be held next week on May 30th. Invited to attend is the "most loyal partners at the local, state, and federal level who have had the vision and fortitude to enable us to build this powerful Intelligence Community data center "for the good of the Nation". LINK to article 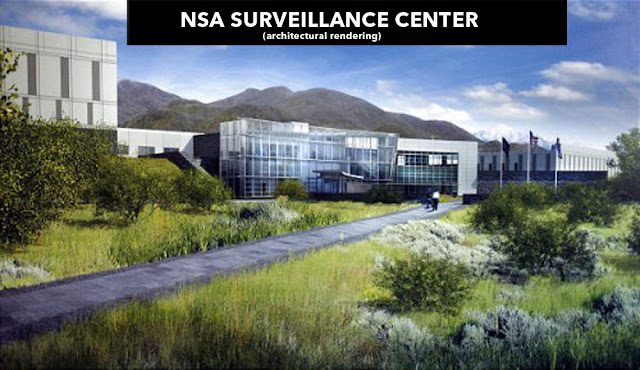 A new exposé in Wired Magazine reveals details about how the National Security Agency is quietly building the largest spy center in the country in Bluffdale, Utah, as part of a secret NSA surveillance program codenamed "Stellar Wind." An investigative reporter James Bamford, says the NSA has established listening posts throughout the nation to collect and sift through billions of email messages and phone calls, whether they originate within the country or overseas. The Utah spy center will contain near-bottomless databases to store all forms of communication collected by the agency. This includes the complete contents of private emails, cell phone calls and Google searches, as well as all sorts of personal data trails — parking receipts, travel itineraries, bookstore purchases and other digital "pocket litter."

I want to mention more about this building that is across the street from the Beehive House and close to the Temple. I need to do more research, but I have always felt this to have a strange feel to this place. It is a "Gentlemen's Club". Members include LDS members Spence Eccles (banker) and Senator Orren Hatch, as well as Senator Bennett.

From the website: "For more than 120 years, the Alta Club has been the gathering place for Utah's business, educational and political leaders. Originally modeled after the private clubs that flourished on the east and west coasts in the late nineteenth century, we've retained our traditional spirit while embracing the present. Located in the beautifully restored and historically significant Alta Club building in the heart of downtown Salt Lake City, we've recently completed a $4.2 million renovation of our four floors." Link 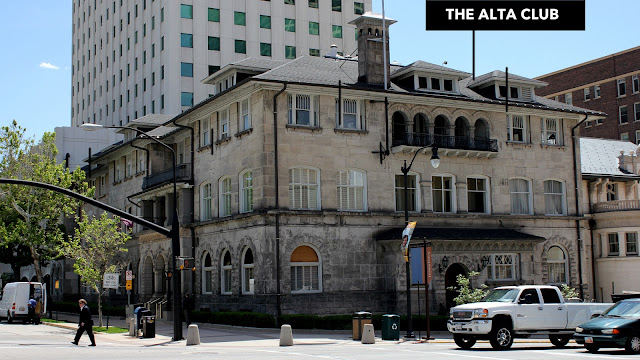 "And seeing the people in a state of such awful wickedness,
and those Gadianton robbers filling the judgment-seats
—having usurped the power and authority of the land;
laying aside the commandments of God, and not in the least aright before him;
doing no justice unto the children of men."
Helaman 7:4

Yea, wo be unto you because of that great abomination which has come among you; and ye have united yourselves unto it, yea, to that secret band which was established by Gadianton!

46 And it came to pass that the robbers of Gadianton did spread over all the face of the land; and there were none that were righteous save it were the disciples of Jesus.
4 Nephi 1:46