Photo on the left taken on October 19, 2012 of a large Sequoia Redwood tree at the Jedediah State Park in California. The Photo on the right is of a Bristlecone Pine (image found on the internet.) 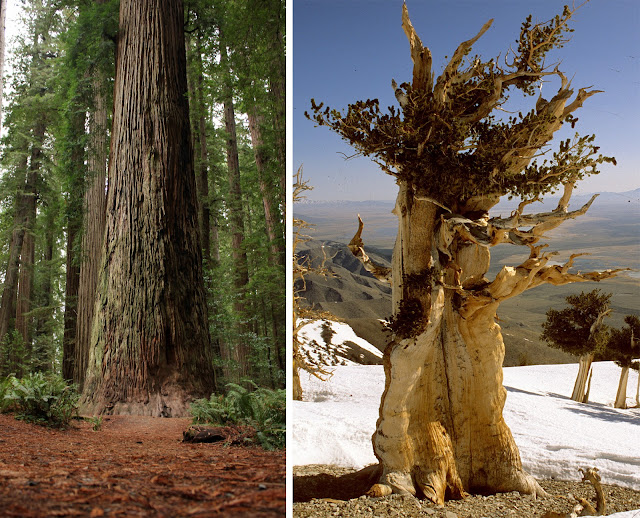 In the lush lowlands near the coast of California and Oregon, there are hundreds of Redwood Sequoia trees. Many of these trees have fallen to the ground… HUGE, BEAUTIFUL Trees that have toppled over. One of the reasons so many of these Sequoia trees have fallen is a result of not sending down deep roots. Since the surface of the soil is abundant with easily assessable nutrients, these tree will send their roots along the surface of the ground to obtain more and more easily accessible water that is needed to sustain the enormous tree. The roots end up being far away from the trunk and lay in shallow ground.
.
As the trees become taller and taller, many times the long shallow root system cannot support the tall, gigantic tree. One who has seen the Sequoia will also notice that the trees have a hollow core. the inner core is dead and usually disintegrates after time from insects, disease and rot. The living part of the tree is only on its outer layer. It is interesting to note that while the tree is void of a center, which does weaken the tree structurally; it can grow quite nicely without a center core. To most people, the tree appears strong and firm and it is not apparent the tree is not solid, but just a shell.
.

On the opposite extreme, on the high mountain tops, near the tree line where trees are unable to grow, one can see the solitary Bristlecone Pines, growing out from a rocky surface and white stone. These trees aren’t tall, proud, magnificent or standing upright, but are gnarled, knotted and twisted, and sometimes almost appear nearly dead. These trees are remarkable for their ability to survive adverse growing conditions and are among the oldest trees in the world. (some date back 4, 900 years (prediluvian) and have reached an age far greater than that of any other single living organism known.) Its roots sink deep as well as wide into an inhospitable rocky dolomite soil. Invasions from bacteria, fungus or insects that prey upon most plants cannot penetrate and destroy this tree due to its dense, highly resinous wood.. which also prevents rot. The outer wood of the Bristlecone pine when exposed to winter ice, driven by high winds, becomes beautifully sculpted and polished.


It would be well with us tobe more like the Bristlecone Pine in order to survive the onslaught of the comings days... combating the daily fungus, the “bacteria” and insects of the world that is all around us. More importantly....It will only be possible to survive by having roots securely fastened… deep and wide on the rock and soil of Jesus Christ. This ultimately might require us to stand alone, and be different. This could possibly mean to not be “appealing” like the Sequoias, who appear strong, magnificent but has a hollow center with shallow roots.
Posted by BARE RECORD OF TRUTH at 2:48 PM 4 comments: