"And it came to pass that king Noah built many elegant and spacious buildings; and he ornamented them with fine work of wood, and of all manner of precious things, of gold, and of silver, and of iron, and of brass, and of ziff, and of copper."
Mosiah 11:8 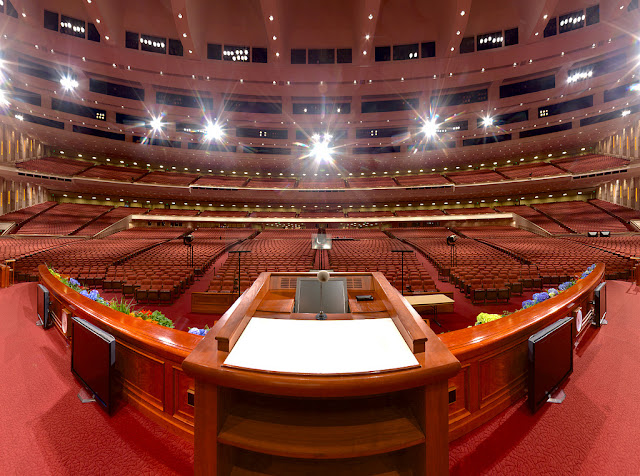 My family and I recently went on a tour of the LDS Conference Center. I learn some interesting facts from our tour guide. Some of the facts she mentioned:
But the most interesting thing that the tour guide mentioned was about the "Hinckley Pulpit" which was built from the walnut tree from President Hinckley's backyard. . He gave the Conference Center's first address in April 2000, sharing a personal story about a black walnut tree he had planted near his family home nearly four decades before the tree died the previous year.

He inquired about possibly using the walnut wood for the soon-to-be-completed building's pulpit; the tree provided just enough for the pulpit's thin veneer.

VENEER: from Websters Dictionary: a superficially valuable or pleasing appearance. To face or cover an object with any material that is more desirable as a surface material that the basic material of the object. A deceptive, superficial show, a façade.


This is the story that President Gordon B. Hinckley's told during the Saturday morning session of LDS general conference on April 1, 2000

Now, I was always under the impression that the pulpit was made of solid walnut.

However, Come to find out the tree was already dead in the backyard, and there wasn't enough wood to build the pulpit. There was only enough to provide a thin veneer. The pulpit appears to be made of walnut, but it is actually is not.. it is made out of cherry wood, with a veneer of walnut. That is why the fire and water damage that occured at the conference center a few weeks ago was such a concern. When there is water damage, any veneer could possible warp, or come detached and expose the true material underneath.
Posted by BARE RECORD OF TRUTH at 11:21 AM 15 comments: