Yesterday I watched as almost all the trees on the south end of the Temple were cut down.

Church tradition has it that some of the other older trees on Temple Square were planted in 1893. They were grand elm trees and the seeds came from the World's Fair held in Chicago, Illinois held that year in 1893.

In fact, one of the oldest trees was located at the corner of South Temple and Main Street. This "tree of paradise" was planted in 1869 and was part of plantings that surrounded the square and extended down both sides of the street. It is one of the oldest planted trees in Utah. 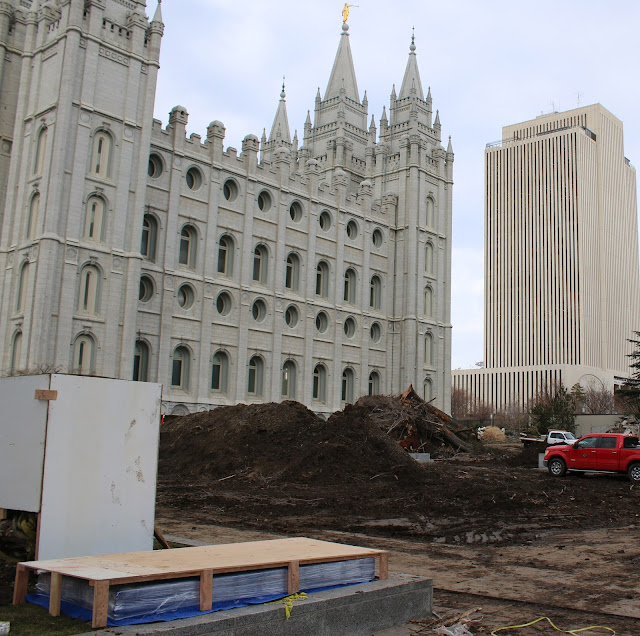 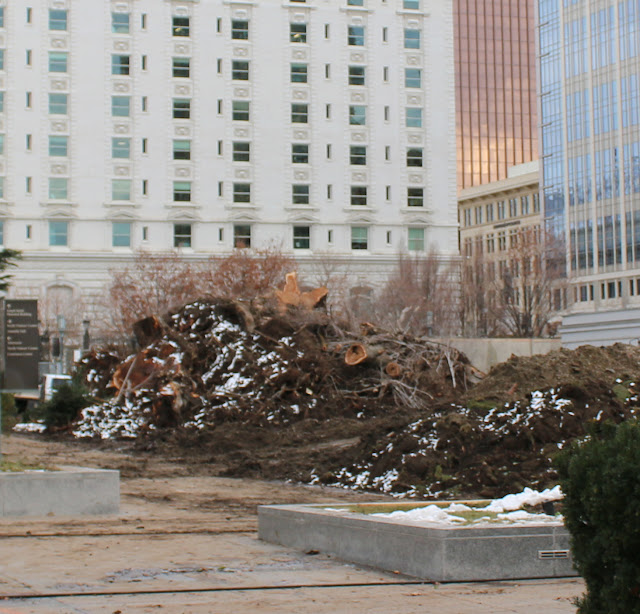 While many of the trees on Temple Square will still remain, unfortunately there are more trees slated to be cut down in the coming days. They will be cut down, removed, and maybe used for firewood and burned. Trees are symbolic connections between the earth and heaven. The roots that are planted in the soil of the ground are reflected in the branches that reach up into the heavens.

In addition to the trees being cut down, it was announced today that parts of the ceremonial temple clothing is also going to be removed and changed. Here is a link to the announcement
from the First Presidency and a sample photo from the Church. In my opinion, another symbolic element (like the trees) of a connection between what is above to what is below has been cut and removed.

Here is link to the news article in the Church owned Deseret news.
https://www.ksl.com/article/46705726/adjustments-made-to-latter-day-saint-temple-ceremonial-clothing


Some adjustments have been made to temple ceremonial clothing. These adjustments don’t reflect changes to temple symbolism or doctrine but are intended to make the temple experience more simple, comfortable, and accessible by making the clothing easier to put on, care for, and afford.

From the photo above that the Church publicly posted, many faithful Church members will see some of the elements that have been removal like the circular insert in the cap and the ties from the cap and the veil.

I am grateful for good friends who share with me their research and knowledge, one such friend writes this blog. He shared the following information to me in a personal email and with his permission I share the following.

-------
Regarding the removed of the circular insert:

The cap is circular when viewed from above, like the pupil of an eye. It is similar in symbolism to the Egyptian hypocephalus, which was a circular disk placed under the head (hypo = under, kephelae = head) of the mummy. It represented the Eye of Horus on earth which looked upward into the eye of eternity (source, search for "pupil"). It represents seeing eye to eye with God, having an eye single to his glory. It is the conduit through which light and life flow from heaven into the soul. For all the same reasons, it shares the same symbolism with a seer stone(s). Also, regarding the connection between the cap, seerstone, hypocephalus connection: The caps worn by the priests in their temple service served as a cushion for a crown, and stood in place for the crown itself. (Hugh Nibley, Don E. Norton, Temple and Cosmos, Deseret Book, Pg. 55)

Facsimile #2 is a drawing of a hypocephalus. Figure 3 depicts God sitting enthroned on his ark, and around/on his head is a circular "crown of eternal light".

The function of the seerstone and hypocephalus were similar, to transmit light from God to the head of the initiate. The cap symbolizes this transmission, and represents the "crown of eternal light" that shines out of those who are chosen, called up through the veil, and anointed Kings and Priests unto God.

Regarding the removed of the tie of the cap to the robe:

Our degree of fellowship with heaven is symbolized by the wearing of robes. This fellowship is "priesthood", as you know. Of the fulness of this priesthood, Joseph Smith said:

"And God said unto Noah the end of all flesh is before me, for the earth is filled with violence through them, and behold I will destroy them with the earth," thus we behold the Keys of this priesthood consisted in obtaining the voice of Jehovah that he talked with him in a familiar and friendly manner, that he continued to him the Keys, the Covenants, the power and the glory with which he blessed Adam at the beginning." (ibid)

There is a bow on the cap, with six loops of fabric. This symbolizes the six active days of creation, which, combined with your own soul, fully redeem creation as you walk through the veil. If people will do this, the Earth will truly not be utterly wasted at the coming of Christ and the Fathers.

The epaulet on the shoulder folds three times in one direction, and four times in the other, creating twelve segmentations. These represent the twelve tribes of Israel. Aaron's priestly vestments included shoulder pieces supporting the ephod, and on each shoulder there was an onyx stone engraved with names of six of the tribes. When Aaron walked through the veil and the Lord looked down upon him, the names of his people would be engraved on the upward-facing shoulder piece of the ephod as a memorial. The people could be assured that the Lord would remember them and his covenants to their fathers (Exodus 28:9-12). We carry the same memorial through the veil on our epaulet, a silent plea to God to remember scattered Israel. Inasmuch as the blood of Israel actually flows in our veins, walking through the veil redeems Israel just as Aaron symbolically redeemed Israel by carrying them through the veil.

The link between the cap and robe (revelation and priesthood) happens between the bow and the epaulet. The result of our relationship with God (if we develop it) is to be adopted into the family of God through Israel, and to receive a knowledge of the hidden mysteries of creation in the Holy of Holies.

As a side note, there is also a complementarity between the cap/seer stone and the woman's facial veil. The following comes from an interview with Joseph Smith Sr. where he summarized the Book of Mormon as far as he was familiar (including the lost portion of the record). When King Mosiah I found the Jaredite seer stones on the ground during the Nephite exodus through the wilderness, he took them to the tabernacle. The Lord asked him “What have you got in your hand, there?” Mosiah replied that he did not know, but had come to inquire. The Lord said "Put it on your face, and put your face in a skin, and you will see what it is." Mosiah put on the spectacles and veiled himself in an animal skin, and could see everything past, present, and future." (source )

When Joseph Smith used the seer stone, he had to place his face in a hat. The only description we have of the material of Joseph's hat specifies that it was a beaver-skin hat. Don Bradley argues that "Joseph Smith did not understand himself to be looking into a hat, per se, but rather to be looking into an animal skin." (source).

The facial veil, the skin of an animal who gave its life for the purpose, is needed to mediate and filter out all unwanted ambient light. It creates space for the coherent and properly ordered transmission of knowledge through the seer stone. The veil's function is "wisdom", and the seer stone's "knowledge".