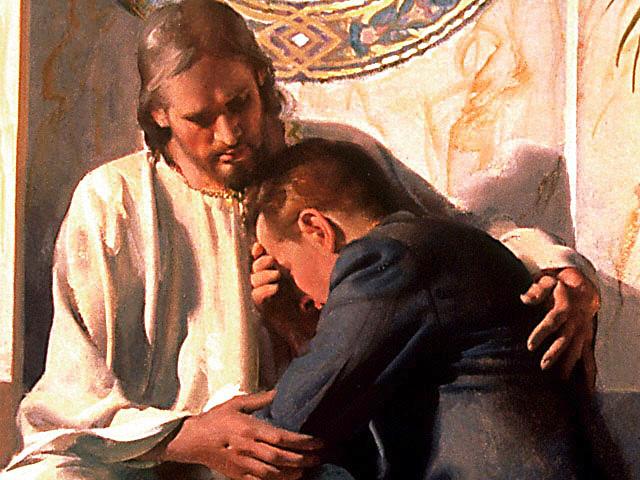 Written by my friend and posted with his permission:
....

The message of repentance in the scriptures was often to a religious crowd who considered themselves the Lord's people and who thought they were righteous (Luke 18:9-14).

One of the reasons we may feel the Book of Mormon's message of repentance doesn't apply to us as "faithful" Latter-day Saints is because our lives, by and large, are in harmony with the principles taught from our pulpits and in our Sunday schools.  We keep the commandments and fulfill our callings.  Although we acknowledge in word that the message of repentance still applies to us as much as anyone, we are often perplexed about what it is we must repent of.

Besides serious transgressions, one of the things we must repent of are our misconceptions, and false traditions; or, what the Book of Mormon calls "unbelief."

God's prophets mourn our state of unbelief because it causes us to not "search knowledge, nor understand great knowledge, when it is given unto them in plainness, even as plain as word can be" (2 Ne. 32:7).  Because of that unbelief and stiffneckedness the Spirit stops the utterance of prophets when they might otherwise desire to share more about God's plan (ibid.).

King Benjamin taught that unbelief is a result of failing to read and understand God's word (Mosiah 1:5).  Because men fail to search the scriptures they "dwindle in unbelief" and fail to believe the truth when it is taught to them "because of the traditions of their fathers" (ibid.).  Dwindling in unbelief disables men so that they cannot understand the word of God.  This lack of understanding hardens men's hearts (Mosiah 26:3).

In order for us to repent of and conquer unbelief we must come into contact with the "light of the glory of God" (Alma 19:6).  This encounter will cast away unbelief and dispel the clouds of darkness (ibid.).  For the majority of Latter-day Saints this encounter will begin to occur as we search the scriptures, but particularly the scriptures of the restoration.  We can choose to have this encounter with light and truth and begin to peel away the dark scales of unbelief, or we can choose not to receive the light.  Those who choose not to receive the light will be deceived, for they will not have the light required to discern between true and false messengers.  They will not be prepared for the "test" that Heber C. Kimball prophesied would overcome us in our day.

In order for you to begin to remove the condemnation under which you labor you must take the Book of Mormon seriously.

In order for you to begin to take the Book of Mormon seriously (or to not "treat it lightly") you must understand its message.

In order for you to begin to understand the message of the Book of Mormon, it is vital for you to dismiss false notions about who "My people, O House of Israel" are, and who "the Gentiles" are.

The truth of the matter is disconcerting for many people when presented with it, and so they choose not to search out the matter.  They think that those who would voice an opinion contrary to their traditions are "mad" (Mosiah 13:4).  Why is it that when a prophet declares the truth about the scriptures the religious are angry with him?  Must a man be a false prophet because his message angers you?  Must a prophet's message make you feel good about yourself?

A proud man will usually choose to remain blind even when presented with light and truth because it salves his conscience to retain a false identity.  Doing so allows him to retain his pride, and believe in the message that "all is well" (2 Ne. 28:21).  But the Lord has made it clear that we have to shed false traditions and become humble and accept truth if we will be saved (Alma 32:15-16).

Joseph Smith knew he was the "Gentile" who was chosen to begin the latter-day work (Title Page).  He referred to the rest of the Saints as "Gentiles" in the Kirtland Temple dedicatory prayer, which he received by revelation (D&C 109:60).  Throughout the Book of Mormon the writers are persistent and consistent in their use of the term.

Without explaining the entire issue, it's important to be presented with the idea so that it may be searched out.  Those who look into the matter will begin to see it clearly.  From beginning to end, European descendants are the "Gentiles" of the Book of Mormon, nobody else.  Unless you are a Latter-day Saint who also happens to be Native American, you are not the "remnant" or the "House of Israel" spoken of in the Book of Mormon.

Don't let prejudices, misunderstandings, and false traditions deter your search.  Never mind what you think your Patriarchal blessing tells you about the meaning of "the House of Israel" in the Book of Mormon.  Those first or last sentences about lineage in your blessing no more help you understand the Book of Mormon than does the term "High Priest," as we use it today, help us to understand Alma 13.  They're almost wholly different.  Those things will all become clear as you discard false traditions and put off unbelief.  It doesn't matter if you descend from the House of Israel way back when, you are a "Gentile" to the Book of Mormon writers.

Once you can understand your identity, the prophecies and messages of the Book of Mormon will begin to become very real to you.  The Book, as a whole, will begin to make much more sense.  You will be able to see more clearly, in order that a more thorough repentance may begin to take place.  It will be a precious gift, opening up to your view the fulness of the Gospel.  But not until we can put off "unbelief."  If we fail to understand our identity and the message of the Book of Mormon, we are dwindling in unbelief.

Many of our ideas about the scriptures are correct, but misapplied.  Many of our precepts are true and scriptural, but misunderstood.  It is true that the repentant Gentiles will ultimately be numbered among "the House of Israel" (2 Ne. 10:18).  We've gotten too far ahead of the game, however, in assuming that we've already made it.  We haven't.  The House of Israel will very soon receive the Book of Mormon and the fulness of the Gospel.  They haven't received it yet, but they will soon.  It will be brought unto them by the kings and queens of the Gentiles, who will act as nursing fathers and mothers to them (2 Ne. 10:9).