"There was power in that pointing finger"

Elder Rasband and his wife, Melanie spoke in a devotional broadcast  on Sunday, January 9, 2022. In her talk, Sister Rasband shared the following story about when President Nelson pointed at her when  she arrived late to a meeting.
There was an article written about it on LDSLiving. 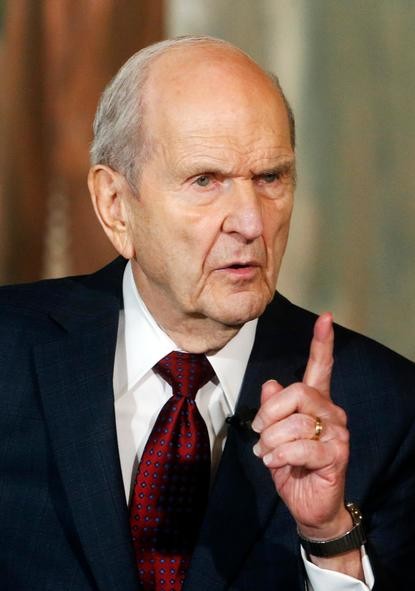 Here is the excerpt from her talk that was shared in the article.

Years ago, when President Nelson was president of the Quorum of the Twelve Apostles, Elder and Sister Rasband attended an annual mission leadership seminar in Provo. Sister Rasband was scheduled to attend a meeting with the mission presidents’ wives, and for whatever reason, she arrived late.

“The room was full of our devoted sisters,” Sister Rasband says. “I stepped in near the back of the room, looking for a seat I could slip into.”

But as she was looking for a seat near the back, eye caught the eye of President Nelson, who was seated on the stand.

“He smiled. I smiled back, despite my embarrassment for being late,” Sister Rasband says. Then President Nelson held her gaze as he motioned with his finger for her to come take a seat on the front row. Not wanting to draw attention to her late arrival, Sister Rasband indicated that maybe instead she could stay and sit near the back. But President Nelson continued to smile and again beckoned for her to come and take the front-row seat that had been reserved with her name on it.

“There was power in that pointing finger,” Sister Rasband said.

So she smiled back, took a deep breath, and “walked the long walk” to the seat awaiting her on the front row. After the meeting, Sister Rasband bolted from her seat to try to catch President Nelson and ask forgiveness for not responding to his request the first time. His response was to again smile and lovingly say, “Thank you for being obedient.”
“The Son of God has also invited each one of us to come unto Him to step up and be like Him. The Lord taught, lifted, blessed, forgave, and loved, ministering one by one like President Nelson did for me. Like we can do for others,” she said.

Did you catch that last sentence? ....
The Lord taught, lifted, blessed, forgave,
and loved, ministering one by one
like President Nelson..
It might just be me... but I think that sentence has it backwards. That word order puts Nelson as the example being followed by the Lord. It should read...President Nelson ministered like the Lord. Have we started to elevated President Nelson over Jesus Christ in saying that the Lord is like President Nelson?
Posted by BARE RECORD OF TRUTH at 10:36 AM 2 comments: