Back in the 1970's, Paul Harvey hosted a radio program called The Rest of the Story.  It consisted of little-known or forgotten facts on a variety of subjects with some key element of the story (usually the name of some well-known person) held back until the end. The broadcasts always concluded with a variation on the tag line "And now you know the rest of the story."
The last blog post described one element/symbol shown to me on my hike up Big Cottonwood Canyon.  Here is one additional photo of Lake Mary that I took from a higher vantage point. On the right, you can see the man-made dam that controlled the living water. On the left you can see just a small pool of water remaining. It is hard to see but the lake probably was a least 40 feet deep.
I thought I should share some additional  "little known" key facts/symbols from the hike.. so if anyone reads this they can know the "rest of the story" from the hike.

...
The MOON:
The weather on the day of my hike was hot and sunny. Not a cloud in the sky. It was a clear day. When I began my hike, I was surprised to see the moon still visible in the Western sky. Usually the moon is no longer visible at that time of day and has descended below the horizon. It was interesting to note how close the sun and moon were to each other, both still visible together. 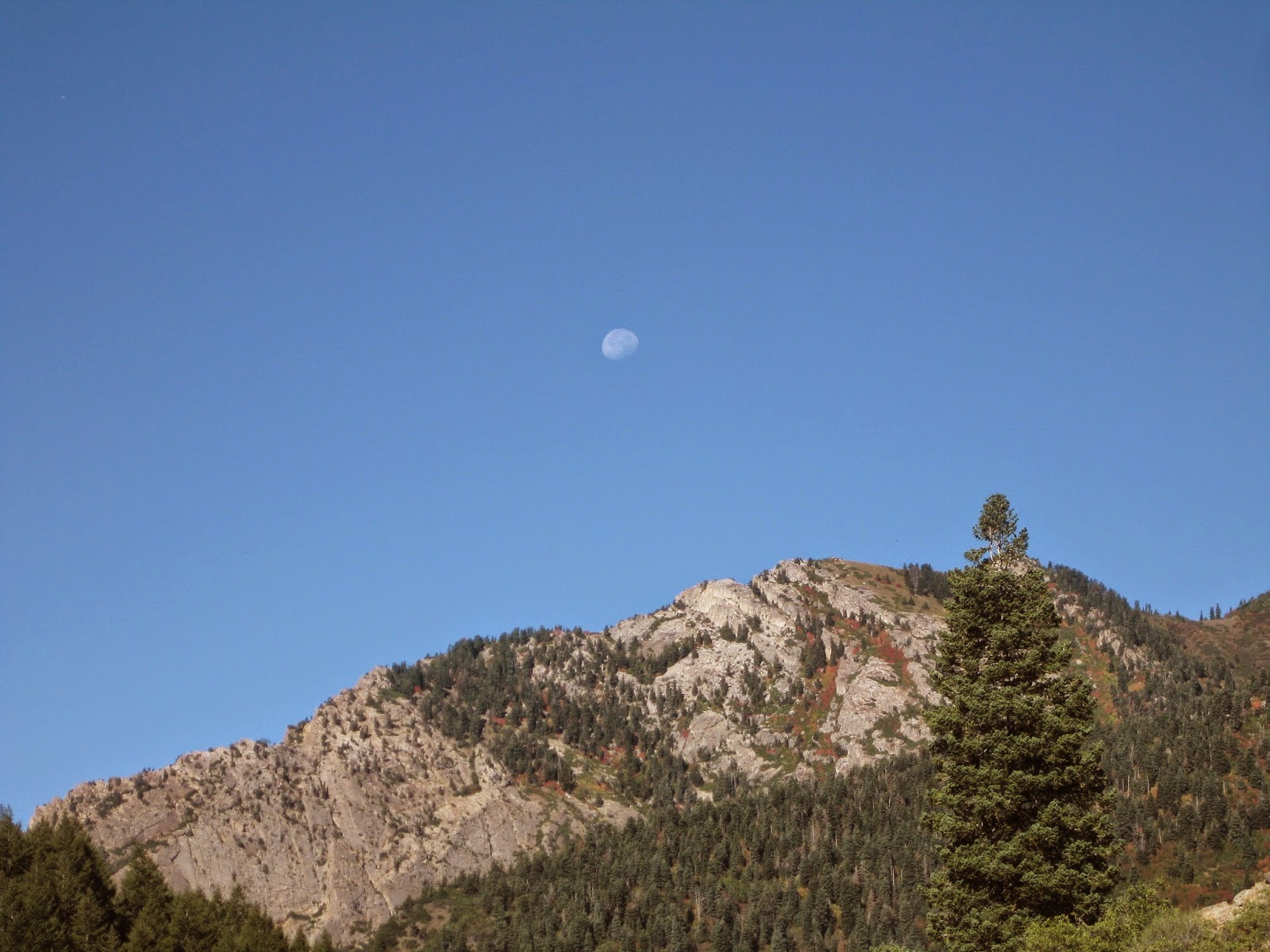 SEVEN WOMAN:
I was not the only one  hiking this trail to Lake Mary. A group of women had already hiked to the top and were descending down. They passed me. I thought I counted seven women, but my wife was able to see an eighth woman in the photo. (one is not clearly visible in the photo). It was symbolic for me to first see the moon that late in the day, and then to see a group of women consisting of at least 7. There was a lesson for me to learn from that.

...
WHITE HAWK:
Usually on my hikes I will see symbolic wildlife. Once I reached the peak of the mountain, I was able to see Mount Timpanogas in the distance. I hiked Mt. Timpanogas last year on the Summer Solstice when there was still in the snow on the trail.  In the highest tree I noticed a beautiful white bird. (you can see in perched on the left pine tree).

Here is a zoomed-up photo of the bird. I am not sure what kind of bird it is. To me it looks like a type of hawk that is white. It looked very stately. I found the bird to be majestic and beautiful.  It was watching me and did not fly away. Most times I am unable to get a photo of the wildlife that I encounter because I can't get my camera out in time. 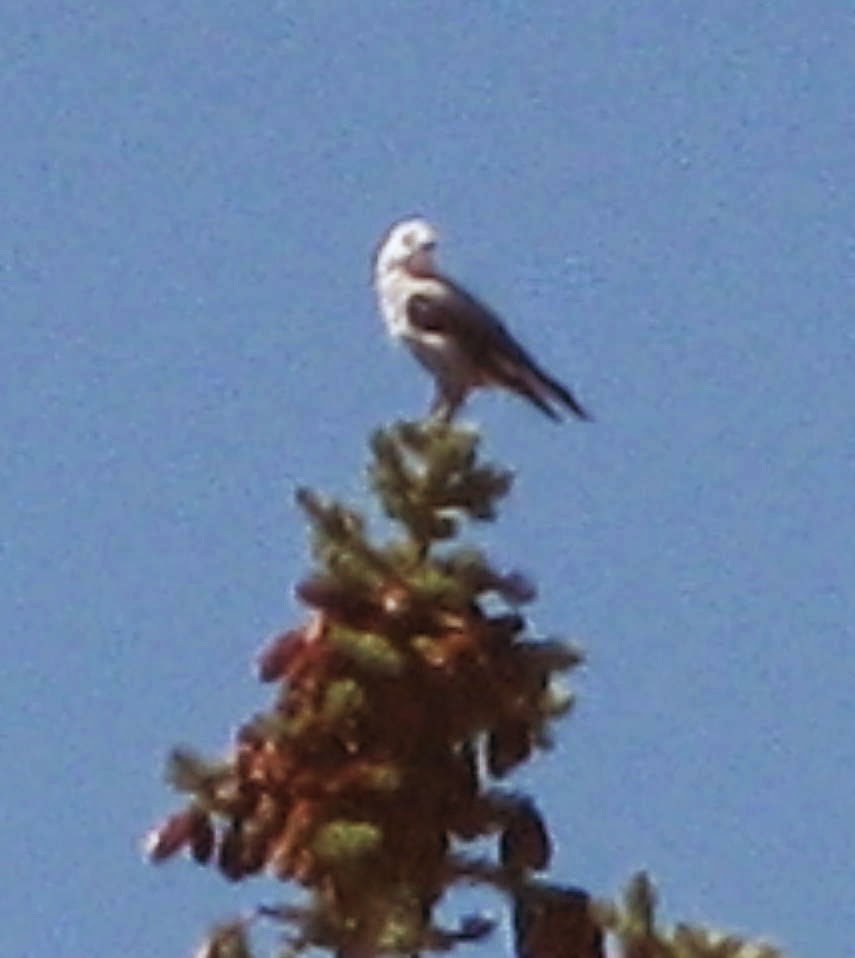 ...
LOST KEYS:
As I was hiking down, a woman was hiking up and stopped me. She was distraught and in her frantic state asked me for some help. She had lost her keys and had no idea where to look and how they all of a sudden were missing. She was wondering if I had seen them on the trail.  Unable to go anywhere since they were keys to her car and her home, she was stuck. I told her I had not seen them, but I would keep my eyes open for her in case I came across them. I continued hiking down and saw something shiny on a rock. It was a set of keys. I picked them up and noticed it had a white plastic barcode key tag on her keyring. I was stunned to see that it said City Creek on it. It was her membership to the City Creek Gym. There was a message for me on these lost keys.  I turned around and hiked back up to find this woman. I returned the keys to her. She was overwhelmed with gratitude that her keys had been restored to her. I asked if could take a picture to tell my wife this story. When I took the photo, I noticed the gold tree on her key ring.  I only noticed this once the keys were given back to her. This emblem looked like the Tree of Life. 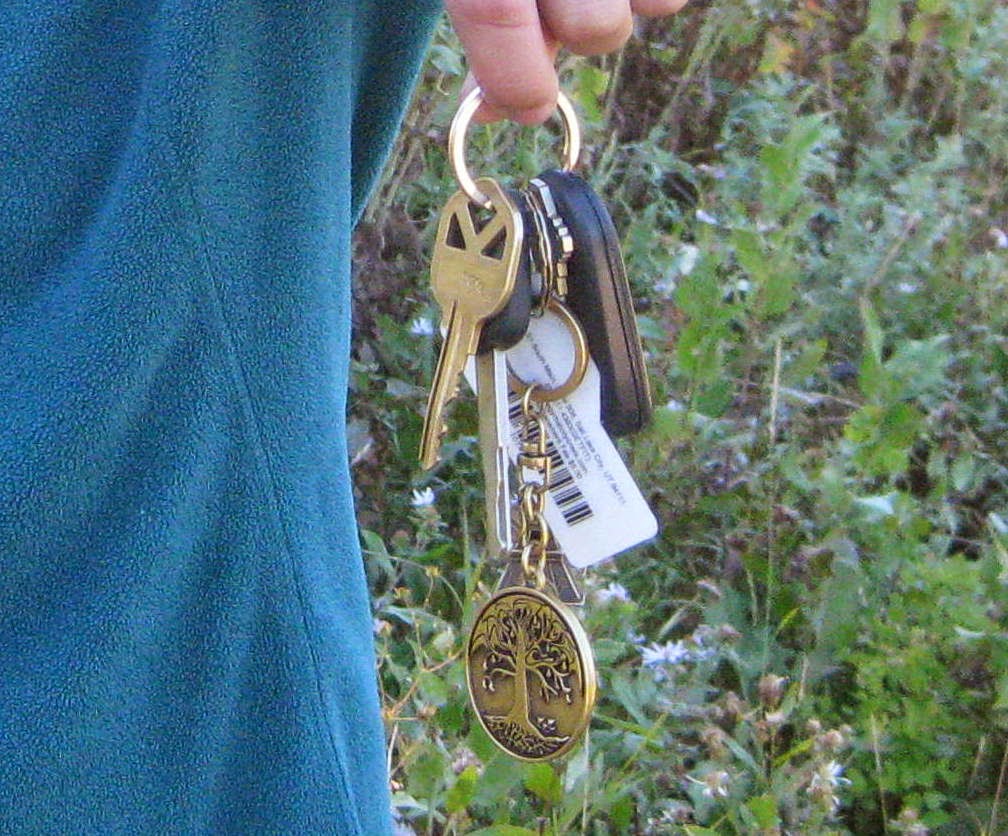 SUNFLOWERS:
I couldn't help but notice the abundance of sunflowers on my hike.  They radiant warmth and appear to be the happiest of flowers, and their meanings include loyalty and longevity. They are unique in their ability to provide energy in the form of nourishment and vibrance, an attribute which mirrors the sun and the energy provided by its heat and light. With brilliant yellow petals that surround the flower’s center, sunflowers have an unmistakable sun-like appearance. The  sunflowers open up and follow the Sun throughout the day. 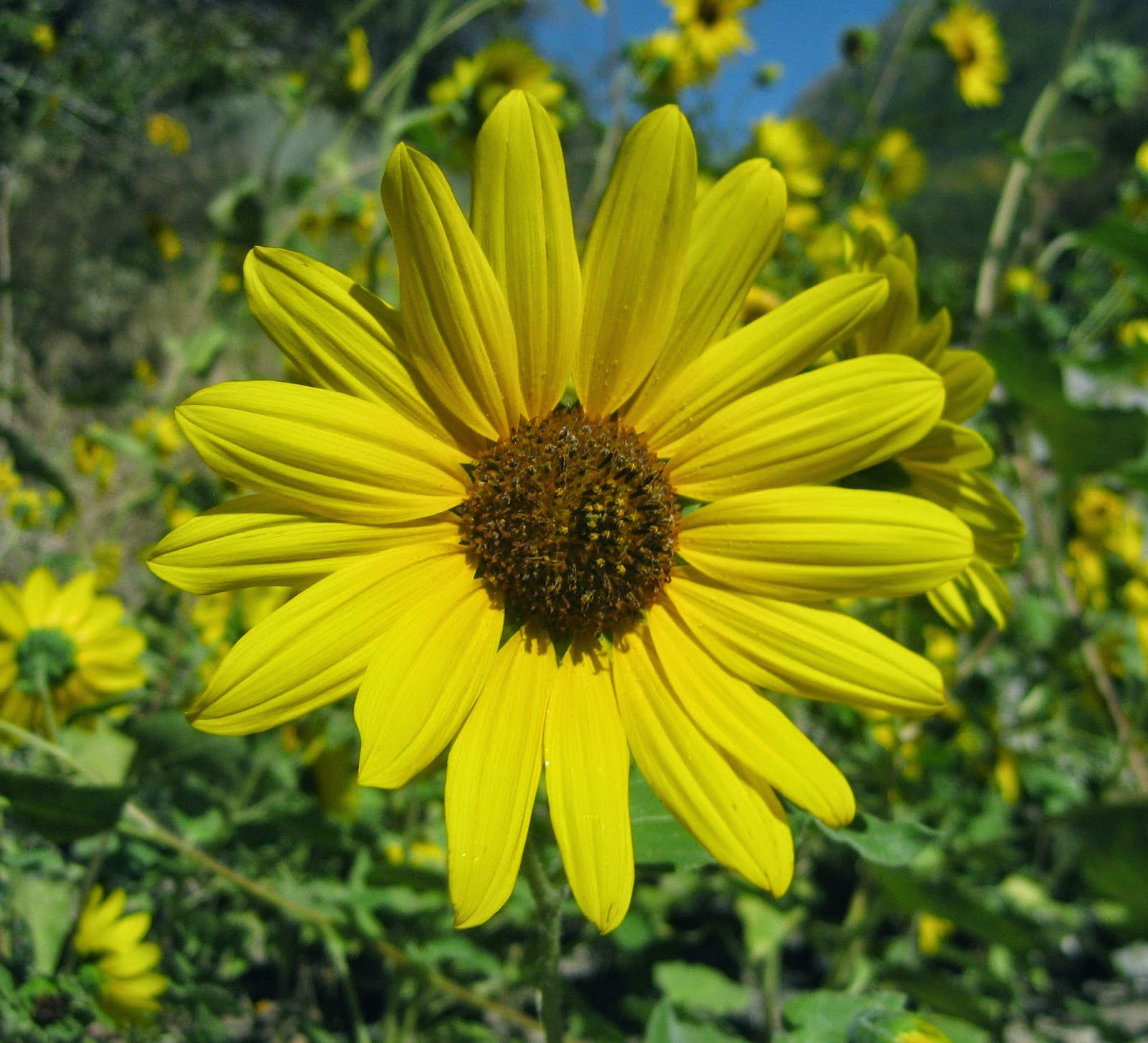 ...
LIVING WATER:
This last image is of Lake Katherine. It is the highest lake of the sister lakes up Big Cottonwood Canyon. It mirrors the sky in heaven. What is seen and done above is reflected down below in the water. ﻿ 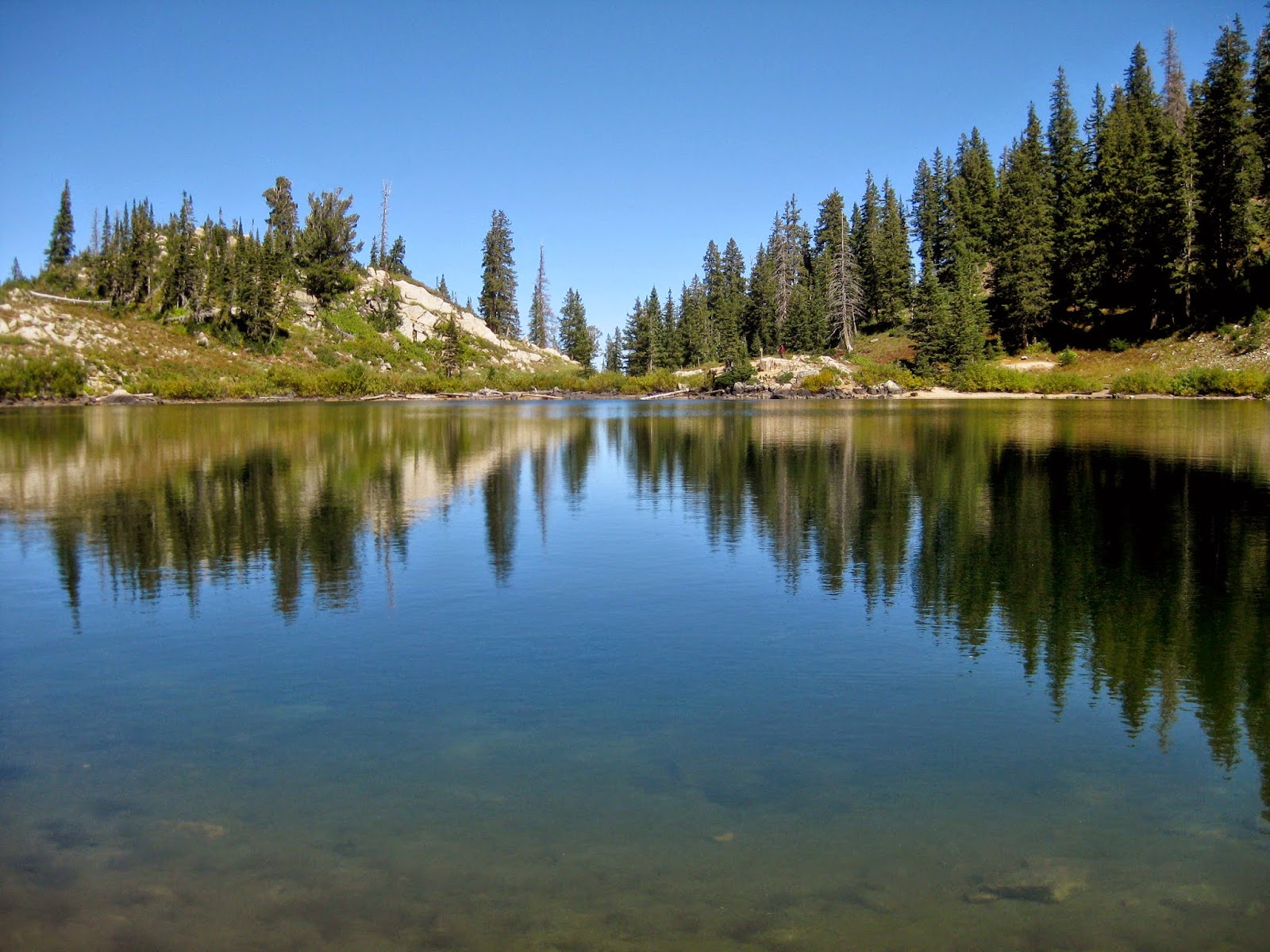