260: THE FATAL SHIFT: Leaders to Managers… Shepherds to Sheepherders.

In fall of 1983, Hugh Nibley gave a controversial  commencement address at the Brigham Young University. He was the professor emeritus of ancient scripture at the time. The speech was so controversial,  FARMS (BYU's Foundation for Ancient Research and Mormon Studies) did not want this speech included in the compilation book, "The Collected Works of Hugh Nibley".

His speech was entitled Leaders to Managers, The Fatal Shift.  He began his speech by saying, "Twenty-three years ago today, if you will cast your minds back, on this same occasion I gave the opening prayer in which I said: "We have met here today clothed in the black robes of a false priesthood . . ."

Here are a few more excerpts from his speech that I think are important to read and compare it to our situation today.

“Leaders are movers and shakers, original, inventive, unpredictable, imaginative, full of surprises that discomfit the enemy in war and the main office in peace. For managers are safe, conservative, predictable, conforming organization men and team players, dedicated to the establishment."

"The leader, for example, has a passion for equality. We think of great generals from David and Alexander on down, sharing their beans or 'maza' with their men, calling them by their first names, marching along with them in the heat, sleeping on the ground, and first over the wall. For the manager, on the other hand, the idea of equality is repugnant and indeed counterproductive. Where promotion, perks, privilege, and power are the name of the game, awe and reverence for rank is everything, the inspiration and motivation of all good men."

"Managers do not promote individuals whose competence might threaten their own position; and so as the power of management spreads ever wider, the quality deteriorates, if that is possible. In short, while management shuns equality, it feeds on mediocrity."

"On the other hand, leadership is an escape from mediocrity. For the qualities of leadership are the same in all fields, the leader being simply the one who sets the highest example; and to do that and open the way to greater light and knowledge, the leader must break the mold. “A ship in port is safe,” says Captain Hopper, speaking of management; “but that is not what ships were built for,” she adds, calling for leadership. True leaders are inspiring because they are inspired, caught up in a higher purpose, devoid of personal ambition, idealistic, and incorruptible.”


...
In my opinion, there are very few leaders in the world, and unfortunately we are inundated with an over abundance of managers. 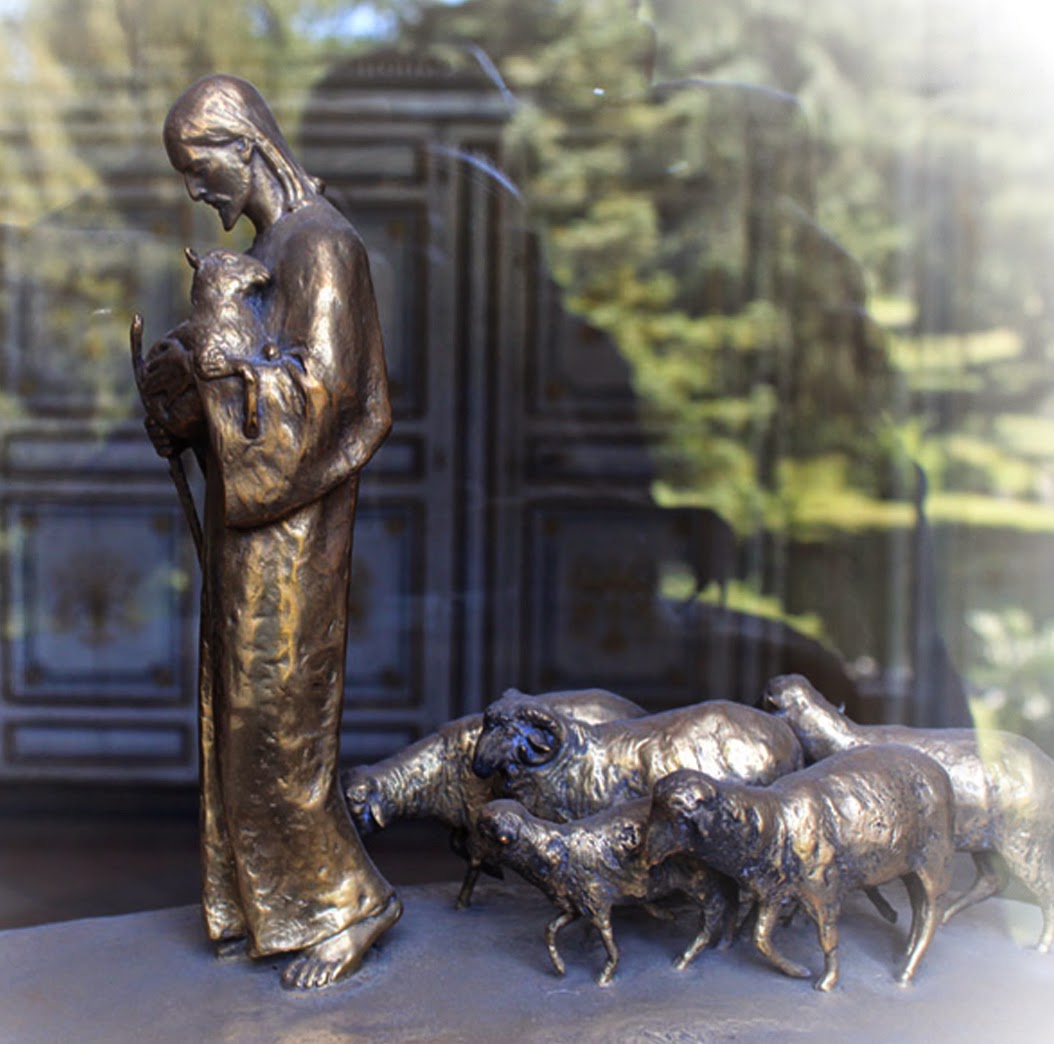 Above is a recent photo taken at the Vatican. It is beautiful bronze statue of Christ, the Good Shepherd. He holds in his arms a small lamb who lovingly looks up at Him. Following closely behind are those sheep who hear His voice. The flock consists of the male rams, female ewes, and little lambs. It is interesting that Christ is barefoot and not wearing any fine attire, but a simple robe. He also holds a staff rod, symbolic of His power.. but does not weld it.

In thinking about this some more, the thought came that Sheepherder usually use dogs to help herd and keep the sheep in order. The sheepdogs are trained to act on the sound of a whistle or word of command is given by the sheepherder. All herding behavior of these dogs is a modified predatory behavior. Through selective breeding, trainers have been able to minimize the dog's natural inclination to treat cattle and sheep as prey while simultaneously maintaining the dog's hunting skills, thereby creating an effective herding dog. There are a few efficient ways that the sheepdogs effectively keep the sheep under control. One way is for the sheepdog to stay in the rear and they typically nip/bite at the heels of the sheep. Another way if for the sheepdog who stays consistently in the front or head of the animals to turn or stop the sheep's movement, not allowing the sheep to go past them. Other ways is for the sheepdogs to use their loud, deep bark to control and maintain the sheep through intimidation.

Christ makes the point that He is not a sheepherder, but rather He says, "I am the good Shepherd."