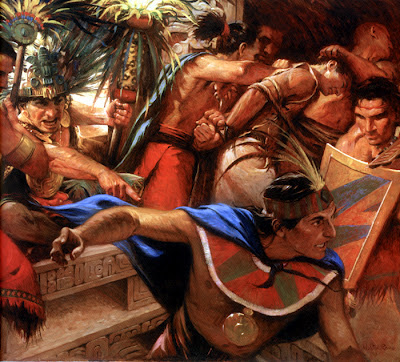 Abinadi prophesies that Noah and his people will be destroyed. The Lord will “deliver them into the hands of their enemies,” and “they shall be brought into bondage,” and “I will suffer them that they be smitten by their enemies” (vv. 21-24). This was the prophecy given to him of the Lord to utter. It was easy to be understood by all who would hear. Whether or not they understood how it was to be accomplished, Abinadi’s prophecy made the king and his priests angry precisely because they clearly understood what the message was.
Prophecy is not always this clear or easy to interpret before the prophesied event actually occurs, but once the event has happened it is apparent that it had been foretold by prophecy. There is a reason for this. Despite a perfect knowledge of all that is, was, and ever will be, the Lord must preserve the agency of man, and not allow prophecy to control the event (D&C 130:7). “Therefore, having some difficulty in attaching specific meaning to the prophecy is exactly in keeping with prophecy's traditional way of communicating an event” (Snuffer).

When it comes to a message of repentance however, and in communicating the necessary consequences for rejecting such a message, the Lord, in mercy, will always be very clear.

The Lord has been clear with us in the last days, just as he has in the past. The Book of Mormon has provided us with clear prophecies for our own day. 3 Ne. 16 contains what Hugh Nibley called the “great warning” and “great prophecy” of the Book of Mormon. The scriptures to which he referred are rarely considered.

The Lord says that the Father commanded him to say these things. The prophets prophesy declaring “thus saith the Lord.” Here we have the Lord himself prophesying declaring thus “saith the Father.” The prophecy states that “when the Gentiles shall sin against my gospel” (you can’t sin against the gospel unless you’ve got the gospel), “and shall reject the fullness of my gospel,” the “fullness” will be brought from among them. What does this mean? Has this prophecy uttered by Christ been fulfilled? If not, will it at some point be fulfilled? If not, why not? Is it because the Gentiles won’t be “filled with all manner of lyings, and of deceits, and of mischiefs, and all manner of hypocrisy,” but with honesty, truth, and virtue? Take a look around.

The prophecy goes on to say:

“But if the Gentiles will repent and return unto me, saith the Father, behold they shall be numbered among my people, O house of Israel.

“And I will not suffer my people, who are of the house of Israel, to go through among them, and tread them down, saith the Father.

“But if they will not turn unto me, and hearken unto my voice, I will suffer them, yea, I will suffer my people, O house of Israel, that they shall go through among them, and shall tread them down, and they shall be as salt that hath lost its savor, which is thenceforth good for nothing but to be cast out, and to be trodden under foot of my people, O house of Israel” (vv. 13-15).

Whether or not this occurs is dependent upon the willingness of the Gentiles to “repent and return unto [Christ], saith the Father.” Though the word “if” appears, granting unto the Gentiles a choice in the matter, Christ goes on to say that it is only after the house of Israel (the seed of Lehi) has been given “this land for their inheritance” that the words of the Prophet Isaiah “shall be fulfilled” (vv. 16-17).

Now back to Abinadi. There were two major consequences the people would face if they rejected the message to repent. The first is what we’ve already covered: they would be brought into bondage and smitten by their enemies. The other consequence of their failure to repent is that “when they shall cry unto me I will be slow to hear their cries,” and “I will not hear their prayers.”

In another place the Lord uses slightly different words to clarify the same intended consequence of Israel failing to repent:

“And when ye spread forth your hands, I will hide mine eyes from you: yea, when ye make many prayers, I will not hear” (Isa. 1:15).

Many books have been written, and many talks have been given in an attempt to help us all make some revelatory breakthrough. Too many of us are wondering why we can’t seem to get an answer from heaven, and think that if we eat more peas and shave every day it will do the trick. Good ideas are helpful, especially if based upon formulas given by the Lord in scripture (you might find a basis for eating peas in D&C 89, for example. You’ll have a harder time backing up modern Mormon culture with the scriptures, however). But unless you are willing to consider the reality of “your minds” being “darkened,” good ideas get you nowhere (D&C 84:54). The heavens will remain as brass over your head.

The Holy Ghost can teach us the truth of all things (Moro. 10:5). Even the light of Christ, which has been given to all men, will guide you into all truth. We should follow that light back to His presence.
Posted by BARE RECORD OF TRUTH at 10:57 AM 2 comments: