I wanted to share a few things. A Native American story about 2 wolves, a symbolic story about 2 eagles.. and a few passages of scripture. 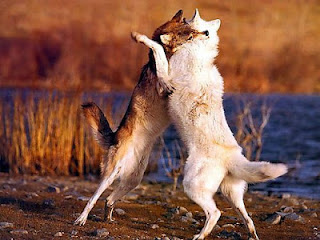 TWO WOLVES:
An old Grandfather said to his grandson, who came to him with anger at a friend who had done him an injustice, “Let me tell you a story”.

“I too, at times, have felt a great hate for those that have taken, so much, with no sorrow for what they do.
But hate wears you down, and does not hurt your enemy. It is like taking poison and wishing your enemy would die. I have struggles with these feelings many times.” He continued, “It is as if there are two wolves inside me. One is good and does no harm. He lives in harmony with all around him, and does not take offense when no offense was intended. He will only fight when it is right to do so, and in the right way.
But the other wolf, ah! He is full of anger. The littlest thing will set him into a fit of temper. He fights everyone, all the time, for no reason. He cannot think because his anger and hate are so great. It is helpless anger, for his anger will change nothing.
Sometimes, is it hard to live with these two wolves inside me, for both of them try to dominate my spirit.”
The boy looked intently into his Grandfather’s eyes and asked, “Which one wins, Grandfather?”
The Grandfather smiles and quietly said, “The one I feed.” 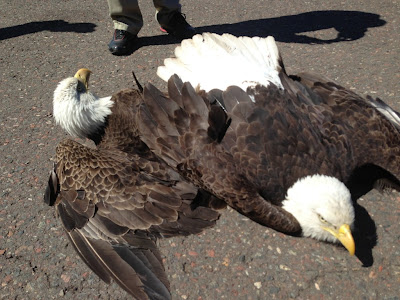 
There was a crash landing Sunday at the Duluth International Airport, but it didn’t involve airplanes. Rather, it was two bald eagles, which were fighting in midair when they locked talons. In a rare spectacle of nature, they were unable to disengage in time before crashing to the runway.

“Apparently, mature eagles will sometimes fight over territories,” Randy Hanzal, a Minnesota conservation officer said. “They will do battle in the air, crashing into each other and grabbing an intruding eagle with their talons. See photo below of two eagles with their talons intertwined. 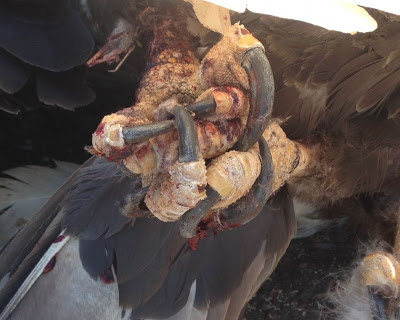 “Usually, they will let go of each other before hitting the ground, but in this case, they had the talons so deeply imbedded in each other they may have been unable to let go.”

Because neither Eagle would let go.. they both came crashing to the ground which could have killed both.

How often do we fight and do not let go. In the last days, it will be the wicked who destroy the wicked. What is our role as disciples of Christ?

One of my favorite stories in scripture is the conversion of Paul.  He is first referred to as Saul of Tarsus. He was born a Jew, "circumcised on the eight day, of the race of Israel, or the tribe of Benjamin, a Hebrew of Hebrew parentage, in observance of the law a Pharisee". He grew up in a strict Pharisee environment. He would have been considered "a righteous man".  Yet, he helped murder and imprison followers of Jesus Christ including the disciple Stephen.

On the Damascus Road, Saul was struck down by a blinding light. The men with Saul heard the sound but did not see the vision of the risen Christ that Saul did. Saul was blinded. For three days Saul was blind and did not eat or drink anything. Meanwhile, Jesus appeared His disciple Ananias and told him to go to Saul. Ananias laid his hands on Saul, and restored his sight. Paul then became one of the greatest teachers of the Gospel of Jesus Christ.

He is an example of once one has a testimony of Jesus Christ,  anger can be changed to love and the importance of possessing charity.

"And though I bestow all my goods to feed the poor, and though I give my body to be burned, and have not charity, it profiteth me nothing.
Posted by BARE RECORD OF TRUTH at 1:22 PM 2 comments: